In the last days, God will use the word to accomplish everything! In the words expressed by God, man’s true countenance is exposed. Evil shall return to evil; good shall return to good. Those who have accepted the work of God behold His true identity and status from His word, and then offer to cooperate with God. They’re spreading God’s name throughout the world so that people from all tribes and nations will exalt His holy name and acknowledge Him to be the God of all creatures. As for those resistant ones, they are also revealed in the judgment of God’s word, and thus receive God’s eternal chastisement. Finally, all things will be restored to what they were at the creation—the impure old world will come to nothing, and a holy new world will be built henceforth!

1. With God’s utterance deepening, He observes the situation of the entire universe. All things are being renewed because of God’s word. The heaven is changing, the earth is changing, and men are showing their true self. Gradually all men are after their kinds, and unconsciously, unconsciously they all return to their “family.” Thus God rejoices greatly. With God there is no disturbance. Unconsciously God’s work has been accomplished, and unconsciously all things have been changed.

2. When God created the world, He made all things after their kinds, so that all the physical things were grouped. When God’s management plan is about to end, He will restore the world to what it was at the creation and restore all things to what they originally were, thoroughly changing them, so that everything will come under God’s plan. The time has come! The last stage in God’s plan will soon be accomplished. The filthy old world! It is bound to fall in God’s word! It is bound to come to nothing because of God’s plan! All things! They will regain life in God’s word and have their “Ruler”! The holy, unblemished new world! It will surely be revived in God’s glory! Mount Zion! Do not be silent anymore; God has returned victorious! God observes the whole earth, observes the whole earth among all things; people on earth begin, begin their new life, their new life again and have a new hope.

3. God’s people! How can they not resurrect in God’s light? How can they not jubilate under God’s leading? The earth is shouting for joy, and waters are heartily laughing! The resurrected Israel! How can it not feel proud for God’s predestination? Who ever weeps? Who ever wails? The former Israel no longer exists, and the Israel of today has risen up in the world and has stood up in the hearts of all people. It will surely have the foundation for its existence because of God’s people! The hateful Egypt! Can it still resist God? How can it escape God’s chastisement because of God’s mercy? All those God loves will exist forever, and all those who resist God will be chastised forever, because God is a jealous God and will not lightly let go any doings of anyone. God will search the whole earth and will appear as righteousness, majesty, wrath, and chastisement in the East of the world, appearing to all men, appearing, appearing to all men!

In the End Time God Mainly Accomplishes Everything by His Word

The Way God Rules Over All Things

God’s Name Will Be Great Among the Gentile Nations 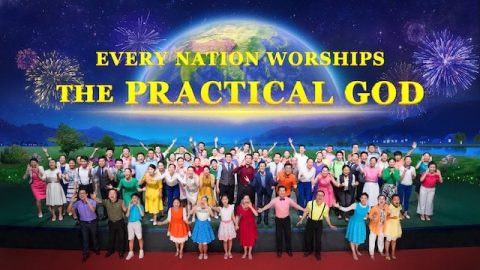 Musical Drama "Chinese Gospel Choir 19th Performance"
The work of God in the last days is to allow man to see the God in heaven live among men on earth, and to enable man to come to know, obey, revere, and love God.

Gospel Choir Song “Kingdom Anthem: The Kingdom Descends Upon the World”
The stirring kingdom anthem has rung out, announcing God’s arrival among man to the whole universe! The kingdom of God has come!

Gospel Choir Song “Kingdom Anthem: The Kingdom Descends Upon the World” Highlights IV
When the kingdom of God comes, the day desperately awaited by all nations and peoples shall finally arrive! At this time, what will be the scenes among all things in heaven and on earth?

2020 Christian Music Video “God Is the Beginning and the End”