Following Jehovah God’s questions to Satan, Satan was secretly happy. This was because Satan knew that it would once more be permitted to attack the man who was perfect in God’s eyes—which for Satan was a rare opportunity. Satan wanted to use this opportunity to completely undermine Job’s conviction, to make him lose his faith in God and thus no longer fear God or bless the name of Jehovah. This would give Satan a chance: Whatever the place or time, it would be able to make Job a plaything under its command. Satan hid its wicked schemes without trace, but it could not hold its evil nature in check. This truth is hinted in its answer to the words of Jehovah God, as recorded in the scriptures: “And Satan answered the LORD, and said, Skin for skin, yes, all that a man has will he give for his life. But put forth your hand now, and touch his bone and his flesh, and he will curse you to your face” (Job 2:4-5). It is impossible not to gain a substantive knowledge and sense of Satan’s maliciousness from this exchange between God and Satan. Having heard these fallacies of Satan, all those who love the truth and detest evil will undoubtedly have a greater hate of Satan’s ignobility and shamelessness, will feel appalled and disgusted by the fallacies of Satan, and, at the same time, will offer deep prayers and earnest wishes for Job, praying that this man of uprightness can achieve perfection, wishing that this man who fears God and shuns evil will forever overcome the temptations of Satan, and live in the light, and live amid God’s guidance and blessings; so, too, will they wish that Job’s righteous deeds can forever spur on and encourage all those who pursue the way of fearing God and shunning evil. Though Satan’s malicious intent can be seen in this proclamation, God breezily consented to Satan’s “request”—but He also had one condition: “he is in your hand; but save his life” (Job 2:6). Because, this time, Satan asked to stretch forth its hand to harm Job’s flesh and bones, God said, “but save his life.” The meaning of these words is that He gave Job’s flesh to Satan, but He retained his life. Satan could not take Job’s life, but apart from this Satan could employ any means or method against Job. 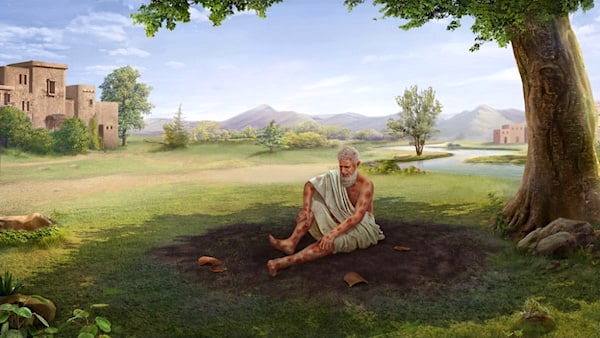 After gaining God’s permission, Satan rushed to Job and stretched forth its hand to afflict his skin, causing sore boils all over his body, and Job felt pain upon his skin. Job praised the wondrousness and holiness of Jehovah God, which made Satan even more flagrant in its audaciousness. Because it had felt the joy of hurting man, Satan stretched forth its hand and raked Job’s flesh, causing his sore boils to fester. Job immediately felt a pain and torment upon his flesh that was without parallel, and he could not help but knead himself from head to foot with his hands, as if this would relieve the blow to his spirit from this pain of the flesh. He realized that God was by his side watching him, and he tried his best to steel himself. He once more knelt to the ground, and said: You look within man’s heart, You observe his misery; why does his weakness concern You? Praised be the name of Jehovah God. Satan saw the insufferable pain of Job, but it did not see Job forsake the name of Jehovah God. Thus it hastily stretched forth its hand to afflict the bones of Job, desperate to tear him limb from limb. In an instant, Job felt unprecedented torment; it was as if his flesh had been ripped open from the bones, and as if his bones were being smashed apart bit by bit. This agonizing torment made him think it would be better to die. … His ability to bear had reached its limit. … He wanted to cry out, he wanted to tear at the skin on his body to lessen the pain—yet he held back his screams, and did not tear at the skin on his body, for he did not want to let Satan see his weakness. And so he knelt once more, but at this time he felt not the presence of Jehovah God. He knew that He was often before him, and behind him, and on either side of him. Yet during his pain, God had never watched; He covered His face and was hidden, for the meaning of His creation of man was not to bring suffering upon man. At this time, Job was weeping, and doing his best to endure this physical agony, yet he could no longer keep himself from giving thanks to God: Man falls at the first blow, he is weak and powerless, he is young and ignorant—why would You wish to be so caring and tender toward him? You strike me, yet it hurts You to do so. What of man is worth Your care and concern? Job’s prayers reached the ears of God, and God was silent, only watching without sound. … Having tried every trick in the book to no avail, Satan quietly departed, yet this did not bring an end to God’s trials of Job. Because the power of God revealed in Job had not been made public, the story of Job did not end with the retreat of Satan. As other characters made their entry, more spectacular scenes were yet to come.

Though Mankind Has Been Corrupted, He Still Lives Under the Sovereignty of the Creator’s Authority

Learn ways to strengthen your faith from Job, and you will have faith like Job in the midst of trials without complaining against God.

When I got the offer from the university, I knew that man's fate is in God's hand and I will trust in God and submit to the sovereignty of God in the future.
2:53:42

Yu Congguang preaches the gospel for the Church of Almighty God. While preaching the gospel, he was pursued by the Chinese Communist government.