Editor's note: Why did God personally give coats of skins to Adam and Eve for them to wear, but not do it with His mind? Do you know God’s intention within it? Read this article, and you will understand more about God’s love you didn’t know before.

I remembered that in the first biology class in middle school, our teacher once asked us what the mankind’s ancestors’ first piece of clothing was made of. At that time, my classmates offered various answers. Some said that it was made of grass; some said that it was made of linen. … I had ever come across an extracurricular book that mentioned this question, so I said with assuredness, “It was made of leaves.” My answer won the teacher’s affirmation and approval. And from then on I believed confidently that mankind’s ancestors used leaves to make their own first piece of clothing. 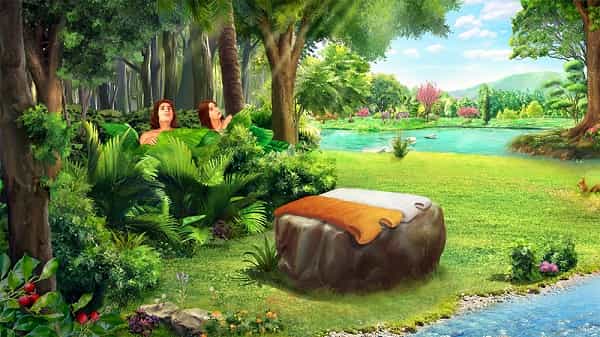 The image originated from the internet source

Afterward, I became a Christian. From the Bible, I knew: It was God that created this world and humanity. Later, tempted by the snake (Satan), mankind’s ancestors, Adam and Eve, betrayed God. And they were chased out of the Garden of Eden by God. At that time, God made the first piece of clothing for them. The Bible says, “And Adam called his wife’s name Eve; because she was the mother of all living. To Adam also and to his wife did the LORD God make coats of skins, and clothed them” (Genesis 3:20-21). Until then, I didn’t understand that the first piece of clothing of mankind’s ancestors wasn’t made of leaves, but made of animal skins and made by God. But as to why God did so, I had never taken this question to heart. In my view, it was so simple for God to make a piece of clothing, and He could do it with just one thought or one word, so it wasn’t of unique significance. By chance, I saw some information on a website, a lot of content of which is to share the pure knowledge of God. I had never gained them from any spiritual book or from any pastor or elder. In them, there is precisely a reading of God making clothes for man, “God created these two people and treated them as His companions. As their only family, God looked after their living and also took care of their basic necessities. Here, God appears as a parent of Adam and Eve. While God does this, man does not see how lofty God is; he does not see God’s paramount supremacy, His mysteriousness, and especially not His wrath or majesty. All he sees is God’s humbleness, His affection, His concern for man and His responsibility and care toward him. The attitude and way in which God treated Adam and Eve is akin to how human parents show concern for their own children. It’s also like how human parents love, look after, and care for their own sons and daughters—real, visible, and tangible. Instead of putting Himself in a high and mighty position, God personally used skins to make clothing for man. It doesn’t matter whether this fur coat was used to cover their modesty or to shield them from the cold. In short, this clothing used to cover man’s body was personally made by God with His own hands. Rather than creating it simply through the thought or miraculous methods as people imagine, God had legitimately done something man thinks God could not and should not do. This may be a simple thing some might not even think as worthy of mentioning, but it also allows all those who follow God but were previously full of vague ideas about Him to gain an insight into His genuineness and loveliness, and to see His faithful and humble nature. It makes insufferably arrogant people who think they are high and mighty bow their conceited heads in shame in the face of God’s genuineness and humbleness. Here, God’s genuineness and humbleness further enables people to see how lovable He is. By contrast, the immense God, lovable God, and omnipotent God in people’s hearts is so small, unappealing, and unable to withstand even a single blow. When you see this verse and hear this story, do you look down upon God because He did such a thing? Some people might, but for others it will be the complete opposite. They will think God is genuine and lovable, and it is precisely God’s genuineness and loveliness that moves them. The more they see the real side of God, the more they can appreciate the true existence of God’s love, the importance of God in their hearts, and how He stands beside them at every moment.”

“I hope when you understand the real side of God you will grow even closer to Him and be able to even more truly appreciate His love and care for mankind, while at the same time also give your heart to God and no longer have any suspicions or doubts toward Him. God is quietly doing everything He is for man, doing it all silently through His sincerity, faithfulness, and love. But He never has any apprehension or regret for all that He does, nor does He ever need anyone to repay Him in any way or have intentions of ever obtaining anything from mankind. The only purpose of everything He has ever done is so He can receive mankind’s true faith and love.”

These words moved me deeply. Reading between the lines, I felt God’s humbleness and affection. It was the first time that I felt I was too arrogant and ignorant. In the past, though I read the Bible in believing in the Lord, knew that God created the heavens and earth and all things and that He also created man, and knew His many deeds from the Bible, yet I did not have a true understanding of His reality and His will in everything He did, nor did I ponder over these things carefully. Thus when I read the words “To Adam also and to his wife did the LORD God make coats of skins, and clothed them” in the Bible, I only knew that God once made clothes for man but I didn’t understand His will of doing it. Now I know that the supreme God actually didn’t do it through the thought or any miraculous method, but He used animal skins to make clothes with His own hands for man who had betrayed Him, by which I was shocked deeply. After being corrupted by Satan, man began to evade God’s call purposely, and disobeyed Him and grieved His heart all the time. In spite of this, God, the supreme Ruler of all things, humbled Himself and made clothes for the corrupt man with His own hands. Through the subtle action, God told us humans that there is no way He will give up on us even if we are corrupted, and that He will save us thoroughly. For instance, in the past, because people could not overcome sins, they failed to keep the laws and commandments. They exchanged money and sold oxen, sheep and livestock in the temple, sullying the temple, and even offered lame sacrifices to God. As a result, they faced the end of being executed by the law. God couldn’t bear to see them devoured by sin. So God Himself was incarnated as a man and came among man, preaching the way of confession and repentance, and performing many miracles, such as healing the sick, driving out the demons, making the blind see, the lame walk and lepers cured, even bringing life to the dead, and so on. In the end, the Lord Jesus’ holy flesh was nailed to the cross and became the sin offering for all mankind. All that God did shows that He is determined to save us from the domain of Satan, and that He does it practically all the time. From this, we can see God’s genuineness and loveliness, and see that His desire to save us is actual.

Thank the Lord! I believe it is because the Lord led me to see the pure sermons on the Internet that I have this little bit of new knowledge of God. The apostle John once said, “And there are also many other things which Jesus did, the which, if they should be written every one, I suppose that even the world itself could not contain the books that should be written” (John 21:25). God’s way of life is really too abundant! There are actually many truths on this website that you cannot find in the Bible and that truly come from God. I decide to continue reading carefully on this website. May the Lord lead me to gain more spiritual results. Then I’ll continue to share them with brothers and sisters.

Read more on our Bible Study Guides page, or click on the related article below.

Tags: God’s Love The Story of Adam and Eve
Previous

Almighty God’s Love Is So Real

By Chen Yunfeng In 1990, my wife and I found grace in the sight of the Lord and returned to Him. We both pursued hard, and a year later, I was selecte…

"God, it’s Your great love that has saved me! My illness is in Your hands, so is my life. Thank you for guarding and keeping me all the time."

The story of a boy asking his mother for rewards provoked my thoughts: What is the difference between wholehearted service of God and transactional service?
20:00

A Narrated Reenactment of a Real-Life Story | "God's True Love"

God's word little by little enlightened her, guided her, and made her understand God's earnest intention in saving man, and she experienced God's true love of mankind …