When I was in senior high school, I learned from my teacher that Bible was a great work of literature in the world. Later, I found this book to know clearly, with curiosity, what had been written within. The moment I opened it, I caught sight of Chapter I Genesis. Then I, without thinking, read God’s creation of six days hastily. I wondered: Why are the words so repetitive in this world masterpiece? The most obvious repetition is the word “God saw that it was good,” which was repeated five times; how can it be addressed as a masterwork in the world? I felt puzzled at it.

A wonderful video of Genesis:

Thanks for the Lord’s grace. Later, I believed in the Lord Jesus, and was convinced that the heavens and earth and all things were created by God. However, I was still barely comprehensible for the reason why the words “God saw that it was good” in the Bible were repeated several times. Not until one day, when my friend gave me a spiritual book, did I know from it that, the words, simple and repetitive, contain the Creator’s evaluation and approval for all things in the universe created by Him. Moreover, I saw God’s authority and power from these words.

The Meaning of “God Saw That It Was Good”

“‘God saw that it was good,’ these simple, underappreciated words, so often ignored, are the words of the heavenly law and heavenly edict given to all creatures by God. They are another embodiment of the Creator’s authority, one that is more practical, and more profound. Through His words, the Creator was not only able to gain all that He set out to gain, and achieve all that He set out to achieve, but could also control in His hands all that He had created, and rule all things that He had made under His authority, and, furthermore, all was systematic and regular. All things also lived and died by His word and, moreover, by His authority they existed amidst the law that He had set forth, and none was exempt! This law began at the very instant that ‘God saw that it was good,’ and it shall exist, continue, and function for the sake of God’s plan of management right up until the day that it is repealed by the Creator! The unique authority of the Creator was manifested not only in His ability to create all things and command all things to come into being, but also in His ability to govern and hold sovereignty over all things, and bestow the life and vitality upon all things, and, moreover, in His ability to cause, once and for all eternity, all things that He would create in His plan to appear and exist in the world made by Him in a perfect shape, and a perfect life structure, and a perfect role. So too was it manifested in the way that the thoughts of the Creator were not subject to any constraints, were not limited by time, space, or geography.” Through the interpretation in this passage, I was able to understand the meaning of the words “God saw that it was good” in the Scriptures. Under the authority of God’s words, all things created by God came into being and stood fast, and were assumed a permanent form for all eternity, there being no need to modify. From the very beginning until today, all these different configurations of life have existed in the world. Because of God’s predestination, all beings, in their respective position, bring sorts of functions and uses into play, adhering to this unchanging law. Their existence all shows forth the Creator’s authority and power, and is the proof of the unique identity and status of the Creator. That God saw that they all were good means that God’s plan is perfect, that His power and wisdom are perfect, and that God’s authority is the only source by which He can accomplish the perfection. Therefore, the repeated words “God saw that it was good,” in fact, imply the infinite wisdom of God, which is unable to be fathomed by us human beings. From then on, I did not dare to despise and doubt these words, thinking there was no point in repeating them, but learned to experience and appreciate God’s words carefully. 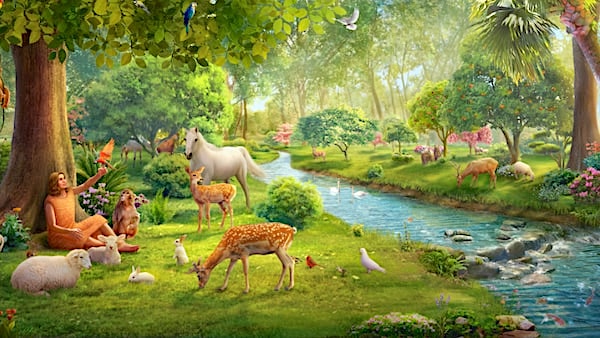 For all things created by Him, God saw that they were good, which I couldn’t help but associate with that God governs everything of man, and that both our families and jobs are arranged by Him. Regardless of whether or not we are pleased with them, we should not judge blindly, for God saw that they were good. What reasons do we have to find fault? I, before, wasn’t satisfied with my wife. Owing to her common appearance, and some of her thoughts, views and knowledge clashing with mine, I used to comment on and disparage her at will. Thus, we often fought against each other, resulting in hardly peaceful days in our home. But, since I knew God’s will within the words “God saw that it was good,” I tried to put down my own opinions and look at her in another point of view. To my surprise, I found she has many advantages that have not been discovered by me before. For instance, she is ordinary, which allows her to act dutifully, manage the household industriously and thriftily, look after our children carefully without complaint, leading our home life in perfect order. Although some of her words went against and repelled me, yet, thanks to her nagging words, I did not play cards and drink heavily any more, and gave up many other bad habits. … When rethinking profoundly in this way, I saw all that God had arranged for me was good, then I was ready to submit to God’s sovereignty and arrangement. And I began to look upon my wife as a mirror to reflect on myself and know my shortcomings, rather than make improper comments on her. From then onward, the fight between us came to an end, and our home welcomed a peaceful and quiet life. Thanks be to God! To us, getting to know every word of God carefully for His thoughts is a worthy pursuit. In this way, we can know God, allow His word to lead our life, honor Him as great in our hearts and always live before Him. If this is how it is, we can live under the care and protection of God, spending a happy and quiet life.

“God saw that it was good” means that all things that God had created were good and that God’s arrangements for our lives were good. Have you found God’s goodwill in His arrangements for our fate in your life? You are welcome to click on the button at the bottom right corner of the screen and discuss your thoughts with us.

Extended Reading:
Pray, Believe and Receive - Mark 11:24
Luke 1:37 - Verse Meaning - For With God Nothing Shall be Impossible

Tags: The Goodwill of God
Previous

Do you know what God’s will is behind the test and how to face the test? Read to learn more.

After Albee accepted God’s work, she encountered unfavorable things. So why did God allow temptations to befall her?

How shall we treat God’s trials when facing them? God’s words show us the way.

God used Moses after he was refined in the wilderness for 40 years. What had he gained from the refinement of 40 years? Now, what should we learn in trials?