How did the Bible come into being? What kind of book is the Bible?

“When the Age of Grace arrived, people had already been reading the Bible for generations, though they 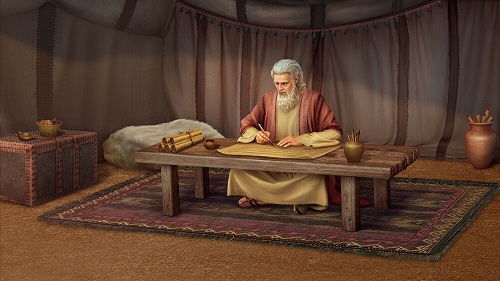 only had the Old Testament, not the New. People had been reading the Bible for as long as the Old Testament was in existence. After the period of Jehovah’s guidance, Moses wrote Genesis, Exodus, Deuteronomy, and so on, recollecting Jehovah’s work and committing it to paper. The Bible is a history book, and it also contains the words of the prophets, which, of course, are not history. It has several different parts, and is not just prophecies, records of Jehovah’s work, or letters from Paul. You should be familiar with the parts of the Bible. The Old Testament includes Genesis, Exodus … then the books of prophecy, concluding with the Book of Malachi, all of which records the work of the Age of Law under the guidance of Jehovah. From Genesis to the Book of Malachi, the Old Testament is a comprehensive account of Jehovah’s work in the Age of Law. The experiences of the people whom Jehovah led are all recorded there. During the Old Testament Age of Law, Jehovah raised up many prophets to speak His prophecies, instructing the people of all the tribes and clans, foretelling the work that He planned to do. These were people upon whom Jehovah bestowed the Spirit of prophecy. They saw visions and heard voices from Him, thereby receiving revelations to write prophecies. Their work was to express the voice of Jehovah, to prophesy on Jehovah’s behalf. When Jehovah worked then, He only guided people as the Spirit, and He was not incarnated; people could not see His face at all. And so He raised up these prophets to do His work, allowed them to receive oracles and reveal to all the tribes and clans of Israel. Their job was to utter prophecies, and some of them recorded Jehovah’s words for others to read. Jehovah raised them up to foretell the work that He would do or had not yet done, so that the people would see His wondrousness and wisdom. These books of prophecy are quite different from the other books of the Bible; they are words spoken or written by people who received the Spirit of prophecy, those who saw visions or heard voices from Jehovah. All the other books are records of Jehovah’s work written after the fact. These books are no substitute for the words of the prophets raised up by Jehovah; for example, Genesis and Exodus cannot compare with the Book of Isaiah or the Book of Daniel. The prophecies are words spoken before the work was done, and the other books are records of Jehovah’s work written afterward, an act of which human beings are capable. The prophets, receiving revelation from Jehovah, made some prophecies, said many words, foretelling things about the Age of Grace and the destruction of the world in the last days, that is, prophesying the work that Jehovah planned to do; the other books are all records of Jehovah’s work in Israel. So what one reads about in the Bible is mostly the work that Jehovah did in Israel. The Old Testament mostly records how Jehovah guided the Israelites—by means of Moses, He led them out of Egypt free from Pharaoh’s bondage, and into the desert, then into the land of Canaan. Then it describes their lives in Canaan, as well as Jehovah’s work in various parts of Israel. The Old Testament is a record of Jehovah’s work in Israel, where He created Adam and Eve. Beginning with Noah, when Jehovah began formally guiding mankind on earth, the Bible records only the work that He did in Israel. Why is there no record of God’s work outside of Israel? Because Israel is the birthplace of mankind; there were no countries outside of Israel then, and Jehovah did no work there. So the Bible records only God’s work in Israel. The words of the prophets—Isaiah, Daniel, Jeremiah, Ezekiel, and so on—foretold other work that would take place on earth, work that Jehovah God would do Himself. They came from God, and they were the work of the Holy Spirit. Except for the books of the prophets, all the other parts of the Bible are records of man’s experiences of Jehovah’s work.”

“Just what kind of book is the Bible, exactly? The Old Testament concerns God’s work in the Age of Law; it documents the work that Jehovah did in that age as well as Jehovah’s creation of the world. All of it is an account of Jehovah’s work, ending with the Book of Malachi. The two components of God’s work recorded in the Old Testament—the creation of the world and the promulgation of the law—were both done by Jehovah. The Age of Law is the work that represents God’s name, Jehovah, all of the work that was done primarily in the name of Jehovah. So the Old Testament records Jehovah’s work, and the New Testament records the work of Jesus, the work done primarily in Jesus’ name. What Jesus’ name signifies, and what work He did, are for the most part all recorded in the New Testament. In the days of the Old Testament, Jehovah built the temple and altar in Israel and guided the lives of the Israelites on earth, proving that the Israelites were His chosen people, the first group of people He selected on earth who were after His own heart, the first whom He led personally. In other words, the twelve tribes of Israel were His first chosen people, so Jehovah continued to work on them until the end of His work during the Age of Law. The second stage of God’s work—the work of the New Testament Age of Grace—He did in the tribe of Judah, one of the twelve tribes of Israel, thereby narrowing the scope of His work, because Jesus was God incarnate. He worked solely in the land of Judea, and for just three and a half years, which is why the records of the New Testament are so few compared to the Old. Jesus’ work in the Age of Grace is mostly recorded in the Four Gospels. The path walked by the people of that age was that of the most superficial transformation of life disposition; this is mostly documented in the epistles.”

“At that time, Jesus did much work, but His disciples did not understand, and Jesus did not explain; after He left, the disciples started to work and to preach everywhere, and to write epistles and gospels for the sake of that stage of the work. The Gospels of the New Testament were written twenty to thirty years after Jesus was crucified. Before this, the Israelites read only the Old Testament, which is to say that people in the Age of Grace had only the Old Testament to read. The New Testament did not exist until the Age of Grace; when Jesus was doing His work, there was no New Testament. It was only after His resurrection and ascent to heaven that people began recording His work and the Four Gospels were written, as well as the letters of Paul, the letters of Peter, and the Book of Revelation. Over three hundred years after the Ascension, people collected these writings and assembled them into the New Testament. It was only after Jesus’ work was done that the New Testament came into being, not before. God did much work, and the apostle Paul did much work. Later the letters of Paul and Peter were gathered together into the one book, which concluded with the record of the greatest vision that came to John on the isle of Patmos, because it prophesied the work of the last days. All this was arranged by future generations. This is not so with the ‘words’ of today. … Their writings are based on their own levels of literacy and their own caliber, and they are a record of human experiences, with each person recording things in a certain way, each person conveying a certain understanding of events, and so each account is different. So, how foolish you are, how utterly ignorant, if you worship the Bible as if it were God!”

We believe that God’s words are all in the Bible and that outside the Bible, there is no God’s revelation or word. Why is such a saying not right?

You say that Jesus has come, but we don’t believe it. Before He comes, He will surely give us a revelation first?

Q&A About The Inside Story Of The Bible (3)

Question 3 The Lord Jesus personally said that the Bible testified of Him. So, we must believe in the Lord according to the Bible. The Bible is the on…

Question 3: Did we not enter faith through the Bible? Do we not practice faith according to the Bible? We’ve not seen the Lord, so what do we base our…

Is the view ‘The Bible is the inspired word of God’ in accordance with facts? Is it based on God’s words? This article will confer with you together.