According to the prophecy of the Lord Jesus in Matthew 24:30: “and they shall see the Son of man coming in the clouds of heaven with power and great glory,” many brothers and sisters believe that the Lord Jesus will descend with clouds to receive His followers into the kingdom of heaven when He returns. But in fact, apart from the verses relating to the Lord’s descending with clouds in public in the Bible, there are still those mentioning the Lord will come in secret.

Recently, I studied the Bible and found that the scriptures concerning the second coming of the Lord could be roughly divided into two categories: One kind predicts that the Lord will descend with clouds and every single eye shall witness Him; the other foretells that the Lord will come like a thief, just as it is said in Matthew 25:6: “And at midnight there was a cry made, Behold, the bridegroom comes; go you out to meet him,” and in Revelation 3:3: “I will come on you as a thief.” From these verses we can see that there are two possible ways that the Lord shall come: One is that He’ll come as a thief and no one knows it, which means the Lord will come in secret. The other is that He’ll descend with clouds and be seen by all, which means the Lord will appear to all people publicly. According to my understanding, the Lord will probably come in secret first, and then will appear publicly after He has finished His work. It will be like when the Lord Jesus came to do His work: He was first incarnated as the Son of man and descended in secret. After completing His work, He was nailed onto the cross, after which He was resurrected and appeared to people for forty days, and then ascended to heaven.

Some brothers and sisters may say: The words “as a thief” and “midnight” here mean that nobody knows the time of the Lord’s second coming. They are not saying that the Lord will come in secret.

As to this question, I found that there’re many parts of the Bible predicting the second coming of the Lord will be “the coming of the Son of man.” Just as the Lord Jesus says in Luke 17:24-25: “For as the lightning, that lightens out of the one part under heaven, shines to the other part under heaven; so shall also the Son of man be in his day. But first must he suffer many things, and be rejected of this generation.” This “Son of man” refers to God’s incarnation. In this verse it also mentions that “But first must he suffer many things, and be rejected of this generation.” Since He must be forsaken by this generation, it’s very possible that this means the coming of God incarnate arrives in secret. Just as when the Lord Jesus came to do His work, nobody knew that He was the coming Messiah. People all regarded Him as an ordinary person, condemning Him and rejecting Him. If the Lord directly reveals Himself to all people in public when He returns, then He’ll not suffer for it and can’t be rejected by this generation. Therefore, I think “as a thief” and “midnight” doesn’t simply mean that no one knows the exact time of the Lord’s coming. They could well be referring to how the Lord will return as the Son of man, in secret.

We cannot neglect any matter involving the second coming of the Lord. We cannot define that the Lord will come again only with clouds according to one aspect of verses. Instead, we should investigate in many aspects. This is the only way that we won’t miss the chance to welcome the Lord’s return.

Maybe you also like to read: Does Anyone Know About the Second Coming of Jesus? 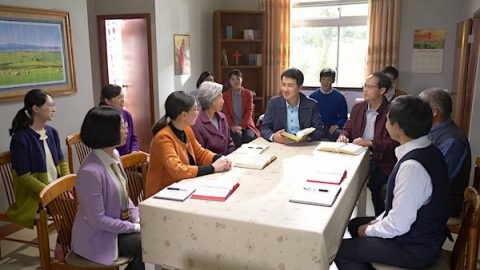 A New Exploration: In What Way Will the Second Coming of the Lord Happen?
Speaking of the way in which the Lord shall return, besides His public descent upon a cloud, maybe you have ignored the other way mentioned in the Bible. This article will tell you about it.