God created mankind; regardless of whether they have been corrupted or whether they follow Him, God treats human beings as His loved ones—or as human beings would say, the people dearest to Him—and not His playthings. Although God says He is the Creator and that man is His creation, which may sound like there is a bit of a difference in rank, the reality is that everything God has done for mankind far exceeds a relationship of this nature. God loves mankind, cares for mankind, and shows concern for mankind, as well as constantly and unceasingly provides for mankind. He never feels in His heart that this is additional work or something that deserves a lot of credit. Nor does He feel that saving humanity, supplying them, and granting them everything, is making a huge contribution to mankind. He simply provides for mankind quietly and silently, in His own way and through His own essence and what He has and is. No matter how much provision and how much help mankind receives from Him, God never thinks about nor tries to take credit. This is determined by the essence of God, and is also precisely a true expression of God’s disposition. This is why, regardless of whether it is in the Bible or any other books, we never find God expressing His thoughts, and we never find God describing or declaring to humans why He does these things, or why He cares so much for mankind, in order to make mankind be grateful toward Him or praise Him. Even when He is hurt, when His heart is in extreme pain, He never forgets His responsibility toward mankind or His concern for mankind, all while He bears this hurt and pain alone in silence. To the contrary, God continues to provide for mankind as He always does. Even though mankind often praises God or bears witness to Him, none of this behavior is demanded by God. This is because God never intends for any of the good things He does for mankind to be exchanged for gratitude or for it to be paid back. On the other hand, those who fear God and shun evil, those who truly follow God, listen to Him and are loyal to Him, and those who obey Him—these are the people who will often receive God’s blessings, and God will bestow such blessings without reservation. Moreover, the blessings people receive from God are often beyond their imagination, and also beyond anything human beings can exchange for what they have done or the price they have paid. When mankind is enjoying God’s blessings, does anyone care about what God is doing? Does anyone show any concern for how God is feeling? Does anyone try to appreciate God’s pain? The precise answer to these questions is: No! Can any human being, including Noah, appreciate the pain God was feeling at that moment? Can anyone comprehend why God would set up such a covenant? They cannot! Mankind doesn’t appreciate God’s pain not because they cannot understand God’s pain, and not because of the gap between God and man or the difference in their status; rather, it is because mankind doesn’t even care about any of God’s feelings. Mankind thinks God is independent—God doesn’t need people to care about Him, to understand Him or show Him consideration. God is God, so He has no pain, no emotions; He won’t be sad, He doesn’t feel sorrow, He even doesn’t cry. God is God, so He doesn’t need any emotional expressions and He doesn’t need any emotional comfort. If He does need these under certain circumstances, then He will resolve it Himself and won’t require any assistance from mankind. Conversely, it is the weak, immature humans who need God’s consolation, provision, encouragement, and even for Him to comfort their emotions, anytime, anywhere. Such a thought hides deep inside the hearts of mankind: Man is the weak one; they need God to look after them in every way, they deserve all the care they receive from God, and they should demand from God whatever they feel should be theirs. God is the strong one; He has everything, and He ought to be mankind’s guardian and bestower of blessings. Since He already is God, He is omnipotent and doesn’t ever need anything from mankind.

As man doesn’t pay attention to any of God’s revelations, he has never felt God’s sorrow, pain, or joy. But conversely, God knows all of man’s expressions like the palm of His hand. God supplies everyone’s needs at all times and in all places, observing each person’s changing thoughts and thus comforting and exhorting them, and guiding and illuminating them. In terms of all the things God has done on mankind and all of the prices He has paid because of them, can people find a passage in the Bible or from anything God has said until now that clearly states that God will demand something from man? No! To the contrary, no matter how people ignore God’s thinking, He still repeatedly leads mankind, repeatedly supplies mankind and helps them, to let them follow God’s way so they can receive the beautiful destination He has prepared for them. When it comes to God, what He has and is, His grace, His mercy, and all His rewards, will be bestowed without reservation upon those who love and follow Him. But He never reveals to any person the pain He has suffered or His state of mind, and He never complains about anyone not being considerate toward Him or not knowing His will. He simply bears all of this in silence, waiting for the day mankind will be able to understand.

Why do I say these things here? What do you see from the things I have said? There is something in God’s essence and disposition that is easiest to overlook, something that is only possessed by God and not by any person, including those others think of as great people, good people, or the God of their imagination. What is this thing? It is God’s selflessness. When we speak of selflessness, you might think you are also very selfless, because when it comes to your children, you never bargain with them and you are generous toward them, or you think you are also very selfless when it comes to your parents. No matter what you think, at least you have a concept of the word “selfless” and think of it as a positive word, and that being a selfless person is very noble. When you are selfless, you think you are great. But there is no one who can see God’s selflessness among all things, among people, events, and objects, and through God’s work. Why is that the case? Because man is too selfish! Why do I say that? Mankind lives in a material world. You may follow God, but you never see or appreciate how God supplies you, loves you, and shows concern for you. So what do you see? You see your blood relatives who love you or dote on you. You see the things that are beneficial to your flesh, you care about the people and things you love. This is man’s so-called selflessness. Such “selfless” people, however, are never concerned about the God that gives life to them. In contrast to God, man’s selflessness becomes selfish and despicable. The selflessness man believes in is empty and unrealistic, adulterated, incompatible with God, and unrelated to God. Man’s selflessness is for himself, while God’s selflessness is a true revelation of His essence. It is precisely due to God’s selflessness that man receives a steady stream of supply from Him. You might not be too deeply affected by this topic I am talking about today and are merely nodding in approval, but when you try to appreciate God’s heart in your heart, you will unwittingly discover: Among all the people, matters, and things you can sense in this world, only God’s selflessness is real and concrete, because only God’s love for you is unconditional and unblemished. Apart from God, anyone else’s so-called unselfishness is all fake, superficial, disingenuous; it has a purpose, certain intentions, carries a tradeoff, and cannot stand to be tested. You could even say that it is filthy, contemptible. Do you agree?

Excerpted from “God’s Work, God’s Disposition, and God Himself I”

“God's Work, God's Disposition, and God Himself I” (Excerpt 28)
God Makes the Rainbow as a Symbol of His Covenant With Man (Gen 9:11–13) And I will establish My covenant with you, neither shall all flesh be cut of… 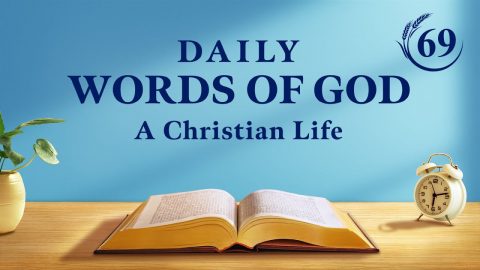 “The Seven Thunders Peal—Prophesying That the Gospel of the Kingdom Shall Spread Throughout the Universe” (Excerpt 69)
None have faith that they will see My glory, and I do not compel them, but rather remove My glory from mankind’s midst and take it to another world. W…

“God’s Work, God’s Disposition, and God Himself II” (Excerpt 36)
God Must Destroy Sodom (Gen 18:26) And Jehovah said, If I find in Sodom fifty righteous within the city, then I will spare all the place for their sak…

“God’s Work, God’s Disposition, and God Himself II” (Excerpt 35)
God’s Promise to Abraham (Gen 22:16–18) By Myself have I sworn, said Jehovah, for because you have done this thing, and have not withheld your son, yo…