For I say to you, That none of those men which were bidden shall taste of my supper.

As we all know, during the later stages of the Age of Law, since the human race had become more and more deeply corrupted by Satan, man lived in sin. He was not able to abide by the laws and faced the danger of being convicted and cursed by these laws. That is why the Lord Jesus came to be personally crucified as a sin offering for man and redeemed mankind through His precious blood during the Age of Grace, so that man could confess his sins, repent and be pardoned from his sins, thus exempting man from the conviction and the curse of the law. This way, man would be qualified to come before God and pray, and enjoy the abundant grace and truth of God.

Just as God says, “In the Lord Jesus’ heart, He was willing to offer Himself up for mankind, to sacrifice Himself. He was also willing to act as a sin offering, to be nailed to the cross, and He was eager to complete this work. When He saw the miserable conditions of human’s lives, He wanted even more to fulfill His mission as quickly as possible, without the delay of a single minute or second. When He had such a feeling of urgency, He was not thinking of how great His own pain would be, nor did He think any longer of how much humiliation He would have to endure—He held just one conviction in His heart: As long as He offered up Himself, as long as He was nailed to the cross as a sin offering, God’s will would be carried out and He would be able to commence new work. Mankind’s lives in sin, their state of existing in sin would be completely changed. His conviction and what He was determined to do were related to saving man, and He had only one objective: to carry out God’s will, so that He could successfully begin the next stage in His work. This was what was in the Lord Jesus’ mind at the time.” 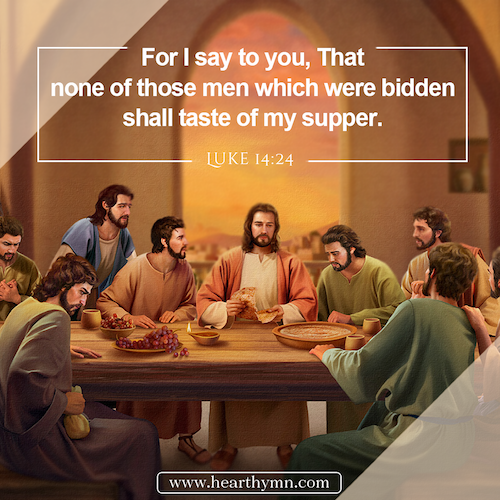 Always Ready For the Coming of the Son of Man - Matthew 24:44

Do Everything As Unto the Lord. A Commentary on Colossians 3:23

Trust in the Lord With All Your Heart - Proverbs 3:5

"Trust in the LORD with all your heart; and lean not to your own understanding" (Proverbs 3:5).

The Parable of the Wheat and the Tares - Matthew 13:29