“It turns out that these sufferings are brought on man by Satan, and occur after man has been corrupted by Satan …” This is a line of the protagonist in the movie Woe or Blessing, which has been popular on the Internet recently. And it has briefly and clearly clarified the source of man’s life of pain. By watching this movie, I truly understand how to live before we can have the most valuable and meaningful life. 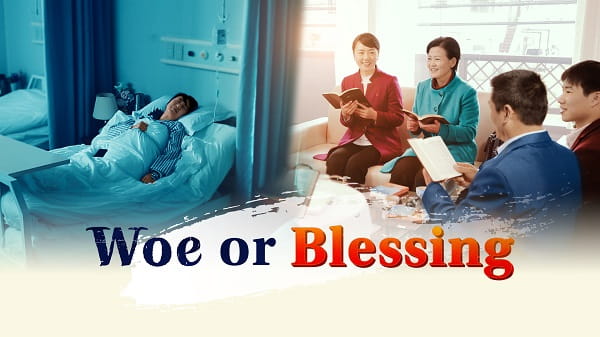 This movie relates the story of the protagonist, Du Juan. Due to her poor family, she was always discriminated against and ostracized by his peers from childhood. So she resolved to herself: When I grow up, I will produce wealth with my own two hands to live the best life and never be looked down upon. Later on, because her family lacked money, she had to drop out before finishing middle school. To make a living, she once worked in the pharmaceutical factory, sold the vegetables and fruits, and then ran a restaurant with her husband after marriage, but all of these efforts didn’t make her childhood dream come true yet. In the end, she learned the way of making money abroad from her friend. Led away by money, she immediately went abroad with her husband. She thought if she had money, her fate would be changed. Therefore, for the sake of the so-called dream and happiness, she worked hard to earn money, and finally she collapsed from fatigue in the strange country.

Du Juan lay in the hospital wing, feeling difficult to reach for the glass. Moreover, there was the possibility to be paralyzed and she would sit on the wheelchair for the rest of the life. Right when she was in pain and feeling helpless, she, shedding tears, cried out in her heart: For what do people live on earth? Just for earning money and living a good life? Could I gain happiness after earning money? Is it worth being full of illnesses for earning money? … Seeing this scene, I couldn’t help thinking my past.

When I was a child, my family was very poor and I was often discriminated against. My contemporaries all lived in apartments when they got married. But when I got married I lived in a small tile-roofed house of the 1980’s. After marriage, I was engaged in the construction job in order that I could live a better life and come to the top to be looked up upon. Originally, my salary was only more than 10 yuan one day. Later on, it rose up to over 20 yuan. Before long, the new urban area was developed, leading to higher wages, and my salary also rose from 20 yuan per day to 50 yuan. Money deeply attracted my heart. In order to earn more money, I was overloaded with manual labor every day. Not long after, I was not feeling well. But in order to go on making money and not delay my work, I simply took some pain pills to relieve the pain. Afterward, my illness gradually got worse, and my legs were so sore that I was unable to sleep well every day. When I felt miserable, I would hug my legs with my hands or took more pain pills to relieve the pain. Because I worked for a whole day, and in addition, I couldn’t sleep well at night, I felt very tired every day. But whenever I thought that I could earn over one hundred yuan a day, which was several times more than before, and that I just caught the good chance of making money, I was unwilling to easily give it up. Now my children were so young, and they would need much money in the future. For the sake of my children, for the sake of living a better life in the future, no matter how heavy the burden was or how tired I felt, I had to hold on. In this way, I had the motivation of earning money again and I was obliged to drag my exhausted body to go to work every day. Though I was loaded down with the overload of work, yet when I saw the money I had earned, I was very reluctant to have a day off, and even couldn’t spare the time to have a medical examination. I only thought of earning money. In this way, I was sucked into a whirlpool of money step by step. Before long, I got a wage increase again. My boss asked me to be a foreman, and I could drive people around for extra money at my leisure time, and my wife also worked with me. With these respectable incomes, our family condition immediately had a change. We bought an apartment, which was furnished with lots of furniture and electrical appliances. At that time, I turned from a “chicken” into a “phoenix” in our village. But I still didn’t feel satisfied. When I saw other people bought apartments in the town, my heart leapt in anticipation and then I had a new plan. However, because I was overworked over a long term and kept taking pain pills, my stomach pained me violently and I had incontinence. After the examination, I was told that I had had a spinal tumor and was very likely to be paralyzed from the waist down. This ominous news came as a bolt from the blue, making me fall into the abyss. My heart was terribly painful. Thinking back, in order to live the best life and be looked up to by others, I tried my best to earn money. I would have thought as long as I had money, I would gain happiness. But why did I fall to this point? Why after all do people live this life? Do we live just for earning more money? Now, I had money, but my health collapsed. So what was the use of possessing more money? … At that point, I extremely regretted that I simply went in for wealth even if I would sacrifice health. However, it was too late!

From my personal experience and this movie, I understand that money, fame and fortune is like a knife which is subtle but can kill man. Moreover, it is a pit into which Satan lures man. The sayings, such as “A wild goose leaves behind a voice; a man leaves behind a reputation,” “As long as I have money people will think highly of me,” “Money makes the world go round” and so on, are all the evil teachings and fallacies. Satan uses these invisible shackles to firmly control our thoughts. It makes us establish the incorrect goals in life at an early age, and contrive and beat our brains out to live for fame and fortune, even if we die for it.

I am one of the victims, and Du Juan, the protagonist in that movie, is also a living example. In order to satisfy my desire, I earned money with all my might, only to find that I not only couldn’t realize my dream, but also almost forfeited my life. Eventually, I not only spent all the money I had earned these years on my illness, but also was in debt. What I pursued didn’t make me happy, but made me feel exhausted and bitter.

Have a think: In real life, many people who are like me, in order to pursue the so-called happy life, try their best to earn money. They think if they have money, they will gain happiness; if they have money, they can enjoy high status and great wealth; if they have money, they can come to the fore and flaunt themselves for people to look up upon … “Money” becomes the only goal of man’s pursuit and the driving force of man’s living. And many people who are like me become the slaves of money thoroughly for the sake of earning more money. They not only sacrifice their own health and live in unspeakable pain, but also lose the courage to go on with their life. Now I understand that Satan is the perpetrator who causes these things. It is Satan that adopts many kinds of means to instill its incorrect survival methods and rules into us when we pursue our goals and ambitions. It entices us to live for our fame and fortune, making our ambition and desire become bigger and bigger. In order to pursue fame and fortune, people fight both openly and in secret with each other, living neither like man nor like ghost. Even if some people can enjoy temporary fame, profit, as well as pleasures, and live the life being looked upon by others, they have endured too much hardship and affliction behind glory. Living in the web which Satan weaves for mankind, they are in fear and trembling, unable to throw it off even if they want to.

It is gratifying for us to see that Du Juan have found the path to relief from the pain and welcomed the beautiful spring. This movie also makes me find the direction and goal of pursuit and makes me understand what true happiness is when I am at the brink of desperation. I also understand that only if we obey the Creator’s sovereignty and arrangement can we find the secret to happiness. No matter how much money one possesses and how lofty his position is, all he gains is all worldly things. None can bring them into the world and leave them behind. Even if we try our best to pursue fame and fortune, what we gain is still emptiness and pain and our ends are to be devoured by Satan.

A Hymn - Life’s Testimony - An Inner Feeling of Christians

Documentary Review: The One Who Holds Sovereignty Over Everything Showing You the Authority and Power by Which God Rules All Things 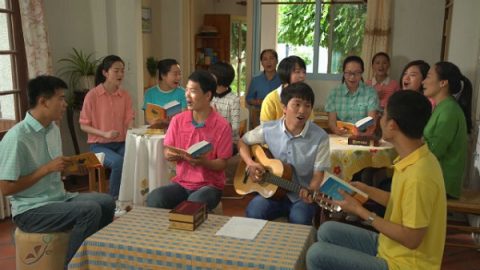 Review: Red Re-education at Home—Who Causes the Family Conflict?
The movie clearly shows audience the truth of the family conflict of believers in God, making them know the real reason why the believers in China have to abandon their families.

Christian Film Review: Break the Spell—The Analysis of the Story
Many Christians hold on to the notion that the Lord will return upon a cloud, and we firmly believe we will enter the kingdom of heaven by listening to the pastors and elders.