“Social trends and online gaming come from the devil Satan. … We also have no idea which demon invented online gaming, and there is no telling how many young people have been trapped or how many people have had their youth destroyed by it.” This is a line of Li Xiangming, the protagonist’s father in the short film Child, Come Back Home, which is a hit film on the Internet recently. This line tells us not only the origin of online games, but also the harm and consequence brought about by them to teenagers. 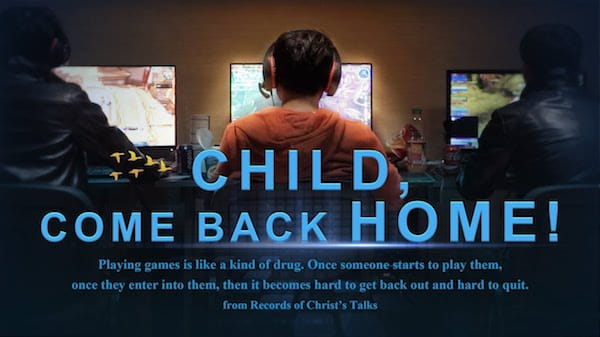 The film Child, Come Back Home tells the story about how the high school student Li Xinguang successfully overcomes his internet addiction. The protagonist Li Xinguang, used to be an obedient and mature student with excellent grades, who was very much loved by his parents and teachers. But after becoming obsessed with online games, he started frequently skipping school to go to internet cafes and sometimes even stayed there for several days. Gradually, he became more and more degenerate and downcast. After seeing this film, I couldn’t help thinking of myself.

Unknowingly, the trend of playing online games has arisen, and I, like many other teenagers, became one of those who pursued the trend. We internet-addicted teenagers have brought great interests to those who run internet cafes. So where there is a school, there are some internet cafes around it. At weekends, these internet cafes are full of people, 98% of whom are students obsessed with online games. “Who invented online games? Since they are so harmful, why does our society still develop and promote them?” Many times had I heard these painful complaints of parents, but I did not understand these parents’ feelings, nor did I ever give a thought to what they said. I just persisted in my old ways of playing online games. On every Friday night, we students, boys or girls, would scale the wall of our school and go to internet cafes to play online games all night. We usually would not go back to school until Sunday evening, and some even until Monday morning, which meant apart from attending classes, we spent all our spare time in internet cafes. Actually, at first, I didn’t play online games, but my classmates around me all played it and everything they talked about was related to the games. For fear of being outdated, I had to go with the flow, starting to play online games. But gradually, I became more and more addicted to them.

The game I played was League of Legends, a popular 3D multiplayer online fighting arena game conducted in a third person perspective, whose players can even receive a prize if they win a competition. At first, influenced by my classmates, I started to play the game. But because of my low level and poor equipment in the game, I was often challenged by other players and would be defeated soon. Unwilling to lose, I started to work out how to improve my skill, for only with good skill could I have more and better equipment, with which I could defeat my opponents and even compete to be the final winner. Driven by these thoughts, I would go to internet cafes to practice my skill as long as I had time. There was a period of time when I stayed in internet cafes every night, which cost me most of the living expenses given by my parents. Usually by Friday, after setting aside the money for going to internet cafes, I even had no money for eating; sometimes my classmates paid for my meals; sometimes I just went hungry. In spite of this, I was still unwilling to give up playing online games. Besides, my excellent grades dropped drastically and I even started lying to my parents. I felt distressed about such degenerate life but could not extricate myself. One time, I stayed in an internet cafe for over thirty hours without eating or drinking anything. The moment I walked out of the internet cafe, I felt dizzy by the strong sunlight and felt difficult to breathe, as though I was about to die, which frightened me a lot. So when I saw Xinguang’s classmate Feng Hao in the film unexpectedly died in an internet cafe after constantly playing online games for several days, I felt extremely sad and horrified; when I saw Feng Hao’s mother threw herself on his corpse and cried desperately, tears were streaming down my face: I felt sorry for Feng Hao, who was killed by online games; I felt pity for Feng Hao’s parents, who lost their only son in their middle age; I felt worried about Xinguang, who was paralyzed with fear by Feng Hao’s death; I also worried about myself and people of my age who were still lost in online games.

After seeing this film, I suddenly realized that online games are indeed a “killer.” I wondered: How many young lives have been claimed by online games? With this question, I searched for the relevant news on the internet.

It was reported: On the night of May 10, 2016, a 21-year-old man in Chongqing was found dead in his bed. According to the preliminary analysis, he died from being overtired. His family said that in the past six months, he went to internet cafes almost every day and often spent days and nights there.

On November 5, 2016, a 23-year-old Chinese young man unexpectedly died in front of the computer possibly because of being overtired after having been playing computer games for a long time without a break.

On February 23, 2017, a video game expert and network anchor in Virginia, USA challenged the 24-hour live broadcast game when participating in the “Make-A-Wish” charity fundraising. He died because of overwork.

Although similar tragedies keep playing out, the evil trend of playing online games is not prevented but keep spreading widely. In the 21st century, when the internet is developing rapidly, various online games are emerging in endlessly. It was after seeing this film that I came to realize that there are various things of devil such as violence, pornography, magic, hoaxes, tricks, and exchanges of money in the games. Outwardly online games are tools to earn money, but actually they are devil’s schemes to corrupt and devour us. When these things of devil enter into our life, who can resist the harm of Satan? Who can save us, the degenerate internet-addicted teenagers? Now from Li Xinguang’s experience of successfully giving up internet addiction in the film, I have found the path and seen the hope to kick my addiction. Dear friends, if you also want to kick internet addiction, then never miss the chance to see this short film.

Maybe you also like to read: Disclosing the Truth Behind Christians Forsaking Their Families

Movie Review of the Cover-up: Unmasking the Truth of the Implausible Death

In order to escape blame and cover up the truth, the police created the illusion of Song Xiaolan’s death, and tried to cheat the Song family. The Cover-up will unmask the truth of the implausible death.

Film Reviews: Understand the Moving Film Where Is My Home in 6 Minutes

A Christian film—Where Is My Home. This film was adapted from a Christian’s real-life experiences; this moving story is full of twists and turns and profoundly meaningful.

In the last days, Christians are all expecting that the Lord can return soon. When you hear the good news that God has returned, what will your reaction be?