Home » Bible Study » Bible Verse of the Day »
A wrathful man stirs up strife: but he that is slow to anger appeases strife.

A wrathful man stirs up strife: but he that is slow to anger appeases strife.

This verse warns us not to flare up easily when we face anything goes against our wishes, because a wrathful man easily stirs up strife. Matthew 18:22 recorded Jesus’ words to Peter, “Jesus said to him, I say not to you, Until seven times: but, Until seventy times seven.” God asked Peter to do so then, He also asks us to learn to forgive others. However, it is always easier said than done. Most of the time, when we encounter something and cannot take it anymore, we instantly fly into a rage. Why is it so? A passage says, “If someone does wrong by them or says some things they shouldn’t have said, such as words that judge them or doubt them, or offend them, they will be unforgiving, they will want revenge and to go tit for tat. Isn’t that vicious? … Kind people don’t have evil in their hearts. If you owe them, they won’t mind, but they won’t owe you anything because for them that’s definitely unacceptable. Plus, it’s not a problem if you offend them, but they would never want to offend you, let alone harm you. Isn’t that kind-hearted? When anyone does something unfavorable toward them, they can also put themselves in that person’s shoes and be considerate toward them, can forgive them, and understand them. This is also the expression of a kind heart. Some people committed a lot of evil in the past, but they now have faith in God and can pursue the truth, and further they can forgive others and treat them correctly and fairly. This type of person is classified as a kind-hearted person. Kind-hearted people have forbearance, mercy, forgiveness, and endurance in their hearts, and even more so they have love and sympathy. That is why everyone loves to be in contact with someone like this and is willing to make such a friend.” From this we can see, kind-hearted people can treat others correctly and fairly. They can understand others and won’t get angry even though other people did something wrong. Such a person is liked by God as well as people. Do you want to be such a person?

They stopped getting mad at others after they related to people according to God’s words. Read their testimonies.

•  Humbling Ourselves Benefits All People

•  White Sheep Was Dyed Black, From Anger to a Loving Heart 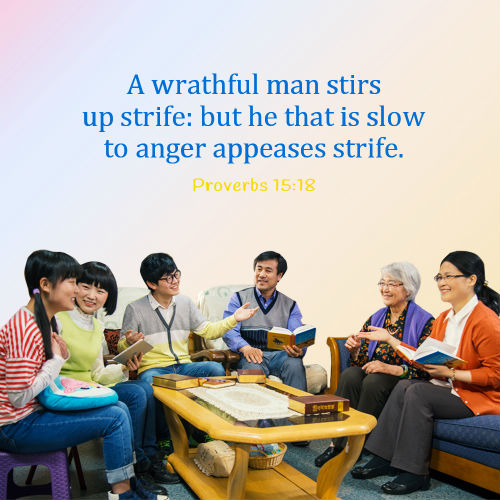 Trust in the Lord With All Your Heart - Proverbs 3:5

God's Blessings - Proverbs 10:22
We can learn from this verse that what God bestowed on us is enough for us to enjoy and we should not add sorrow.

The Prosperity of Fools—A Commentary on Proverbs 1:32
“For the turning away of the simple shall slay them, and the prosperity of fools shall destroy them.” (Proverbs 1:32)