You are here:Home » Christian Testimonies » Marriage & Family » Be Patient, Your Own Love Is on the Way

As people often say, “Marriage is fated but takes a lot of work,” which means although two people meet, know, and fall in love with each other by fate, they need to manage their relationship carefully to sustain a long-lasting one and then enter into a marriage.

Just like other girls in their twenties, Xiaonan also harbored many beautiful illusions about love, often imagining sweet scenes of living together with her future partner. With the firm belief that love needs care, she secretly told herself that if she found her own love, she must manage it carefully.

Later, she met Qiang by chance when she worked away from home. They, in the prime of youth, were attracted by each other and then fell in love. Like other young lovers, they sometimes would have quarrels and get a little angry with each other. In spite of this, Xiaonan still felt very happy and sweet every day, believing that she had found the love of her life. She affirmed Qiang to be her rock and her future partner, and never thought that they would break up. At that time, the girls of her own age around her often asked their boyfriends to buy all sorts of things; as long as their boyfriends didn’t satisfy their demands, they would ask for a breakup. But in Xiaonan’s heart, she thought that those material things the girls pursued were superficial and that nothing was more important than love. She firmly believed that as long as she managed her love carefully, she and Qiang would finally get married. So to achieve such a beautiful dream, she was silently devoting her efforts.

However, just when she was lost in visions of her wonderful future, Qiang suddenly disappeared without leaving any explanation, or even a single word, which threw her into a panic. She frantically searched for him, and called him again and again, only to receive the same reply, “Sorry, the subscriber you dialed is power off.” Her heart bled and she couldn’t reconcile herself to such a fact. Unable to figure out the reason, she screamed to herself: Why? I have been loyal to him all the time; unlike those snobby girls, I didn’t ever ask him for anything. But why did things get like this? Why was our love gone so quickly? Why did my previous efforts come to naught? What had I done wrong to deserve such a result? She asked herself these questions so many times, yet got no answer. During that time, she was plunged into darkness, crying all day long and living in a muddleheaded state.

However, life still went on. She told herself time and again to move on and that everything would be all right. But each time when looking back on her past, she would always lose her calm and shed tears, feeling a dull ache in her heart. In pain and sorrow, she thought that she would never find her true love.

Afterward, she found a job in a small restaurant. Though her salary was not high, she led an easy and quiet life. During that time, there were some people chasing her, but she gave no thought to all of them. Thinking that love was meaningless, she didn’t have the will to love again. When she thought that she would easily and quietly live such a single life, things were changed by peals of “special” laughter unexpectedly.

That was a period of time when there were more customers in the restaurant than usual, so she worked very late every day, thus getting up a bit later. Yet, almost every morning, when she was half awake, she often heard peals of annoying laughter from outside. Upon hearing the laughter, she would bury herself in the quilt, trying not to be disturbed. Actually, she didn’t know that her true love came.

One day when there were few customers in the restaurant, she suddenly heard the laughter again. Out of curiosity, she walked out of the door and saw several boys around twenty years old talking and laughing at the door of the maintenance store next to the restaurant. One of them seemed older than the others. Her eyes passed all other boys to rest on the older boy, who was about 5.8 feet tall in a white T-shirt with half a bottle of green tea beverage in his hand. Possibly because of having worked outdoors for a long time, he was dark-skinned. The more she looked, the angrier she felt. She thought to herself: It is you who laugh and laugh every morning. What’s so funny? You think you win the lottery? Just then, some customers came into the restaurant, which interrupted her thought, and then she went back to the restaurant to serve them.

As the store was just next to the restaurant, the boy often came to the restaurant to have meals with his colleagues. At first, out of courtesy, she greeted him with empty pleasantries. Gradually, as they became familiar with each other, she sometimes would joke with him. Through communication, she learned that he came from her hometown, which made them feel a sort of closeness to each other, and thus they had more communication. One day, he asked her half-jokingly, “Do you have a boyfriend?” Hearing this, she was a bit stunned. Then he continued, “Do you want me to set you up? How about my colleague?” She smiled and then politely rejected his offer, because her heart had been tightly closed for a long time. With the lapse of time, they had more and more contact with each other: He often told her the interesting things that happened around him at their leisure and sometimes invited her to go for an outgoing. He showed the utmost solicitude for her, treating her business as his own one; but she just regarded him as a friend, a homeboy, not having any particular thoughts about him.

However, her heart tightly locked was opened when he declared his love to her. Looking back on each and every detail about his concern and love for her, she was touched deeply. So she accepted his love and finally they got married. Though their life was not rich, their home was always filled with laughter and they were enveloped in happiness.

In the blink of an eye, several years passed. When they two talked about how they met, knew, and fell in love with each other, she believed from her heart that they were brought together by fate. Recalling the darkest days of her past, she could face it calmly. Looking at her husband, she knew he was the right one for her.

Later, one day, she saw God’s words saying: “Where you will go every day, what you will do, who or what you will encounter, what you will say, what will happen to you—can any of this be predicted? People cannot foresee all these occurrences, much less control how they develop. In life, these unforeseeable events happen all the time, and they are an everyday occurrence. … One encounters many people in one’s life, but no one knows who will become one’s partner in marriage. Though everyone has their own ideas and personal stances on the subject of marriage, no one can foresee who will finally become their true other half, and one’s own notions count for little. After meeting a person you like, you can pursue that person; but whether he or she is interested in you, whether he or she is able to become your partner, is not yours to decide. The object of your affections is not necessarily the person with whom you will be able to share your life; and meanwhile someone you never expected quietly enters your life and becomes your partner, becomes the most important element in your fate, your other half, to whom your fate is inextricably bound. … In these myriad marriages, humans reveal loyalty and lifelong commitment toward marriage, or love, attachment, and inseparability, or resignation and incomprehension, or betrayal of it, even hatred. Whether marriage itself brings happiness or pain, everyone’s mission in marriage is predestined by the Creator and will not change; everyone must fulfill it. And the individual fate that lies behind every marriage is unchanging; it was determined long in advance by the Creator.”

After seeing these words, Xiaonan finally understood this: Everyone’s marriage is in God’s hands. The person with whom one will share his whole life was determined long in advance by God, not by himself, for no one can transcend the sovereignty of God. I have deeply experienced this. I originally thought Qiang was the right one, but I was jilted by him; I never expected to meet my husband, but we finally got married. It can be seen that things were all determined and arranged long in advance by God, not by myself. In the past, not knowing God’s sovereignty, I firmly believed the saying “Marriage is fated but takes a lot of work,” thinking that I would gain a happy marriage as long as I managed my love with care and hard work. However, the result was unsatisfactory. Then, I lived in pain, unable to free myself. Now, I understand that I can’t harvest a happy marriage through my own effort, because my marriage is dominated and predetermined by God. Besides, the marriage God arranged for me is the best and the most suitable. Look at my husband; he not only cares about me as well as my family very much, but also supports my faith in God. At the thought of this, Xiaonan truly experienced God’s love and concern for her from the bottom of her heart, and that only by accepting God’s sovereignty and arrangements can she a created being live a relaxed and happy life.

I Inadvertently Found My Life Partner God Has Prepared for Me

Her Husband Had an Affair—What Should She Do?
After two decades of mutual support, Jingyi’s husband had an affair. However, her choice encouraged him to turn back. Read her story now. 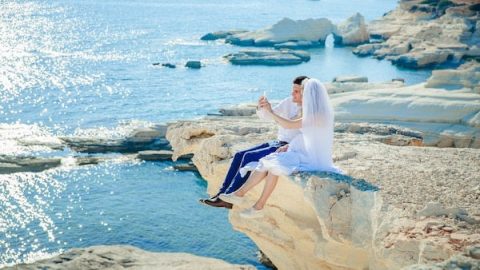 Without Romance in the Marriage Arranged by God, I Am Still Happy
She always thought only a marriage with romance is happy. However, when she obeyed the marriage arranged by God, she realized she is very happy even though there is no romance in her marriage.