Just after He created mankind, God began to engage with man and talk to man, and His disposition began to be expressed to man. In other words, from when God first engaged with mankind He began to make public to man, without cease, His substance and what He has and is. Regardless of whether earlier people or the people of today are able to see or understand it, in short God speaks to man and works among man, revealing His disposition and expressing His substance—which is a fact, and undeniable by any person. This also means that God’s disposition, God’s substance, and what He has and is are constantly issued forth and revealed as He works and engages with man. He has never concealed or hidden anything from man, but instead makes public and releases His own disposition without holding anything back. Thus, God hopes that man can know Him and understand His disposition and substance. He does not wish for man to treat His disposition and substance as eternal mysteries, nor does He want mankind to regard God as a puzzle that can never be solved. Only when mankind knows God can man know the way forward and be able to accept God’s guidance, and only a mankind such as this can truly live under the dominion of God, and live in the light, and live amid God’s blessings.

The words and disposition issued forth and revealed by God represent His will, and they also represent His substance. When God engages with man, no matter what He says or does, or what disposition He reveals, and no matter what man sees of God’s substance and what He has and is, they all represent God’s will for man. Regardless of how much man is able to realize, comprehend or understand, it all represents God’s will—God’s will for man. This is beyond doubt! God’s will for mankind is how He requires people to be, what He requires them to do, how He requires them to live, and how He requires them to be capable of accomplishing the fulfillment of God’s will. Are these things inseparable from the substance of God? In other words, God issues forth His disposition and all that He has and is at the same time as making demands of man. There is no falsity, no pretense, no concealment, and no embellishment. Yet why is man incapable of knowing, and why has he never been able to clearly perceive the disposition of God? And why has he never realized God’s will? That which is revealed and issued forth by God is what God Himself has and is, and is every shred and facet of His true disposition—so why can’t man see? Why is man incapable of thorough knowledge? There is an important reason for this. And what is this reason? Since the time of creation, man has never treated God as God. In the earliest times, no matter what God did with regard to man, the man that had just been created, man treated Him as nothing more than a companion, as someone to be relied upon, and had no knowledge or understanding of God. Which is to say, he did not know that what was issued forth by this Being—this Being whom he relied upon and saw as his companion—was the substance of God, nor did he know that this Being was the One who rules over all things. Simply put, the people of that time didn’t recognize God at all. They didn’t know that the heavens and earth and all things had been made by Him, and they were ignorant of where He came from, and, moreover, of what He was. Of course, back then God did not require man to know Him, or comprehend Him, or understand all that He did, or be informed of His will, for these were the earliest times following mankind’s creation. When God began preparations for the work of the Age of Law, God did some things to man and also began making some demands of man, telling him how to give offerings to and worship God. Only then did man acquire a few simple ideas about God, only then did he know the difference between man and God, and that God was the One who created mankind. When man knew that God was God and man was man, there became a certain distance between him and God, yet still God did not ask that man have a great knowledge or deep understanding of Him. Thus, God makes different requirements of man based on the stages and circumstances of His work. What do you see in this? What aspect of God’s disposition do you perceive? Is God real? Are God’s requirements of man fitting? During the earliest times following God’s creation of mankind, when God had yet to carry out the work of conquest and perfection on man, and had not spoken very many words to him, He asked little of man. Regardless of what man did and how he behaved—even if he did some things that offended God—God forgave it all, and overlooked it all. Because God knew what He had given man, and knew what was within man, thus He knew the standard of requirements that He should make of man. Even though the standard of His requirements was very low at that time, this does not mean that His disposition was not great, or that His wisdom and almightiness were but empty words. For man, there is only one way to know God’s disposition and God Himself: by following the steps of the work of God’s management and salvation of mankind, and accepting the words that God speaks to mankind. Knowing what God has and is, and knowing God’s disposition, would man still ask God to show him His real person? Man will not, and dare not, for having comprehended God’s disposition and what He has and is, man will have already seen the true God Himself, and will have already seen His real person. This is the inevitable outcome.

As God’s work and plan ceaselessly progressed onward, and after God established the covenant of the rainbow with man as a sign that He would never again destroy the world using floods, God had an increasingly pressing desire to gain those who could be of one mind with Him. So, too, did He have an ever more urgent wish to gain those who were able to carry out His will on earth, and, moreover, to gain a group of people able to break free from the forces of darkness, and not be bound by Satan, and able to bear testimony to Him on earth. Gaining such a group of people was God’s long-held wish, what He had been waiting for ever since the time of creation. Thus, regardless of God’s use of floods to destroy the world, or of His covenant with man, God’s will, frame of mind, plan, and hopes all remained the same. What He wanted to do, which He had yearned for long before the time of creation, was to gain those among mankind whom He wished to gain—to gain a group of people able to comprehend and know His disposition, and understand His will, a group who were able to worship Him. Such a group of people is truly able to bear testimony to Him, and they are, it can be said, His confidants.

“God’s Work, God’s Disposition, and God Himself II” (Excerpt 35)
God’s Promise to Abraham (Gen 22:16–18) By Myself have I sworn, said Jehovah, for because you have done this thing, and have not withheld your son, yo…

“God’s Work, God’s Disposition, and God Himself II” (Excerpt 36)
God Must Destroy Sodom (Gen 18:26) And Jehovah said, If I find in Sodom fifty righteous within the city, then I will spare all the place for their sak… 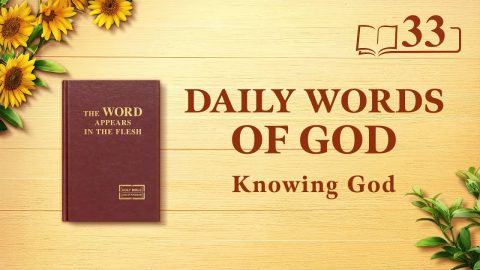 Daily Manna “God’s Work, God’s Disposition, and God Himself II” Excerpt 33
Recommended: • Man Can Only Be Saved Amidst God’s Management • Believers in God Should Prepare for Their Destination With Sufficient Good Deeds • B… 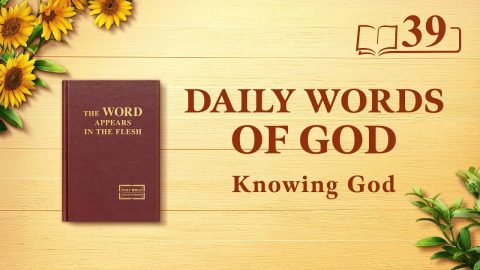 “God’s Work, God’s Disposition, and God Himself II” (Excerpt 39)
God’s Disposition Has Never Been Hidden From Man—Man’s Heart Has Strayed From God Since the time of creation, God’s disposition has been in step with …