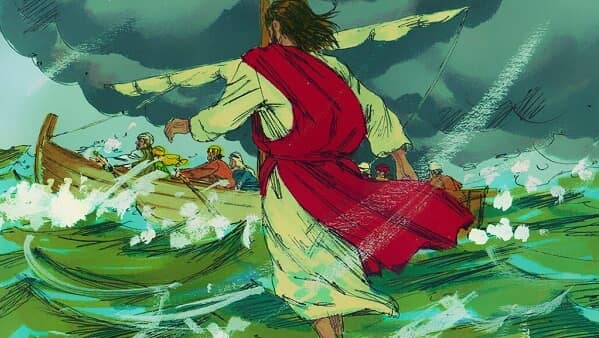 22 And straightway Jesus constrained his disciples to get into a ship, and to go before him to the other side, while he sent the multitudes away. 23 And when he had sent the multitudes away, he went up into a mountain apart to pray: and when the evening was come, he was there alone. 24 But the ship was now in the middle of the sea, tossed with waves: for the wind was contrary. 25 And in the fourth watch of the night Jesus went to them, walking on the sea. 26 And when the disciples saw him walking on the sea, they were troubled, saying, It is a spirit; and they cried out for fear. 27 But straightway Jesus spoke to them, saying, Be of good cheer; it is I; be not afraid.

28 And Peter answered him and said, Lord, if it be you, bid me come to you on the water. 29 And he said, Come. And when Peter was come down out of the ship, he walked on the water, to go to Jesus. 30 But when he saw the wind boisterous, he was afraid; and beginning to sink, he cried, saying, Lord, save me. 31 And immediately Jesus stretched forth his hand, and caught him, and said to him, O you of little faith, why did you doubt? 32 And when they were come into the ship, the wind ceased. 33 Then they that were in the ship came and worshipped him, saying, Of a truth you are the Son of God.

The miracles of Jesus. He Heals at Peter's House, Demons Cast into Pigs, The Healing Touch of Jesus, Jesus Heals a Paralytic, Two Blind Men and a Mute Man.

It is recorded in the Bible story of The Chief Priests Bribing the Soldiers to Fabricate Rumors that after the priests knew the Lord Jesus was resurrected, they bribed the soldiers to cover up the truth of the Lord’s resurrection.