In chapter 3, verses 13-–17 of Matthew, they read: “Then comes Jesus from Galilee to Jordan to John, to be baptized of him. But John forbade him, saying, I have need to be baptized of you, and come you to me? And Jesus answering said to him, Suffer it to be so now: for thus it becomes us to fulfill all righteousness. Then he suffered him. And Jesus, when he was baptized, went up straightway out of the water: and, see, the heavens were opened to him, and he saw the Spirit of God descending like a dove, and lighting on him: And see a voice from heaven, saying, This is my beloved Son, in whom I am well pleased.” Seeing these verses, Fengchun thought: “People at that time heard the way of repentance preached by John and then came to Jordan to be baptized of him because they were all sinners. But the Lord Jesus is Christ, the incarnate God, who is holy and sinless, so why was He baptized?” He felt very confused about it.

Later, he searched a gospel website for the answer. Thank the Lord for His preparations that a net friend sent him a passage of words extracted from a book.

Fengchun read seriously: “The words of God say, ‘At the beginning, when Jesus had yet to officially perform His ministry, like the disciples that followed Him, sometimes He also attended meetings, and sang hymns, gave praise, and read the Old Testament in the temple. After He was baptized and came up, the Spirit officially descended upon Him and began to work, revealing His identity and the ministry that He was to undertake. Prior to this, no one knew His identity, and apart from Mary, not even John knew. Jesus was 29 when He was baptized. After His baptism was completed, the heavens were opened, and a voice said: “This is My beloved Son, in whom I am well pleased.” Once Jesus had been baptized, the Holy Spirit began to bear testimony to Him in this way. Before being baptized at the age of 29, He had lived the life of an ordinary person, eating when He was supposed to eat, sleeping and dressing normally, and nothing about Him was different from others. Of course this was only to the fleshly eyes of man. … It was not right after the baptism of Jesus, which was also when the Holy Spirit officially began His work, that the Holy Spirit descended upon Him. The saying that the Holy Spirit descended like a dove upon Him is in reference to the official start of His ministry. The Spirit of God had been within Him before, but He had not begun to work, for the time had not arrived, and the Spirit did not start work rashly. The Spirit bore testimony to Him through baptism. When He came up out of the water, the Spirit began to officially work in Him, which signified that God’s incarnate flesh had begun to fulfill His ministry, and had begun the work of redemption, that is, the Age of Grace had officially started. And so, there is a time to God’s work, no matter what work He does. After His baptism, there were no particular changes in Jesus; He was still in His original flesh. It’s just that He started His work and revealed His identity, and He was full of authority and power. In this regard He was different from before. His identity was different, which is to say that there was a significant change in His status; this was the testimony of the Holy Spirit, and was not the work done by man. … After bearing testimony, the Holy Spirit had to uphold this testimony, and so He had to manifest His wisdom and authority in Jesus, which was different from in times past. Of course, this was not the effect of the baptism; baptism is merely a ceremony, it is just that baptism was the way to show that it was time to perform His ministry. Such work was in order to make plain the great power of God, to make plain the testimony of the Holy Spirit, and the Holy Spirit would take responsibility for this testimony until the very end.’”

After reading these words, Fengchun felt enlightened: They made it so clear why the Lord Jesus was baptized. So, he read them over and over again. From this passage of words, he understood the reason why the Lord Jesus was baptized though He is Christ is merely because God intended to use this way and this ceremony to testify that the Lord Jesus is Christ, the incarnate God. After that, the Holy Spirit began to officially work in Him, that is, the Lord Jesus officially began His work of the Age of Grace. If He was not baptized and directly began to work, then no one could recognize that He is God Himself.

Before baptism, the Lord Jesus was the same as an ordinary person. He also went to the temple to attend meetings, sing hymns, give praise, and so on, but He didn’t do any work there. Therefore, people in the temple only saw that He was of more intelligence than ordinary ones, but none of them knew He is God. Although in the end of the Age of Law, there was a prophecy saying: “For to us a child is born, to us a son is given: and the government shall be on his shoulder: and his name shall be called Wonderful, Counselor, The mighty God, The everlasting Father, The Prince of Peace” (Isa 9:6), and the Jews knew that a Messiah was coming, no one then directly recognized that the Lord Jesus is God. So, the Spirit openly testified that He was the beloved son of God when He was baptized and came up out of the water. Just as the Bible says, “And Jesus, when he was baptized, went up straightway out of the water: and, see, the heavens were opened to him, and he saw the Spirit of God descending like a dove, and lighting on him: And see a voice from heaven, saying, This is my beloved Son, in whom I am well pleased” (Mat 3:16-17). From that point, the Holy Spirit began to officially work in Him and revealed to man that the incarnate Lord Jesus officially began to work and to perform His ministry—the Age of Grace officially started. The Lord Jesus bestowed bountiful grace on man, and performed many signs and wonders, such as making the blind see and the lame walk, resurrecting Lazarus, feeding five thousand people with five loaves of bread and two fish, and so on. These allowed people to see that the Lord Jesus, after His baptism, had authority and power. Also, He broke the laws and rules and brought man new practices. For example, on the Sabbath, He did not enter the temple or observe the Sabbath, but led His disciples to work and preach as usual, and when they got hungry they plucked and ate ears of grain. His work freed people from the shackles of the law. From this we can see: The baptism of Jesus was a way or a ceremony used by God to bear testimony to Him as the incarnation of God. After that, the Lord Jesus officially began to perform His ministry and do His work of the Age of Grace. Only in this way could man recognize Him, or else nobody could acknowledge that the Lord Jesus is God. In fact, no matter whether before or after the baptism, He is the incarnate God, and is that God’s Spirit is realized in the flesh; this is unquestionable.

Receiving this light, Fengchun, as if stepping into the sun, became clear about why the Lord Jesus was baptized though He is Christ. He sighed in his heart: It turns out that everything God does contains within it His plan, His thoughts, His disposition, and His wisdom. We tiny humans really cannot fathom them. It is so meaningful that the Lord Jesus, though He is Christ, was baptized. I really thank God for His enlightenment and guidance so that I can get this light.

Maybe you also like to read: Jesus Christ Is Baptized by John – Matthew 3:13-17

Can Man Be Saved After the Baptism? 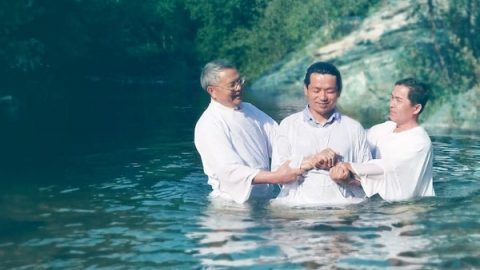 Why Being Baptized Doesn’t Mean We Are Reborn

If Baptism Means Being Reborn, Why Do Christians Still Sin?

How Much Do You Know About Baptism? 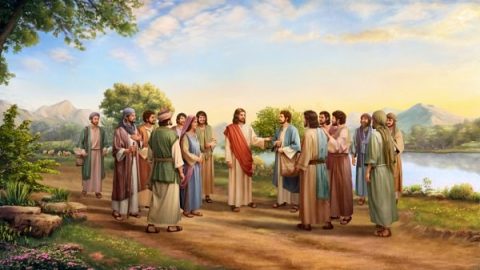 Is Jesus God or Son of God? Get the Answer From 4 Aspects
If you don’t know whether Jesus is God or the Son of God, you can get the answer from this article.

What Does Christ Mean? Is Christ the Anointed One?
Does Christ refer to the anointed one? The prophets in the Bible were also anointed, but why were they not Christs? Just what does Christ mean?