One day, when Sister Wang and I were studying the Bible, I came across these verses again. Then I raised the question.

Then, she read two passages of words to me, “The incarnate God is called Christ, and Christ is the flesh donned by the Spirit of God. This flesh is unlike any man that is of the flesh. This difference is because Christ is not of flesh and blood; He is the incarnation of the Spirit. He has both a normal humanity and a complete divinity. His divinity is not possessed by any man. His normal humanity sustains all His normal activities in the flesh, while His divinity carries out the work of God Himself. Be it His humanity or divinity, both submit to the will of the heavenly Father. The essence of Christ is the Spirit, that is, the divinity. Therefore, His essence is that of God Himself.”

“The Spirit within Jesus, the Spirit in heaven, and the Spirit of Jehovah are all one. It can be called the Holy Spirit, the Spirit of God, the sevenfold intensified Spirit, and the all-inclusive Spirit. The Spirit of God can carry out much work. He is able to create the world and destroy it by flooding the earth; He can redeem all mankind, and moreover, He can conquer and destroy all mankind. This work is all carried out by God Himself and cannot have been done by any other of the persons of God in His stead. His Spirit can be called by the name of Jehovah and Jesus, as well as the Almighty. He is the Lord, and Christ. He can also become the Son of man. He is in the heavens and also on the earth; He is on high above the universes and among the multitude. He is the only Master of the heavens and earth! From the time of creation until now, this work has been carried out by the Spirit of God Himself. Be it the work in the heavens or in the flesh, all is carried out by His own Spirit. All creatures, whether in heaven or on earth, are in the palm of His almighty hand; all of this is the work of God Himself and can be done by no other in His stead. In the heavens, He is the Spirit but also God Himself; among men, He is flesh but remains God Himself.”

After reading, she said, “Ever since mankind was corrupted by Satan, God has begun His management plan to save mankind. In the Age of Law, God called Moses to set forth the law and lead the Israelites to live on earth, and let them know how to worship God. All these were done by Jehovah God through the means of the Spirit. But in the latter days of the Age of Law, man became more and more corrupt, and often violated the law and did the things that offended Jehovah, which put them in danger of being condemned and executed by the law. Therefore, on the basis of man’s needs, God came to earth in the flesh as the Son of man, and performed the work of crucifixion to redeem mankind. In truth, the Lord Jesus is the flesh in which God’s Spirit is realized. From His appearance, the Lord Jesus was an ordinary man, but He concluded the Age of Law, initiated the Age of Grace, expressed God’s compassionate and loving disposition, and fulfilled the work of mankind’s redemption. At the same time, He manifested many miracles. For example: One word from the Lord Jesus was enough to bring the dead back to life, and one word calmed the wind and the sea. The Lord Jesus used five loaves and two fish to feed five thousand people. … These fully reveal God’s authority and power. The work the Lord Jesus performed can’t be done by any man. These facts prove: The Lord Jesus Christ is the Spirit of God realized in His flesh, and He is the utterly complete God Himself, so He and Jehovah God are one. This is the true meaning of the Lord Jesus’ words: ‘he that has seen me has seen the Father.’”

Hearing her fellowship, I felt that there was light in it. It turns out that the Lord Jesus Christ is the incarnate flesh of God and He is God Himself, but not the Son of God. In order to redeem man from sins, God became flesh as the Son of man and did the work of crucifixion. This is God’s great love for mankind. But I still had a question which confused me, so I asked her: “Why did the Lord Jesus call the God in heaven Father?” 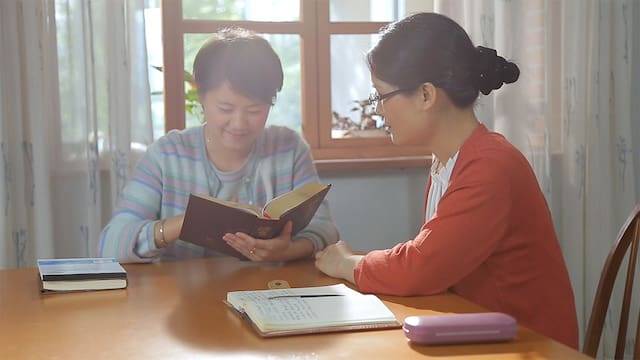 She said, “Let’s read a passage of words, and then you will understand: ‘When Jesus called God in heaven by the name of Father as He prayed, this was done only from the perspective of a created man, only because the Spirit of God had put on an ordinary and normal flesh and had the exterior cover of a created being. Even if within Him was the Spirit of God, His exterior appearance was still that of a normal man; in other words, He had become the ‘Son of man’ of which all men, including Jesus Himself, spoke. Given that He is called the Son of man, He is a person (whether man or woman, in any case one with the exterior shell of a human being) born into a normal family of ordinary people. Therefore, Jesus calling God in heaven by the name of Father was the same as how you at first called Him Father; He did so from the perspective of a created man. Do you still remember the Lord’s Prayer that Jesus taught you to memorize? ‘Our Father in heaven….’ He asked all man to call God in heaven by the name of Father. And since He too called Him Father, He did so from the perspective of one who stands on an equal footing with you all. Since you called God in heaven by the name of Father, this shows that Jesus saw Himself to be on equal footing with you, and as a man on earth chosen by God (that is, the Son of God). If you call God Father, is this not because you are a created being? However great the authority of Jesus on earth, prior to the crucifixion, He was merely a Son of man, governed by the Holy Spirit (that is, God), and one of the earth’s created beings, for He had yet to complete His work. Therefore, His calling God in heaven Father was solely His humility and obedience. His addressing God (that is, the Spirit in heaven) in such a manner, however, does not prove that He was the Son of the Spirit of God in heaven. Rather, it was simply that His perspective was different….’ God was incarnated as the Son of man, that is, God’s Spirit assumed the flesh and became the Son of man to appear to us and do His work. No matter how the Lord Jesus was expressing His voice or praying to God the Father, His substance was divinity, not humanity. Because the Lord Jesus still assumed the appearance of the flesh, He called the God in heaven Father from the position of a created being when praying, which showed the humbleness and obedience of the incarnate God. The reason why we are in such a puzzle is mainly because we don’t know the incarnate flesh of God nor understand this aspect of truth, but instead interpret the Lord’s word literally.”

Hearing this passage of words and her fellowship, I was suddenly enlightened: It turns out that the Lord Jesus is God’s Spirit realized in the flesh. The Lord is the appearance of Jehovah God on earth who created the heavens and earth and all things and created mankind, and also proclaimed the laws to mankind. It doesn’t mean that Jesus Christ is the Son of God. The Lord Jesus called God in heaven Father because He was in the position of a created being, which didn’t affect His divine substance. Therefore, the Lord Jesus saying, "he that has seen me has seen the Father" is not contradictory with His calling God in heaven Father. Then my heart was lightened and I decided to share the enlightenment with my daughter, in order that she could know Jesus Christ is God Himself and walk free from the confusions.

Read more on our Knowing Jesus page, or click on the related articles below. 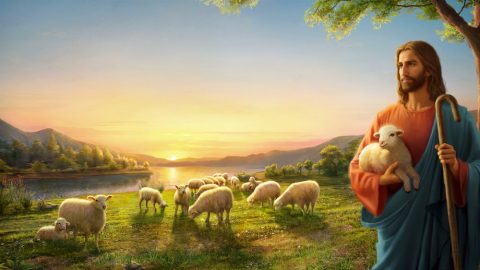 Why Is the Lord Jesus Called Christ?
Show more

God Is Almighty, but Why Did Jesus Redeem Us by Crucifixion?

Since accepting the Lord Jesus’ gospel, I often heard the pastor expound this verse to us: “For God so loved the world, that he gave his only begotten Son, that whoever believes in him should not perish, but have everlasting life” (John 3:16). The Lord Jesus was nailed to the cross, shed all His blood, […]

I am a pastor. I have preached and worked for the Lord for years, but a puzzle constantly remained in my heart: Why did the Lord Jesus come to work among man in the image of an ordinary person? Many people, just because of His ordinary appearance, denied that He is God Himself, and regarded […]

“Take heed and beware of the leaven of the Pharisees and of the Sadducees” (Matthew 16:6). In what context did the Lord Jesus speak these words? The Scriptures provide the following accounts, “The Pharisees also with the Sadducees came, and tempting desired him that he would show them a sign from heaven. He answered and […]

It’s recorded in Acts 1:3, “To whom also he showed himself alive after his passion by many infallible proofs, being seen of them forty days, and speaking of the things pertaining to the kingdom of God.” Whenever reading this verse, a bunch of pious Christians wonder why the Lord Jesus appeared to people for forty […]