And Adam knew Eve his wife; and she conceived, and bore Cain, and said, I have gotten a man from the LORD. And she again bore his brother Abel. And Abel was a keeper of sheep, but Cain was a tiller of the ground. And in process of time it came to pass, that Cain brought of the fruit of the ground an offering to the LORD. And Abel, he also brought of the firstborn of his flock and of the fat thereof. And the LORD had respect to Abel and to his offering: But to Cain and to his offering he had not respect. And Cain was very wroth, and his countenance fell. And the LORD said to Cain, Why are you wroth? and why is your countenance fallen? If you do well, shall you not be accepted? and if you do not well, sin lies at the door. And to you shall be his desire, and you shall rule over him. 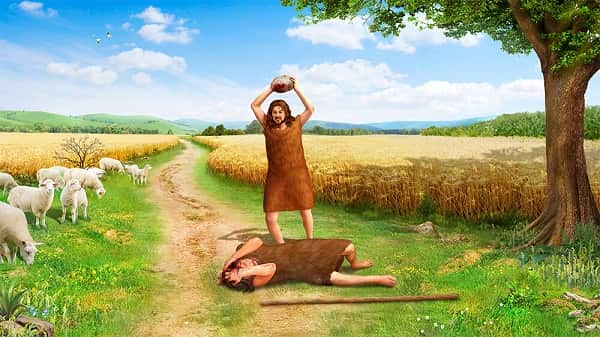 And the LORD said to Cain, Where is Abel your brother? And he said, I know not: Am I my brother's keeper? And he said, What have you done? the voice of your brother's blood cries to me from the ground. And now are you cursed from the earth, which has opened her mouth to receive your brother's blood from your hand; When you till the ground, it shall not from now on yield to you her strength; a fugitive and a vagabond shall you be in the earth. And Cain said to the LORD, My punishment is greater than I can bear. Behold, you have driven me out this day from the face of the earth; and from your face shall I be hid; and I shall be a fugitive and a vagabond in the earth; and it shall come to pass, that every one that finds me shall slay me. And the LORD said to him, Therefore whoever slays Cain, vengeance shall be taken on him sevenfold. And the LORD set a mark on Cain, lest any finding him should kill him.

And Cain went out from the presence of the LORD, and dwelled in the land of Nod, on the east of Eden.

Expulsion from the Garden of Eden - Bible Stories

The Flight to Egypt

The Flight to Egypt - Matthew 2 13 And when they were departed, behold, the angel of the Lord appears to Joseph in a dream, saying, Arise, and take the young child and his mother, and flee into Egypt, and be you there until I bring you word: for Herod will seek the young child to destroy […]

Job Loses his Children and Property (Job 1:13-22) 13 And there was a day when his sons and his daughters were eating and drinking wine in their oldest brother's house: 14 And there came a messenger to Job, and said, The oxen were plowing, and the asses feeding beside them: 15 And the Sabeans fell […]

Fearing God Alone – Matthew 10 26 Fear them not therefore: for there is nothing covered, that shall not be revealed; and hid, that shall not be known. 27 What I tell you in darkness, that speak you in light: and what you hear in the ear, that preach you on the housetops. 28 And fear not them which kill the […]

Joshua's Charge to Leaders And it came to pass a long time after that the LORD had given rest to Israel from all their enemies round about, that Joshua waxed old and stricken in age. And Joshua called for all Israel, and for their elders, and for their heads, and for their judges, and for […]