15 But when Jesus knew it, he withdrew himself from there: and great multitudes followed him, and he healed them all; 16 And charged them that they should not make him known: 17 That it might be fulfilled which was spoken by Esaias the prophet, saying,

18 Behold my servant, whom I have chosen; my beloved, in whom my soul is well pleased: I will put my spirit on him, and he shall show judgment to the Gentiles.

19 He shall not strive, nor cry; neither shall any man hear his voice in the streets.

20 A bruised reed shall he not break, and smoking flax shall he not quench, till he send forth judgment to victory.

21 And in his name shall the Gentiles trust.

22 Then was brought to him one possessed with a devil, blind, and dumb: and he healed him, so that the blind and dumb both spoke and saw. 23 And all the people were amazed, and said, Is not this the son of David? 24 But when the Pharisees heard it, they said, This fellow does not cast out devils, but by Beelzebub the prince of the devils. 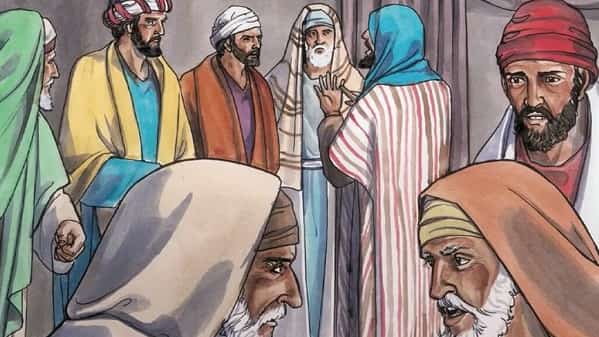 25 And Jesus knew their thoughts, and said to them, Every kingdom divided against itself is brought to desolation; and every city or house divided against itself shall not stand: 26 And if Satan cast out Satan, he is divided against himself; how shall then his kingdom stand? 27 And if I by Beelzebub cast out devils, by whom do your children cast them out? therefore they shall be your judges. 28 But if I cast out devils by the Spirit of God, then the kingdom of God is come to you. 29 Or else how can one enter into a strong man's house, and spoil his goods, except he first bind the strong man? and then he will spoil his house.

The Jesus' life story from Matthew 11:1-19 including John's Inquiry and Jesus testifies about John.