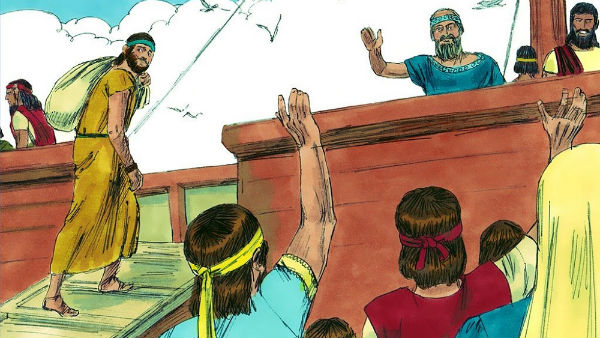 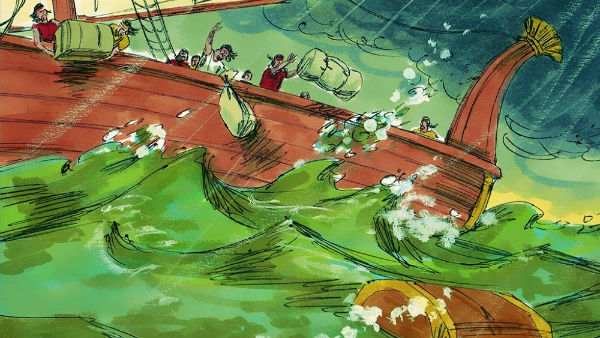 4 But the LORD sent out a great wind into the sea, and there was a mighty tempest in the sea, so that the ship was like to be broken. 5 Then the mariners were afraid, and cried every man to his god, and cast forth the wares that were in the ship into the sea, to lighten it of them. But Jonah was gone down into the sides of the ship; and he lay, and was fast asleep. 6 So the shipmaster came to him, and said to him, What mean you, O sleeper? arise, call on your God, if so be that God will think on us, that we perish not.

7 And they said every one to his fellow, Come, and let us cast lots, that we may know for whose cause this evil is on us. So they cast lots, and the lot fell on Jonah. 8 Then said they to him, Tell us, we pray you, for whose cause this evil is on us; What is your occupation? and from where come you? what is your country? and of what people are you? 9 And he said to them, I am an Hebrew; and I fear the LORD, the God of heaven, which has made the sea and the dry land.

10 Then were the men exceedingly afraid, and said to him. Why have you done this? For the men knew that he fled from the presence of the LORD, because he had told them.

Tags: The Story of Jonah
Next

The content of the Book of Jonah 3:1-4: Jehovah God once more asks Jonah to go to Nineveh. Jonah arrives there and preaches to the Ninevites that God will destroy them after 40 days.

The content of the Book of Jonah 4:1-11: Because God doesn’t send down disasters to destroy the city of Nineveh, Jonah is dissatisfied and very angry with God. Through a gourd vine, Jehovah God lets Jonah know His compassion for mankind.

The content of the Book of Jonah 3:5-10: After hearing Jehovah God’s warning, the Ninevites immediately repent to God and finally win God’s mercy.

The content of the Book of Jonah 1:11-17, 2:1-10: Jonah was cast into the sea. Jehovah God prepared a great fish to swallow up Jonah. And Jonah was in the belly of the fish three days and three nights.