And the LORD said to Noah, Come you and all your house into the ark; for you have I seen righteous before me in this generation. Of every clean beast you shall take to you by sevens, the male and his female: and of beasts that are not clean by two, the male and his female. Of fowls also of the air by sevens, the male and the female; to keep seed alive on the face of all the earth. For yet seven days, and I will cause it to rain on the earth forty days and forty nights; and every living substance that I have made will I destroy from off the face of the earth. And Noah did according to all that the LORD commanded him. 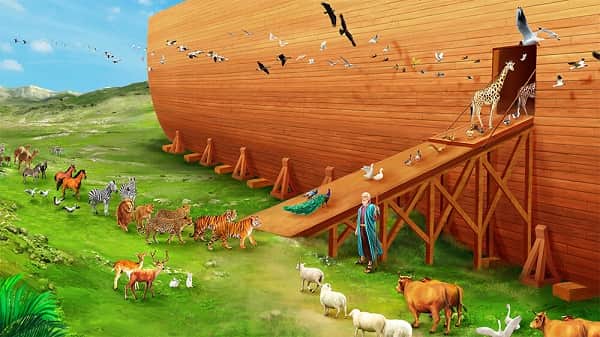 And Noah was six hundred years old when the flood of waters was on the earth. And Noah went in, and his sons, and his wife, and his sons' wives with him, into the ark, because of the waters of the flood. Of clean beasts, and of beasts that are not clean, and of fowls, and of every thing that creeps on the earth, There went in two and two to Noah into the ark, the male and the female, as God had commanded Noah. And it came to pass after seven days, that the waters of the flood were on the earth. In the six hundredth year of Noah's life, in the second month, the seventeenth day of the month, the same day were all the fountains of the great deep broken up, and the windows of heaven were opened. And the rain was on the earth forty days and forty nights.

Jonah Sent to Nineveh, Flees to Tarshish (Jonah 1:1-3) 1 Now the word of the LORD came to Jonah the son of Amittai, saying, 2 Arise, go to Nineveh, that great city, and cry against it; for their wickedness is come up before me. 3 But Jonah rose up to flee to Tarshish from the […]

Abram Named Abraham - Genesis 17 1 And when Abram was ninety years old and nine, the LORD appeared to Abram, and said to him, I am the Almighty God; walk before me, and be you perfect. 2 And I will make my covenant between me and you, and will multiply you exceedingly. 3 And Abram fell on his […]