One summer evening, the weather was sweltering. People sat at the benches in the park to enjoy the cool air under the trees. Lisa was strolling in the park alone, she raised her head and looked up at the sky for a while, and then looked down to think, with a face full of worry.

Suddenly, she found two people standing in front of her, so she stopped. With her head raising slowly, she saw clearly that it was Leader Mu and Sister Yuan of the church who were greeting her. Lisa immediately got a little flurried and her heart started thumping, because last time she promised Leader Mu to attend the co-worker training meeting, but actually she was too busy with her work to show up. She had been absent from their co-worker meetings recently due to being occupied by other affairs. She was surprised to meet them there that night.

In order to conceal her nervousness, Lisa hurried to say, “Oh, it’s so stifling that I came out.”

Leader Mu said concernedly, “Thank the Lord! Though we didn’t see you in meetings, yet we meet you here today. It is really the Lord’s preparation. Lisa, have you been very busy with your family life recently? Previously you were the most passionate and active one in our church!”

Before Lisa reacted, Sister Yuan said immediately, “Sister, we are supposed to attend meetings more. It is said in the Bible, ‘And at midnight there was a cry made, Behold, the bridegroom comes; go you out to meet him’ (Matthew 25:6). Without watching and waiting, don’t you fear that the Lord will desert you when He returns suddenly at midnight to bring us into the kingdom of heaven?”

Hearing her words, Lisa was weaker in her heart and thought, “These years, the pastors have often said that the Lord will come at midnight, and let us pray watchfully at every moment, sleep fully dressed at night, and not sleep too soundly. I have been doing according to his words. However, not only have I not welcomed the Lord but I grow ever more distant from Him and my spirit is darker and darker. Sometimes I got up to pray at midnight and then dozed off unknowingly. And when I woke up it was already light. So I’m afraid that if I continue like this, I will be abandoned and eliminated if the Lord returns at midnight.”

Lisa sighed and said with a sense of loss, “Actually, I have been obeying the Lord’s teachings these years, getting up to pray watchfully at midnight every night . Nevertheless, now I am hazy about whether doing like this is the Lord’s will or not. If it is His will, why is it that I am getting further and further away from the Lord, with no peace and safety in my heart and spirit and even unable to sense the Lord’s presence in my prayers?” 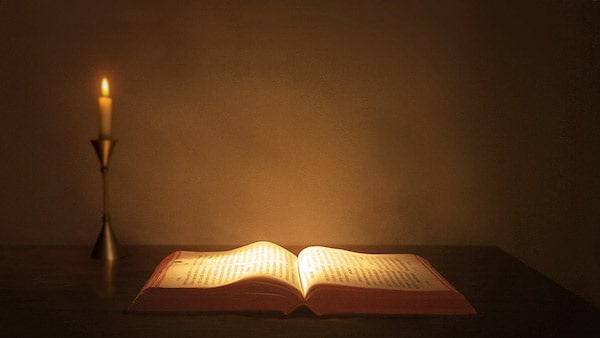 Hearing her words, Leader Mu gave a bitter smile and said, “Before, we all understood the Lord’s prophecy ‘And at midnight there was a cry made, Behold, the bridegroom comes; go you out to meet him’ to mean that as long as we kept awake and prayed watchfully at midnight, we would meet the Lord when He came at midnight, but in fact, I found that there is mystery in the prophecy through seeking fellowship with the sisters from other denominations recently.”

Lisa found it refreshing to hear that, and she said, “Is there a mystery!” At this moment, Sister Yuan hastily said, “What mystery is there? The Lord Jesus’ words are so clear. He will return at midnight, those who pray watchfully will be raptured, while those who are falling asleep will be deserted. How could this possibly be wrong?”

Leader Mu said, “Let’s sit on the bench and talk.”

After sitting on the bench, Leader Mu continued, “Thank the Lord! Before, my understanding of this verse was the same as yours. I thought that the ‘midnight’ the Lord Jesus said referred to the depth of night. I followed what I understood, and even more taught the brothers and sisters to obey it. Afterward, I found this seemed not to be after the Lord’s will, but I couldn’t explain properly what the true meaning of this verse is. Worrying about misleading the brothers and sisters, I searched everywhere for spiritual books to read, prayed to the Lord frequently, and pondered what the ‘midnight’ the Lord said there refers to.

I didn’t understand that it refers to the darkest and evilest period until a sister communicated with me. Isn’t that the situation now? The whole world being dark and evil, we human beings all stray from God, do not worship God, lose blessings from God, and live completely under Satan’s influence of darkness. Countries go to war against each other, flames of war raging across the land, people fight each other fiercely and kill one another, the entire world is full of fights, bloodiness, and slaughter, all of mankind is living in darkness and pain. Every person cries that society is dark and man’s hearts are wicked. Even the religious circles are no exception: Coworkers attack, judge, and reject each other, turning the lecterns into their combat arenas and making the churches become society and full of jealousy and strife. Additionally, there is no love among preachers and believers, much less forbearance and patience. Attracted by evil trends of the world, many believers in our church tire themselves out chasing after money, fame, fortune, position, and material enjoyments, living helplessly in sin. As 2 Timothy 3:1-4 says, ‘This know also, that in the last days perilous times shall come. For men shall be lovers of their own selves, covetous, boasters, proud, blasphemers, disobedient to parents, unthankful, unholy, Without natural affection, truce breakers, false accusers, incontinent, fierce, despisers of those that are good, Traitors, heady, high minded, lovers of pleasures more than lovers of God.’ Thus it can be seen that these are exactly the signs of the Lord having already returned.”

At that moment, Lisa’s heart was enlightened after hearing Leader Mu’s words. She understood the ‘midnight’ the Lord said refers to the time when the whole world is at its darkest and evilest. She thought: “now, the unbelievers all cry that the society is extremely dark and man’s hearts are filled with sinisterness, and the whole religious world has fallen into dark desolation. By comparing these facts with the prophecies of the Lord’s return, it can be seen that the prophecies have been fulfilled indeed! Since the Lord once reminded us that someone will yell ‘the bridegroom comes’ at midnight, then there will definitely be people who preach the gospel to us. ”

Lisa finally stopped frowning. As soon as she got home from the park, she knelt before the Lord and prayed, asking Him to guide her to hear His voice early.

Will the Lord Jesus Come as a Thief or Come Upon a Cloud?

What Does “Great Glory” in Bible Prophecy Really Refer to?

What do the 144,000 overcomers stated in the Bible prophecy refer to? Shall we be overcomers as long as we keep the Lord’s name and work hard for Him?

If we handle Bible prophecy according to its literal meaning, we’ll easily miss the Lord’s return. Read this article to find out how to approach the Bible prophecy correctly.

What does the descending of the Son of man in the Bible refer to? In which way will the Lord descend when He comes again?

The Signs of the second coming of Jesus Christ have appeared. What does this tell us? Read this article to learn more.