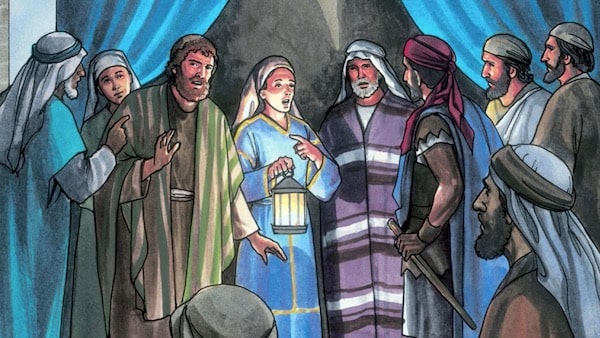 69 Now Peter sat without in the palace: and a damsel came to him, saying, You also were with Jesus of Galilee. 70 But he denied before them all, saying, I know not what you say. 71 And when he was gone out into the porch, another maid saw him, and said to them that were there, This fellow was also with Jesus of Nazareth. 72 And again he denied with an oath, I do not know the man. 73 And after a while came to him they that stood by, and said to Peter, Surely you also are one of them; for your speech denudes you. 74 Then began he to curse and to swear, saying, I know not the man. And immediately the cock crew. 75 And Peter remembered the word of Jesus, which said to him, Before the cock crow, you shall deny me thrice. And he went out, and wept bitterly.

1. Peter denied the Lord three times, but why did the Lord Jesus only give the keys of the kingdom of heaven to Peter?

Read to get the answer: Why Did Jesus Christ Only Give Peter the Keys of the Kingdom of Heaven?

The Jesus' life story about the cost of following Jesus and Jesus calls Matthew.

The content of the Bible story of Judas Hangs Himself: Then Judas, which had betrayed him, when he saw that he was condemned, repented himself, and brought again the thirty pieces of silver to the chief priests and elders.

It is recorded in the Bible story of Jesus Is Condemned Before Pilate that the Israelites were incited to choose to release Barabbas and that the Lord Jesus was crucified.

The miracles of Jesus. He Heals at Peter's House, Demons Cast into Pigs, The Healing Touch of Jesus, Jesus Heals a Paralytic, Two Blind Men and a Mute Man.