Now it came to pass, when Adonizedec king of Jerusalem had heard how Joshua had taken Ai, and had utterly destroyed it; as he had done to Jericho and her king, so he had done to Ai and her king; and how the inhabitants of Gibeon had made peace with Israel, and were among them; That they feared greatly, because Gibeon was a great city, as one of the royal cities, and because it was greater than Ai, and all the men thereof were mighty. Why Adonizedec king of Jerusalem, sent to Hoham king of Hebron, and to Piram king of Jarmuth, and to Japhia king of Lachish, and to Debir king of Eglon, saying, Come up to me, and help me, that we may smite Gibeon: for it has made peace with Joshua and with the children of Israel. Therefore the five kings of the Amorites, the king of Jerusalem, the king of Hebron, the king of Jarmuth, the king of Lachish, the king of Eglon, gathered themselves together, and went up, they and all their hosts, and encamped before Gibeon, and made war against it.

And the men of Gibeon sent to Joshua to the camp to Gilgal, saying, Slack not your hand from your servants; come up to us quickly, and save us, and help us: for all the kings of the Amorites that dwell in the mountains are gathered together against us. So Joshua ascended from Gilgal, he, and all the people of war with him, and all the mighty men of valor. And the LORD said to Joshua, Fear them not: for I have delivered them into your hand; there shall not a man of them stand before you. Joshua therefore came to them suddenly, and went up from Gilgal all night. And the LORD discomfited them before Israel, and slew them with a great slaughter at Gibeon, and chased them along the way that goes up to Bethhoron, and smote them to Azekah, and to Makkedah. And it came to pass, as they fled from before Israel, and were in the going down to Bethhoron, that the LORD cast down great stones from heaven on them to Azekah, and they died: they were more which died with hailstones than they whom the children of Israel slew with the sword. (Joshua 10:1-11)

Then spoke Joshua to the LORD in the day when the LORD delivered up the Amorites before the children of Israel, and he said in the sight of Israel, Sun, stand you still on Gibeon; and you, Moon, in the valley of Ajalon. 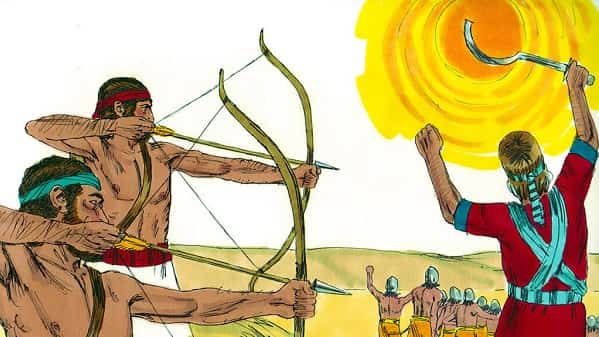 And the sun stood still, and the moon stayed, until the people had avenged themselves on their enemies. Is not this written in the book of Jasher? So the sun stood still in the middle of heaven, and hurried not to go down about a whole day.

And there was no day like that before it or after it, that the LORD listened to the voice of a man: for the LORD fought for Israel.

Joshua made war a long time with all those kings. There was not a city that made peace with the children of Israel, save the Hivites the inhabitants of Gibeon: all other they took in battle. For it was of the LORD to harden their hearts, that they should come against Israel in battle, that he might destroy them utterly, and that they might have no favor, but that he might destroy them, as the LORD commanded Moses.

And at that time came Joshua, and cut off the Anakims from the mountains, from Hebron, from Debir, from Anab, and from all the mountains of Judah, and from all the mountains of Israel: Joshua destroyed them utterly with their cities. There was none of the Anakims left in the land of the children of Israel: only in Gaza, in Gath, and in Ashdod, there remained. So Joshua took the whole land, according to all that the LORD said to Moses; and Joshua gave it for an inheritance to Israel according to their divisions by their tribes. And the land rested from war. (Joshua 11:18-23)

The Joshua Bible story about Joshua's charge to leaders and Joshua's death and burial.

Joshua Bible story about God commissions Joshua and Joshua takes charge. After the death of Moses, the Lord spoke to Joshua the son of Nun, Moses' minister.