And it came to pass a long time after that the LORD had given rest to Israel from all their enemies round about, that Joshua waxed old and stricken in age. And Joshua called for all Israel, and for their elders, and for their heads, and for their judges, and for their officers, and said to them, I am old and stricken in age: And you have seen all that the LORD your God has done to all these nations because of you; for the LORD your God is he that has fought for you. Behold, I have divided to you by lot these nations that remain, to be an inheritance for your tribes, from Jordan, with all the nations that I have cut off, even to the great sea westward. And the LORD your God, he shall expel them from before you, and drive them from out of your sight; and you shall possess their land, as the LORD your God has promised to you. Be you therefore very courageous to keep and to do all that is written in the book of the law of Moses, that you turn not aside therefrom to the right hand or to the left; That you come not among these nations, these that remain among you; neither make mention of the name of their gods, nor cause to swear by them, neither serve them, nor bow yourselves to them: But hold to the LORD your God, as you have done to this day. For the LORD has driven out from before you great nations and strong: but as for you, no man has been able to stand before you to this day. One man of you shall chase a thousand: for the LORD your God, he it is that fights for you, as he has promised you. Take good heed therefore to yourselves, that you love the LORD your God. Else if you do in any wise go back, and join to the remnant of these nations, even these that remain among you, and shall make marriages with them, and go in to them, and they to you: Know for a certainty that the LORD your God will no more drive out any of these nations from before you; but they shall be snares and traps to you, and scourges in your sides, and thorns in your eyes, until you perish from off this good land which the LORD your God has given you. 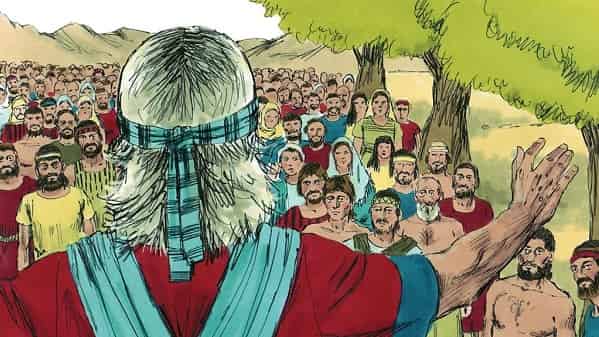 And, behold, this day I am going the way of all the earth: and you know in all your hearts and in all your souls, that not one thing has failed of all the good things which the LORD your God spoke concerning you; all are come to pass to you, and not one thing has failed thereof. Therefore it shall come to pass, that as all good things are come on you, which the LORD your God promised you; so shall the LORD bring on you all evil things, until he have destroyed you from off this good land which the LORD your God has given you. When you have transgressed the covenant of the LORD your God, which he commanded you, and have gone and served other gods, and bowed yourselves to them; then shall the anger of the LORD be kindled against you, and you shall perish quickly from off the good land which he has given to you. (Joshua 23: 1-16)

And the people answered and said, God forbid that we should forsake the LORD, to serve other gods; For the LORD our God, he it is that brought us up and our fathers out of the land of Egypt, from the house of bondage, and which did those great signs in our sight, and preserved us in all the way wherein we went, and among all the people through whom we passed: And the LORD drove out from before us all the people, even the Amorites which dwelled in the land: therefore will we also serve the LORD; for he is our God.

And Joshua said to the people, You cannot serve the LORD: for he is an holy God; he is a jealous God; he will not forgive your transgressions nor your sins. If you forsake the LORD, and serve strange gods, then he will turn and do you hurt, and consume you, after that he has done you good. And the people said to Joshua, No; but we will serve the LORD. (Joshua 24: 16-21)

And it came to pass after these things, that Joshua the son of Nun, the servant of the LORD, died, being an hundred and ten years old. And they buried him in the border of his inheritance in Timnathserah, which is in mount Ephraim, on the north side of the hill of Gaash. 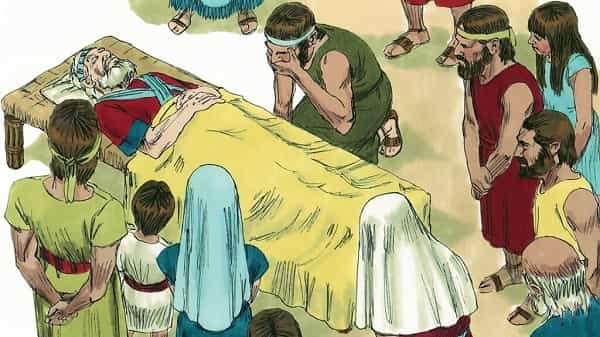 And the bones of Joseph, which the children of Israel brought up out of Egypt, buried they in Shechem, in a parcel of ground which Jacob bought of the sons of Hamor the father of Shechem for an hundred pieces of silver: and it became the inheritance of the children of Joseph. And Eleazar the son of Aaron died; and they buried him in a hill that pertained to Phinehas his son, which was given him in mount Ephraim. (Joshua 24: 29-33)

Joshua Bible story about God commissions Joshua and Joshua takes charge. After the death of Moses, the Lord spoke to Joshua the son of Nun, Moses' minister.