19 And the people came up out of Jordan on the tenth day of the first month, and encamped in Gilgal, in the east border of Jericho. 20 And those twelve stones, which they took out of Jordan, did Joshua pitch in Gilgal. 21 And he spoke to the children of Israel, saying, When your children shall ask their fathers in time to come, saying, What mean these stones? 22 Then you shall let your children know, saying, Israel came over this Jordan on dry land. 23 For the LORD your God dried up the waters of Jordan from before you, until you were passed over, as the LORD your God did to the Red sea, which he dried up from before us, until we were gone over: 24 That all the people of the earth might know the hand of the LORD, that it is mighty: that you might fear the LORD your God for ever. (Joshua 4 ) 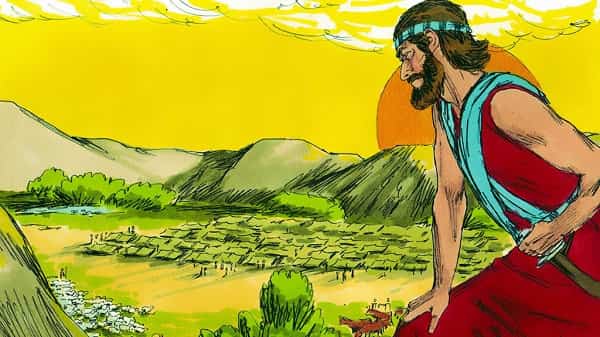 1 And it came to pass, when all the kings of the Amorites, which were on the side of Jordan westward, and all the kings of the Canaanites, which were by the sea, heard that the LORD had dried up the waters of Jordan from before the children of Israel, until we were passed over, that their heart melted, neither was there spirit in them any more, because of the children of Israel. (Joshua 5)

The Passover at Gilgal

10 And the children of Israel encamped in Gilgal, and kept the passover on the fourteenth day of the month at even in the plains of Jericho. 11 And they did eat of the old corn of the land on the morrow after the passover, unleavened cakes, and parched corn in the selfsame day. 12 And the manna ceased on the morrow after they had eaten of the old corn of the land; neither had the children of Israel manna any more; but they did eat of the fruit of the land of Canaan that year.

13 And it came to pass, when Joshua was by Jericho, that he lifted up his eyes and looked, and, behold, there stood a man over against him with his sword drawn in his hand: and Joshua went to him, and said to him, Are you for us, or for our adversaries? 14 And he said, No; but as captain of the host of the LORD am I now come. And Joshua fell on his face to the earth, and did worship, and said to him, What said my Lord to his servant?15 And the captain of the LORD's host said to Joshua, Loose your shoe from off your foot; for the place where on you stand is holy. And Joshua did so. (Joshua 5)

The Walls of Jericho

The Joshua Bible story about five kings war against Gibeon and the sun stands still.

Joshua Bible story about Israel Defeated at Ai and The Sin of Achan, But the children of Israel committed a trespass in the accursed thing...

Joshua Bible Story about the deceit of the Gibeonites, when all the kings That they gathered themselves together, to fight with Joshua and with Israel...