I do set my bow in the cloud, and it shall be for a token of a covenant between me and the earth.

Whenever I see the rainbow in the sky, I’ll think of the story of the great flood and Noah’s ark. After the flood destroyed the earth, God made the covenant with humans that He would never do this again.

About the rainbow covenant, many of us only know people’s iniquity of that time had reached its peak and they were detested by God, so God destroyed the world using floods. However, what’s the true meaning of God’s setting the rainbow in the cloud? I saw a passage in a spiritual book: “Originally, God created a humanity that in His eyes was very good and close to Him, but they were destroyed by flood after rebelling against Him. Did it hurt God that such a humanity just instantly vanished like that? Of course it hurt! So what was His expression of this pain? How was it recorded in the Bible? It was recorded in the Bible as: ‘And I will establish my covenant with you, neither shall all flesh be cut off any more by the waters of a flood; neither shall there any more be a flood to destroy the earth.’ This simple sentence reveals God’s thoughts. This destruction of the world pained Him very much. In man’s words, He was very sad. … In this covenant we see God’s heart—we see that God’s heart was in pain when He destroyed this humanity. In the language of man, when God destroyed mankind and saw mankind disappearing, His heart was weeping and bleeding.”

When God destroyed the mankind He created with His own hands, His heart was hurting. However, no one is able to realize or comprehend God’s mood at that time. Hidden within the rainbow covenant are God’s sorrow and reluctance to give mankind up. After understanding this, we will think of God’s love and concern for mankind, and His sorrow for the fall of mankind when we see the rainbow.

In present-day society, we live a life only concerned with the pursuit of pleasure and enjoyment; public morals are degenerating with each passing day; our interactions with each other become more and more difficult; we stray farther and farther from God; we are more corrupt than people of Noah’s time. Have we ever thought that God is sorrowing over us? God hopes we can awaken, turn away from our evil ways, and repent and confess before Him. Only in this way can we have the chance to be saved.

After knowing God’s love behind the rainbow, are you willing to return before God, and no longer drift in the world? 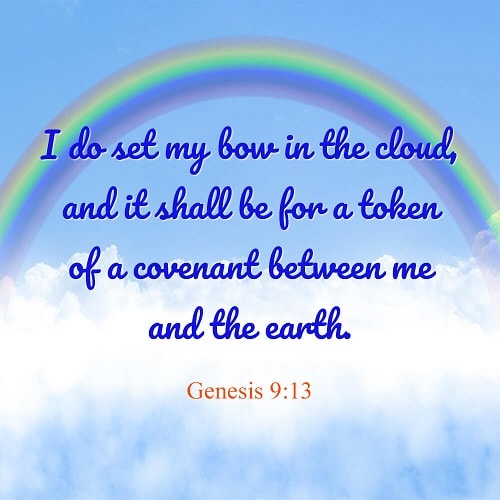 The Love of Many Shall Wax Cold. A Commentary on Matthew 24:12

The Tabernacle of God Is With Men. A Commentary on Revelation 21:3

Read today’s Bible Verse of the Day. This commentary on Revelation 21:3 will tell you where God’s kingdom is and point out the correct way to enter God’s kingdom.

The Meaning of Luke 17:24—The Coming of the Son of Man in the Last Days

Read today’s Bible Verse of the Day. This commentary on Luke 17:24 will lead you to learn why the coming of the Son of man is like the lightning.

Read today’s Bible Verse of the Day. This commentary on Revelation 22:20 will tell you how to be a wise virgin who can hear God’s voice and welcome the Lord’s return.

And the publican, standing afar off, would not lift up so much as his eyes to heaven, but smote on his breast, saying, God be merciful to me a sinner. I tell you, this man went down to his house justified rather than the other: for every one that exalts himself shall be abased; and he that humbles himself shall be exalted. (Luke 18:13–14)