There is a short story in “Lüshi Chunqiu· Studying the Present”: A man from Chu State was crossing a river by boat. However, when the boat moved into midstream, his sword suddenly fell into the water. He took out a small knife and cut a mark on the boat where his sword had fallen overboard. As the boat was pulled in to shore, he jumped into the river to retrieve his sword from where he had made the mark. However, he found nothing.

The story really gives us food for thought, although short. How fool the man is! Didn’t he know that the boat was going forward? Why didn’t he search his sword from where it dropped? As a matter of fact, everything is constantly changing and moving forward, and only if man keeps pace with it, will he get what he wants. If man constrains it to a certain scope, he may easily become a conformist and make mistakes like the man in this story, and end up with a failure.

That reminds me of the earliest Pharisees who resisted and rejected the Lord Jesus. At that time, they expounded on the laws and commandments all day long. Though they longed desperately for the arrival of Messiah, they still clung to the Old Testament, thinking according to their imagination that Messiah should act in line with the Bible when He came. Anyone without basis in the biblical prophecies is not Messiah and can’t be believed. Therefore, when the Lord Jesus came to do His work, those scribes and Pharisees considered that the preaching given by the Lord Jesus was at odds with the Bible, so they neither listened nor believed in. Though the Lord Jesus said, “But I say to you, That in this place is one greater than the temple” (Matthew 12:6), to admonish people under the law to come out of the temple and keep pace with God’s new work, yet many people headed by the Pharisees still refused to accept, because His words weren’t in accordance with the Bible. They even rejected, condemned and blasphemed Him when He healed the sick and cast out demons and performed lots of miracles during His work. In particular, they saw what the Lord Jesus did were mostly incompatible with the Old Testament, for example: The Old Testament required believers to serve God in the temple, while the Lord Jesus came out of the temple and led His disciples to preach at the seaside, on the mountains, in the wilderness and in the villages; the Old Testament required believers to keep the Sabbath, but the Lord Jesus healed the ill, preached and did the work on the Sabbath; in addition, His requirements like washing feet, covering head, breaking bread, and drinking wine were beyond Old Testament. … Then the Pharisees condemned the Lord Jesus under the excuse that His work had transcended the Old Testament. They nailed the returned Messiah—the Lord Jesus to the cross ultimately, and committed a heinous crime. Thus, it can be seen that they all made the same mistake just like the man in the story. In the end, they were loathed by God and condemned throughout the ages.

The bitter lessons of the Pharisees’ failure should be born in mind by Christians. Two thousand years ago, the Lord Jesus ever prophesied that He would return in the last days. It’s already the last days now. Brothers and sisters in the Lord are eagerly longing for the return of the Lord Jesus; however some of them also cling to the Bible, believing that the return of the Lord Jesus must be in accordance with the Bible. If beyond the Bible, He will be false. Isn’t this viewpoint the same as the earliest Pharisees? What can they gain by keeping to the Bible? Can they welcome the return of the Lord? I feel confused, so I often pray to Him for this and ask for His guidance. One day, I saw such two paragraphs of words shared by brothers and sisters on Facebook: “History is always moving forward, and the work of God is always moving forward. For His six-thousand-year management plan to reach its end, it must keep progressing onward. Each day He must do new work, each year He must do new work; He must open up new paths, must begin new eras, begin new and greater work, and bring new names and new work. The Spirit of God is always doing new work, and never clings to the old ways and regulations. His work also never ceases, and is happening all the time” (“The Vision of God’s Work (3)”). “Not ever does the work of God conform to the conceptions of man, for His work is always new and never old. Not ever does He repeat work of old but rather forges ahead with work never before done. As God does not repeat His work and man invariably judges the work of God today based on His work of the past, it is exceedingly difficult for God to carry out each stage of work of the new age. Man presents far too many hindrances! The thinking of man is too hidebound! No man knows the work of God, yet they all define such work” (“How Can Man Who Has Defined God in His Conceptions Receive the Revelations of God?”). It was absolutely right that “History is always moving forward, and the work of God is always moving forward.” We are hidebound if we are always clinging to the old work the Lord Jesus did, aren’t we? Don’t we make the same mistake like the man in the story “Cutting A Mark on the Boat to Find the Sword”? From this passage, we know that God’s work is always new and never old. He never repeats His work, which can be proved by the work that the Lord Jesus did at that time. The Lord Jesus wasn’t restricted by the biblical prophecy at all when doing His work, for what God does accords with man’s need and is most beneficial to us mankind. It is extremely easy for us to walk on the path of failure of the earliest Pharisees if we define the work of God. This is no small matter!

What Does the Bible Say About Itself?

Is the Bible All God-breathed?

How Should We Welcome the Lord When He Knocks on the Door?

Flourish in Hard Times - Lessons From a Story of Bamboo Shoots

To Be a Useful Vessel of God, We Must Suffer

Going to Heaven or Hell Sometimes Hinges on the Decision Made in a Moment
By Zhao Yang Once there was a warrior who asked an old man about the difference between heaven and hell. The old man didn’t answer him directly, but … 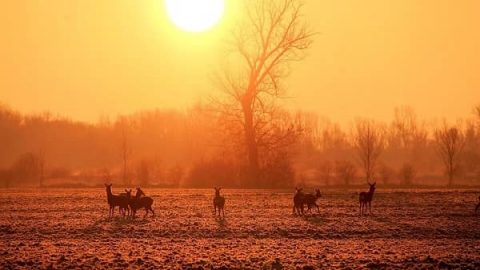