The Meaning of Luke 6:45—How to Tell the Difference Between Good and Evil

This verse points out some principles of discerning good from evil. We can discern whether a person is good or wicked from the intentions and motivations of his words and persistent performance because what he says and does is actually what he thinks. A good man has good will, conscience, and sense. If he who pursues the truth does something that goes against human morality or does something evil, he will feel guilty and accused, and people around him can see that he feels guilty and repentant. However, a wicked person only has evil thoughts in his mind. No matter how great evil a wicked person commits, they think that it’s a skill, an ability. They think it proves that their methods are superior, that they’ve achieved their goal, and that they’re better than others. That’s why they don’t have remorse, and worse still, don’t loathe themselves. They’re even pleased with themselves, think that they are more capable than others, and look down on others. Such people are wicked people. When they do evil, wicked people don’t have remorse or have a guilty conscience. They just like evil. They think that’s the way humans ought to be, that such behavior is normal. So people can’t see their repentance and changes. Just as God says, “People who genuinely believe in God are those who are willing to put God’s word into practice and are willing to practice the truth. People who can genuinely stand witness for God are also those who are willing to put His word into practice and can genuinely stand on the side of the truth. People who resort to trickery and injustice all lack the truth, and they all bring shame to God. Those who engage in disputes in the church are Satan’s lackeys, and are the embodiment of Satan. Such people are so malicious. Those who have no discernment and are incapable of standing on the side of the truth all harbor evil intentions and tarnish the truth. These people are even more quintessential representatives of Satan; they are beyond redemption, and are of course objects for elimination” (“A Warning to Those Who Do Not Practice the Truth”).

When we can distinguish between a good person and a wicked person, we should treat different people with corresponding principles. If good people who pursue truth have committed a transgression or exhibited any corruption, we should assist them with love and must not suppress, exclude, or define them as hopeless ones, even though they have prejudices or make some judgment about us. As for wicked people, after we have distinguished them, we must abandon them, draw a line between us and them, and not follow them in doing evil. As believers in God, what path we walk, what kind of people we follow, who we really obey, and whom we stand with—all of these are matters of principles. Only by entering the truth and learning how to discern all kinds of people can we shun evil. 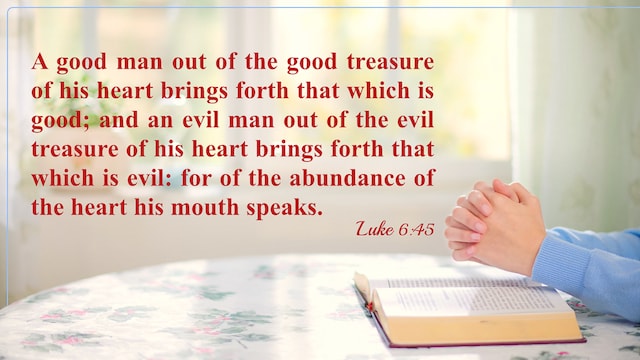 The Meaning of Luke 17:24—The Coming of the Son of Man in the Last Days

Read today’s Bible Verse of the Day. This commentary on Luke 17:24 will lead you to learn why the coming of the Son of man is like the lightning.

And the publican, standing afar off, would not lift up so much as his eyes to heaven, but smote on his breast, saying, God be merciful to me a sinner. I tell you, this man went down to his house justified rather than the other: for every one that exalts himself shall be abased; and he that humbles himself shall be exalted. (Luke 18:13–14)

The Tabernacle of God Is With Men. A Commentary on Revelation 21:3

Read today’s Bible Verse of the Day. This commentary on Revelation 21:3 will tell you where God’s kingdom is and point out the correct way to enter God’s kingdom.