For if you forgive men their trespasses, your heavenly Father will also forgive you:

Many times, we can hardly forgive others when they harm our interests. A passage said, “Before he was corrupted by Satan, man naturally followed God and obeyed His words. He was naturally of sound sense and conscience, and of normal humanity. After being corrupted by Satan, his original sense, conscience, and humanity grew dull and were impaired by Satan. Thus, he has lost his obedience and love toward God.” In fact, everyone of us is corrupted by Satan and has lost normal humanity, so we easily have conflicts with others. After knowing this, we can treat others’ transgressions correctly without prejudice and forgive them.

Next, love is inseparable from forgiveness. The Bible recorded, “Then came Peter to him, and said, Lord, how oft shall my brother sin against me, and I forgive him? till seven times? Jesus said to him, I say not to you, Until seven times: but, Until seventy times seven” (Mat 18:21-22). Since forgiveness is the Lord’s requirement of us, we should learn to put aside the hatred. I saw a passage in a spiritual book, “What kind of idea is this ‘seventy times seven’? It is to get people to make forgiveness their own responsibility, something they must learn, and a way they must keep. Even though this was just an expression, it served as a crucial point. It helped people deeply appreciate what He meant and find the proper ways of practice and the principles and standards in practice. This expression helped people understand clearly and gave them an accurate concept that they should learn forgiveness—to forgive without conditions and without limitations, but with an attitude of tolerance and understanding for others.” When we forgive others with tolerance, our pain and hatred will become less, and our life will get easy and happy. 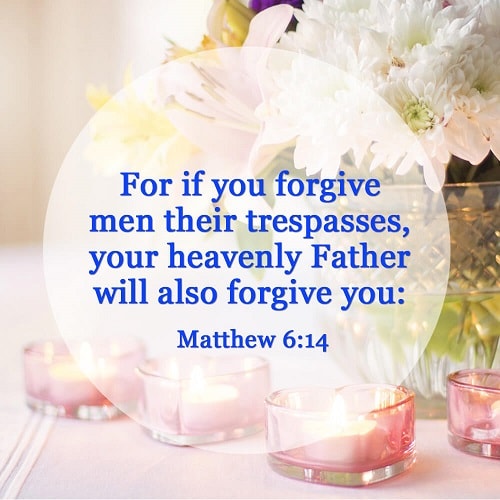 You Shall not Tempt the LORD - Deuteronomy 6:16

Respect of Persons Is Sin. A Commentary on James 2:9

Today’s Verse But if you have respect to persons, you commit sin, and are convinced of the law as transgressors. - James 2:9 Thoughts on Today's Verse... After reading this verse, I have deep feelings. We always judge people by their appearances and are unable to treat people correctly without realizing that this is a […]

The Words Expressed by the Incarnate God Is the True Light. A Commentary on John 1:9

Today’s Verse That was the true Light, which lights every man that comes into the world. - John 1:9 Thoughts on Today's Bible Verse: In this age of evil and darkness, mankind is living in Satan’s domain and is corrupt to the extreme. Man is controlled by satanic nature to act in spite of himself […]

Today’s Verse And said, Naked came I out of my mother's womb, and naked shall I return thither: the LORD gave, and the LORD has taken away; blessed be the name of the LORD. - Job 1:21 Thoughts on Today's Bible Verse: This is true testimony to Job’s victory over Satan when he lost all […]

Jesus Christ is the Way the Truth and the Life - John 14:6

Today’s Verse Jesus said to him, I am the way, the truth, and the life: no man comes to the Father, but by me. - John 14:6 Thoughts on Today's Verse: We know the Lord Jesus is the Christ in the flesh, and He is the God in heaven who comes down to the earth. […]