The Bible says, “At that time Jesus went on the sabbath day through the corn; and his disciples were an hungered, and began to pluck the ears of corn and to eat. But when the Pharisees saw it, they said to him, Behold, your disciples do that which is not lawful to do on the sabbath day. But he said to them, ‘But I say to you, That in this place is one greater than the temple. But if you had known what this means, I will have mercy, and not sacrifice, you would not have condemned the guiltless. For the Son of man is Lord even of the sabbath day’” (Mat 12:1-3, 6-8).

In my belief in the Lord in the past, I merely knew that when He came to do His work, the Lord Jesus didn’t keep the prohibitions of the Sabbath any more from the conversation in the verse between the Lord Jesus and the Pharisees, but I didn’t understand the deeper significance of these words and what people should know about God from this. Later on, only when I accepted the work of the Lord Jesus’ second coming did I know the true meaning of the word that the Lord Jesus said just then.

God says, “Let us first take a look at this passage: ‘At that time Jesus went on the sabbath day through the corn; and His disciples were an hungered, and began to pluck the ears of corn and to eat.’

“In this text, the first thing we know is that it was the Sabbath day, but the Lord Jesus went out and led His disciples through the corn fields. What is even more ‘treacherous’ is that they even ‘began to pluck the ears of corn and to eat.’ In the Age of Law, Jehovah God’s law stipulated that people could not casually go out or take part in activities on the Sabbath—there were many things that could not be done on the Sabbath. This action on the part of the Lord Jesus was puzzling for those who had lived under the law for a long time, and it even provoked criticism. As for their confusion and how they talked about what Jesus did, we will put that aside for now and first discuss why the Lord Jesus chose to do this on the Sabbath, of all days, and what He wanted to communicate to people who were living under the law through this action. This is the connection between this passage and God’s disposition that I want to talk about. 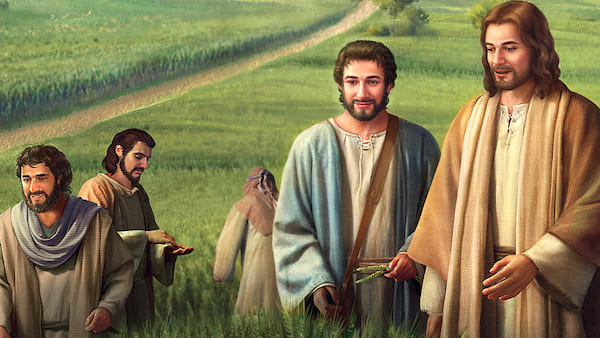 “When the Lord Jesus came, He used His practical actions to tell the people that God had departed the Age of Law and had begun new work, and that this new work did not require the observation of the Sabbath. God’s coming out from the confines of the Sabbath day was just a foretaste of His new work; the real and great work was still to come. When the Lord Jesus began His work, He had already left behind the ‘shackles’ of the Age of Law, and had broken through the regulations and principles of that age. In Him, there was no trace of anything related to the law; He had cast it off entirely and no longer observed it, and He no longer required mankind to observe it. So here you see the Lord Jesus went through the corn fields on the Sabbath, and that the Lord did not rest; He was outside working, and not resting. This action of His was a shock to people’s notions and it communicated to them that He no longer lived under the law, and that He had left the confines of the Sabbath and appeared before mankind and in their midst in a new image, with a new way of working. This action of His told people that He had brought with Him new work, work that began with emerging from being under the law, and departing from the Sabbath. When God carried out His new work, He no longer clung to the past, and He was no longer concerned about the regulations of the Age of Law. Neither was He affected by His work in the previous age, but instead worked on the Sabbath just as He did on every other day, and when His disciples were hungry on the Sabbath, they could pick ears of corn to eat. This was all very normal in God’s eyes. For God, it is permissible to have a new beginning for much of the new work He wants to do and the new words He wants to say. When He begins something new, He neither mentions His previous work nor continues to carry it out. Because God has His principles in His work, when He wants to begin new work, it is when He wants to bring mankind into a new stage of His work, and when His work will enter a higher phase. If people continue to act according to the old sayings or regulations or continue to hold fast to them, He will not remember or approve that. This is because He has already brought new work, and has entered a new phase of His work. When He initiates new work, He appears to mankind with a completely new image, from a completely new angle, and in a completely new way so that people can see different aspects of His disposition and what He has and is. This is one of His goals in His new work.”

We welcome you to use our Bible Verse of the Day to enrich your spiritual life.

Hello Sister Wang, In your letter you mention: “I think that when the Lord Jesus said ‘It is finished’ moments before He took His last breath, it meant that the work of salvation had been done and that we have been saved by God and that God won’t do any new work. …” Regarding this […]

It is recorded in the Bible, “And it came to pass, as he sat at meat with them, he took bread, and blessed it, and broke, and gave to them. And their eyes were opened, and they knew him; and he vanished out of their sight. And they said one to another, Did not our […]

When the Lord Jesus worked, He said many words to the people of that time. Some of them are very straightforward. For example, the Lord Jesus often said, “Truly, truly, I say to you …” Some are indirect, just as what the Lord Jesus said to Philip, “I am in the Father, and the Father […]

Three Major Reasons Why the Lord Jesus’ Work Was Obstructed

The autumn wind blew the yellow withered leaves of the trees off. They drifted in the air with the wind; then, some fell into the flower beds on the roadsides and others fell on the road. The scattered leaves could be seen everywhere, which naturally gave a feeling of desolation. After walking out of the […]