And Jesus took the loaves; and when he had given thanks, he distributed to the disciples, and the disciples to them that were set down; and likewise of the fishes as much as they would.

The Bible recorded the miracle performed by the Lord Jesus: feeding five thousand with five loaves of bread and two fish. From this we can see the Lord Jesus’ love and mercy to mankind. When the Lord Jesus knew those who sit there only wanted to have a good meal and gain blessings from Him, but did not plan to follow Him, He still had mercy on them. What is God’s will by doing so? A spiritual book says, “Facing these five thousand people with empty stomachs who only wanted to eat a full meal, facing these people full of curiosity and hopes about Him, the Lord Jesus only thought of utilizing this miracle to bestow grace upon them. However, He did not get His hopes up that they would become His followers, for He knew that they just wanted to get in on the fun and to eat their fill, so He made the best of what He had there, and used five loaves of bread and two fish to feed five thousand people. He opened the eyes of these people who enjoyed entertainment, who wanted to see miracles, and they saw with their own eyes the things that God incarnate could complete. Although the Lord Jesus used something tangible to satisfy their curiosity, He already knew in His heart that these five thousand people just wanted to have a good meal, so He didn’t say anything at all or preach to them at all—He just let them see this miracle occur. He absolutely could not treat these people the same as He treated His disciples who truly followed Him, but in God’s heart, all creatures were under His rule, and He would allow all creatures in His sight to enjoy the grace of God when it was necessary. Even though these people did not know who He was or understand Him, or have any particular impression of Him or gratitude toward Him even after they had eaten the loaves and fish, this wasn’t something that God took issue with—He gave these people a wonderful opportunity to enjoy the grace of God. Some people say that God is principled in what He does, and He does not watch over or protect non-believers, and He especially does not allow them to enjoy His grace. Is that actually the case? In God’s eyes, as long as they are living creatures that He Himself created, He will manage and care for them; He will treat them, plan for them, and rule them in different ways. These are the thoughts and attitude of God toward all things.” The passage tells us: As for those who only wanted to eat a full meal but were unwilling to pursue the truth or seek to know God, God just gave them mercy and fed them, because they would not follow Him even though they were full. In God’s heart, He didn’t hate them or require anything from them. This is the revelation of God’s benevolent essence. However, if we only believe in God for a full meal, for peace, or for future blessings, but don’t seek the truth or pursue to know God, we will never gain God’s praise, let alone gain the truth and the life. 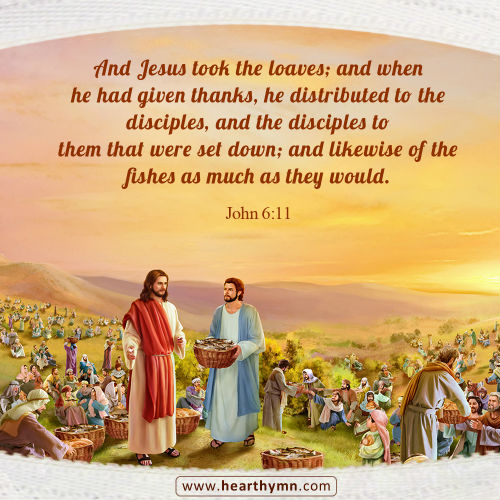 God’s Words Are the Water of Life - Matthew 4:4

A Commentary on Proverbs 15:18