Home » Bible Study » Bible Verse of the Day »
And their eyes were opened; and Jesus straightly charged them, saying, See that no man know it.

And their eyes were opened; and Jesus straightly charged them, saying, See that no man know it.

Why the Lord warned man not to tell anyone after performing miracles?

As is known to us, the wisdom of God surpasses man’s imagination. Every stage of God’s work is done by the result to achieve instead of by man’s notions and conceptions. God will do whatever is beneficial to His work and to His salvation for man. Through studying the Bible, it’s not difficult to find that when the Lord Jesus was born, He underwent the hunting of King Herod. (See Mat 2:12–21.) Think about that carefully, even though the Lord Jesus was only known to a few people at that time, He was hunted by King Herod. If He were known openly, would He be able to survive in this world or grow up enough to take on God’s redemptive work? From this passage, we can see that wherever God did His work, He would be persecuted by the ruler. Thus, in order to carry out God’s work smoothly, it was necessary for the Lord Jesus to exhort those who got cured and received revelations not to leak out His identity as God. Otherwise, it would interrupt and disturb God’s work.

Furthermore, when the Lord Jesus came to work, the chief priest, scribes and Pharisees were full of hate toward Him. Although they read the Bible, served God in the temple, and were longing for the coming of Messiah for generations, yet when they heard the sermons preached by the Lord Jesus, witnessed the miracles performed by Him, and appreciated from the work and words of the Lord that His words had authority and power, is the truth and can’t be expressed by man, they still deliberately resisted and wildly condemned Him. The Bible says: The Lord Jesus cured the blind men and advised them not to tell anyone else. But they told others once they departed for they thought the Lord did a good thing; they wanted to proclaim the Lord Jesus’ name, rather than to frame Him. However, their good intention disturbed God’s work. The Pharisees condemned the Lord Jesus by using this chance, saying, “He casts out devils through the prince of the devils” (Mat 9:34). According to this record, we can see that the reason why the Lord not want the miracles He performed to be told was because man’s good intentions and zealousness would leave those Pharisees a chance and give them a handle. At that time, the Pharisees wanted to find fault with the Lord Jesus very much. From the fact that they tempted the Lord Jesus many times, it can be seen that once they got a handle, they would put Him to death. Since the Lord Jesus came on earth to complete the redemptive work, before its completion, He would certainly do his work in a secret way. Just as the Lord Jesus said, “My time is not yet come” (John 7:6). It means that the time for His crucifixion had not yet come. So, His identity shouldn’t be known too early by man. To protect His work from being disturbed, interrupted and blocked, He used His wisdom of working in a hidden way. And it was the hidden work that allowed the gospel of the kingdom of heaven to spread, and made a few people know God’s new work.

•  Why Did Jesus Keep the Secret After He Did Miracles? 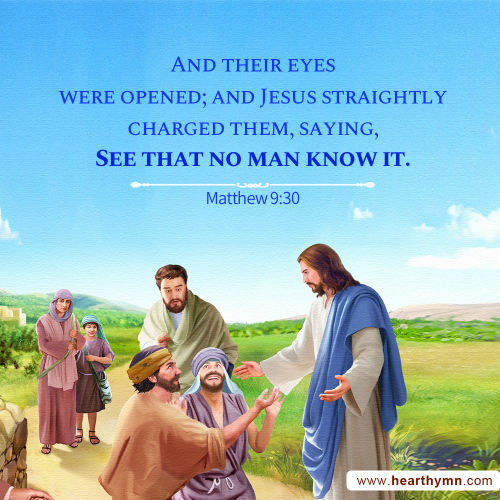 Ready For the Midnight Cry - Matthew 25:6

To Every Man According to His Several Ability - Meaning of Matthew 25:15

The Beam in Your Own Eye—A Commentary on Matthew 7:3–5

Doing the Will of the Father in Heaven - Matthew 7:21
I believe that every Christian brothers and sisters are familiar with this verse. But have we ever considered that how to follow the will of the Heavenly Father? When I began to develop faith in the Lord, I thought that as long as I accepted the salvation of the Lord, I would have a place in the heavenly kingdom.

Judge Not - Matthew 7:1
Today's bible verse: Matthew 7:1 "Judge not, that you be not judged'. The Lord Jesus’ words tell us that God hates man’s judgment. However, in our association with others, we often judge other people in spite of ourselves.

Watch and Pray—A Commentary on Matthew 26:41
Today's bible verse: Matthew 26:41 "Watch and pray, that you enter not into temptation: the spirit indeed is willing, but the flesh is weak".