In 2020, disasters such as wars, fires, insect plagues, plagues, famines are occurring constantly and becoming greater and greater. Many people realize that these signs indicate that the end times are drawing near. So what warning exactly do these signs give us? What do they have to do with the Lord’s return? Let’s read these Bible verses about signs of the end times to learn more about the Lord’s return. 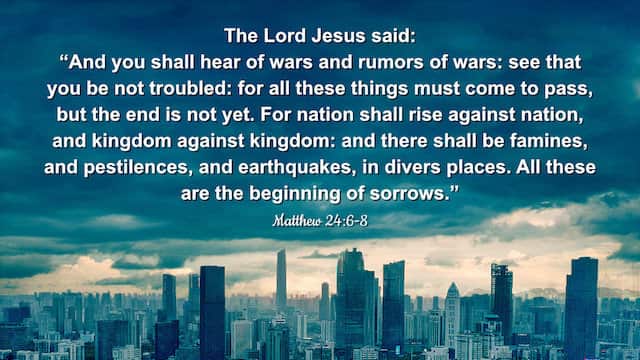 And as he sat on the mount of Olives, the disciples came to him privately, saying, Tell us, when shall these things be? and what shall be the sign of your coming, and of the end of the world?

6And you shall hear of wars and rumors of wars: see that you be not troubled: for all these things must come to pass, but the end is not yet. 7For nation shall rise against nation, and kingdom against kingdom: and there shall be famines, and pestilences, and earthquakes, in divers places. 8All these are the beginning of sorrows.

For then shall be great tribulation, such as was not since the beginning of the world to this time, no, nor ever shall be.

And there were voices, and thunders, and lightning; and there was a great earthquake, such as was not since men were on the earth, so mighty an earthquake, and so great.

12And I beheld when he had opened the sixth seal, and, see, there was a great earthquake; and the sun became black as sackcloth of hair, and the moon became as blood; 13And the stars of heaven fell to the earth, even as a fig tree casts her untimely figs, when she is shaken of a mighty wind.

30And I will show wonders in the heavens and in the earth, blood, and fire, and pillars of smoke. 31The sun shall be turned into darkness, and the moon into blood, before the great and terrible day of the LORD come.

1This know also, that in the last days perilous times shall come. 2For men shall be lovers of their own selves, covetous, boasters, proud, blasphemers, disobedient to parents, unthankful, unholy, 3Without natural affection, truce breakers, false accusers, incontinent, fierce, despisers of those that are good, 4Traitors, heady, high minded, lovers of pleasures more than lovers of God; 5Having a form of godliness, but denying the power thereof: from such turn away.

But as the days of Noe were, so shall also the coming of the Son of man be.

The last days have arrived and countries across the world are in turmoil. There is political disarray, there are famines, pestilences, floods, and droughts appearing everywhere.

In speaking of the last days, this refers to a separate age, one in which Jesus said you will surely encounter disaster, and encounter earthquakes, famines, and plagues, which will show that this is a new age, and is no longer the old Age of Grace.

Excerpted from “The Vision of God’s Work (3)”

All manner of disasters will befall, one after another; all nations and places will experience calamities: Plague, famine, flood, drought, and earthquakes are everywhere. These disasters are not just happening in one or two places, nor will they be over within a day or two; rather, instead they will expand across a greater and greater area, and become more and more severe. During this time, all manner of insect plagues will arise one after another, and the phenomenon of cannibalism will occur everywhere. This is My judgment upon all nations and peoples.

In the world, earthquakes are the beginning of disaster. First, I make the world—the earth, that is—change, and afterward come plagues and famines. This is My plan, and these are My steps, and I will mobilize everything to serve Me in order to complete My management plan. Thus, the entire universe world shall be destroyed, even without My direct intervention. When I first became flesh and was nailed to the cross, the earth shook tremendously, and it will be the same when the end comes. Earthquakes will begin at the very moment I enter the spiritual realm from the flesh. Thus, the firstborn sons will absolutely not suffer from disaster, whereas those who are not firstborn sons will be left to suffer amid the disasters. Therefore, from a human perspective, everyone is willing to be a firstborn son.

• The Days of Noah Have Come. Do You Hear God’s Voice in the Last Days?

• Where will Jesus Return and Appear?

• Bible Verses About the Great Tribulation

• Bible Verses About Kingdom of Heaven

• Bible Verses About the New Heavens and New Earth

Where Is Our Refuge From the Widespread Terror Attacks?

Following the Manchester Arena bombing on May 22 which killed 22 people, another terror attack took place at London Bridge and Borough Market at around 10 P.M. Saturday.

The Rare Astronomical Spectacle “Super Blood Wolf Moon” Is to Appear, Jewish Rabbi: The End of the World Is Near.

Two supermoons will appear successively on 19th February and 21st March 2019. What warnings does this give to us?