Wuhan coronavirus, East Africa’s plague of locusts, Australian bushfires, and some other disasters strike almost at the same time—disasters are getting worse and worse, and the prophecies regarding the Lord’s return have already been fulfilled. But why haven’t we been raptured? What can we do to be raptured? 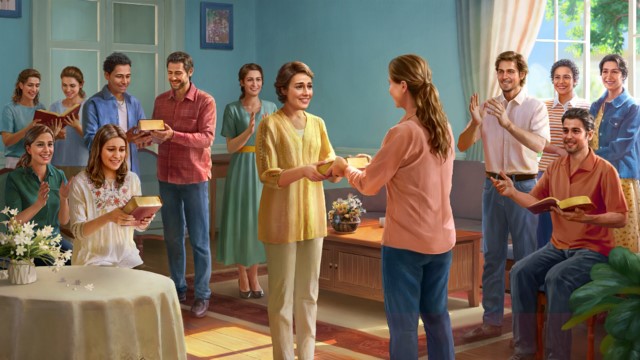 At the end of 2019, the coronavirus–infected pneumonia occurred in Wuhan, China. Now, the coronavirus has spread to Many countries and regions around the world. The World Health Organization announced that this was a public health emergency of international concern. The unprecedented bushfires in Australia have also caused widespread concern. In addition, in 2020 East Africa suffered its worst invasion of desert locusts in 25 years. As a result, a severe food crisis has now occurred in many African nations. The worst torrential rain in 100 years hit southeast Brazil and destroyed countless houses. … Now throughout the world, plagues, fires, plagues of locusts, floods and other disasters are getting bigger and bigger. Furthermore, the four blood moons have already appeared. All these signs indicate that the prophecy regarding the return of the Lord Jesus has been fulfilled, which is what the Lord Jesus prophesied about the signs of His return: “Nation shall rise against nation, and kingdom against kingdom; And great earthquakes shall be in divers places, and famines, and pestilences; and fearful sights and great signs shall there be from heaven” (Luke 21:10-11).

Many brothers and sisters are very anxious and confused: Now that disasters are so great and the prophecy of the Lord’s return has been fulfilled, why haven’t we been raptured in the air? The Lord is faithful and will fulfill His promise to take us in the last days. So why haven’t we been raptured now in the air, as He promised us? Is there something wrong with our understanding of rapture? About this problem, let’s have a fellowship together today.

Does Rapture Really Mean Being Caught Up in Heaven?

We expect to be raptured in the air before the disasters and meet with the Lord when He returns, according to 1 Thessalonians 4:17, “Then we which are alive and remain shall be caught up together with them in the clouds, to meet the Lord in the air: and so shall we ever be with the Lord.” Actually, this verse we hold on to is Paul’s words, not the words of the Lord Jesus. Although Paul’s words were recorded in the Bible, he was only an apostle. Some of his words were out of the Holy Spirit’s enlightenment, but some were his notions and imaginations, which didn’t accord with the truth. Therefore, in welcoming the Lord’s return, we should take the words of the Lord Jesus as the standard, and only this is in line with God’s will.

In fact, we can discover this from the fact of God’s work. Just like when God first created man, He formed man of the dust of the ground, and led Adam and Eve to worship Him and manage all things on earth. In the age of Noah, God did not take Noah and his family up in the air to avoid the flood, but instead ordered Noah to build an ark on earth. It was also on earth that Noah’s family lived and multiplied after the flood. In the late period of the Age of Law, when people were in danger of execution for violating the laws, God did not catch them up in the air to let them take the sin offering. Instead, God personally became flesh, and was crucified practically for humans to redeem them from their sins. From the fact of God’s work, we see that God has always been doing His work on earth to save people and lead them to live and worship God, and He has never taken anyone up in the air. So, our expectation to be raptured in the air isn’t in line with the fact of God’s work.

What Is Rapture Before the Disasters?

To understand what it means to be raptured before the disasters, let’s first talk about what rapture is. God’s word says: “‘Being caught up’ is not being taken from a low place to a high place as people imagine. This is a huge mistake. Being caught up is referring to My predestining and selecting. It is targeted at all those I have predestined and chosen. Those who have gained the status of firstborn son, the status of sons, or people, are all those who have been caught up. This is most incompatible with people’s notions. Those who have a share in My house in the future are all people who have been caught up before Me. This is absolutely true, never-changing, and cannot be refuted by anybody. This is the counterattack against Satan. Anyone I predestined shall be caught up before Me.” Now, we can understand that rapture does not mean being caught up in the air to meet the Lord as we have imagined, but means that when God comes to earth to work and people hear His voice, they can recognize Him, accept and obey His new work, and come before Him. This is the true meaning of rapture. It is similar to when the Lord Jesus came to do the work of redemption at the end of the Age of Law. Those who heard the Lord’s words and recognized His voice believed firmly that He was the Messiah and Christ, and thus accepted the Lord’s salvation. This means that they were raptured before God. Peter, Matthew, Luke, and all the others who accept the Lord’s salvation were the ones raptured before the Lord.

How Can We Be Raptured Before the Disasters?

The Lord Jesus said, “I have yet many things to say to you, but you cannot bear them now. However, when He, the Spirit of truth, is come, He will guide you into all truth: for He shall not speak of Himself; but whatever He shall hear, that shall He speak: and He will show you things to come” (John 16: 12-13). In Revelation chapters 2 to 3, it’s prophesied several times: “He that has an ear, let him hear what the Spirit said to the churches.” And Revelation 3:20 also says: “Behold, I stand at the door, and knock: if any man hear My voice, and open the door, I will come in to him, and will sup with him, and he with Me.” From the words of the Lord Jesus, we understand that the Lord will come in the last days to guide us into all truth. In other words, God will speak words to the churches, and knock at the door of our heart with His words. Being wise virgins is the only way for us to welcome the Lord and be raptured before the Lord prior to the disasters: We should humbly seek and investigate it when we hear some people testify that the Lord has come back and spoken words, and should pay attention to discerning whether those words are the voice of God and whether they are authoritative and powerful. In other words, whether a person can be raptured before God depends on whether they can recognize God’s voice, whether they can humbly seek the Holy Spirit’s words to the churches, and keep up with the footsteps of God. This is the key to be raptured before God’s throne, just like Peter, John, and all the other people who accepted the Lord’s salvation finally recognized the Lord’s voice from His words and work and followed the Lamb’s footsteps because they had a heart to humbly seek and focused on listening to the Lord Jesus’ preachings.

Now, it is the final period of the last days. Disasters are spreading everywhere—plagues, fires, floods, etc. It is imminent to seek the Lord’s appearance, which is directly related to whether we can be raptured. So, we should now be wise virgins, seek which church is testifying the Lord’s return and that the Holy Spirit has spoken words to the churches. When we hear the news of the Lord’s return, we can’t define according to our notions and imaginations, but should pay attention to whether that is the expression of the truth or the voice of God. This is the only way we can avoid missing the opportunity of rapture.

How to Prepare for the Second Coming of Jesus Christ

When believing in the Lord in China, I often heard pastors say, “Anyone who testifies that the Lord has returned in the flesh is false. We must be careful lest we be deceived and lose the chance of entering the heavenly kingdom. That’s because the Bible records, ‘You men of Galilee, why stand you gazing […]

9 Years Later, I Reread the Verses of Jesus Coming in the Clouds and Welcomed the Lord’s Appearance

One afternoon in June, it was stifling, without a breath of wind. At that time, I was resting on a bamboo chair at home. Suddenly I heard someone call “Auntie.” I saw that it was my nephew Xiaofang, who was accompanied by one of his friends who dressed elegantly and looked affable. Then I welcomed […]

Ming’ai had been a Catholic since she was small. She always insisted on reading the Bible and going to mass, and saying confession to the priest once a year, and this went on unbroken for over 40 years. When she heard the news that the Lord had returned, however, she rejected the Lord’s salvation many […]

The meeting began. Pastor Yu was leading brothers and sisters in reading the Bible, “Then we which are alive and remain shall be caught up together with them in the clouds, to meet the Lord in the air: and so shall we ever be with the Lord” (1 Thessalonians 4:17). Then, Pastor Yu fellowshiped, “Now […]