The Faith of the Canaanite Woman Is Great. A Commentary on Matthew 15:28

Then Jesus answered and said to her, O woman, great is your faith: be it to you even as you will. And her daughter was made whole from that very hour.

It is recorded in the New Testament, “And, behold, a woman of Canaan came out of the same coasts, and cried to him, saying, Have mercy on me, O Lord, you son of David; my daughter is grievously vexed with a devil. But he answered her not a word. And his disciples came and sought him, saying, Send her away; for she cries after us. But he answered and said, I am not sent but to the lost sheep of the house of Israel. Then came she and worshipped him, saying, Lord, help me. But he answered and said, It is not meet to take the children’s bread, and to cast it to dogs. And she said, Truth, Lord: yet the dogs eat of the crumbs which fall from their masters’ table. Then Jesus answered and said to her, O woman, great is your faith: be it to you even as you will. And her daughter was made whole from that very hour” (Mat 15:22-28).

From this passage of words, we can see that the canaanite woman affirmed the Lord to be God in her heart, so she didn’t care what the Lord Jesus saw her as, what was the Lord’s attitude, or in what way the Lord treated her. She was possessed of the sense of a creature when she asked the Lord for help: no matter how God did, God’s position and identity wouldn’t change in her heart. Her faith was precious, and this was most praised by God. 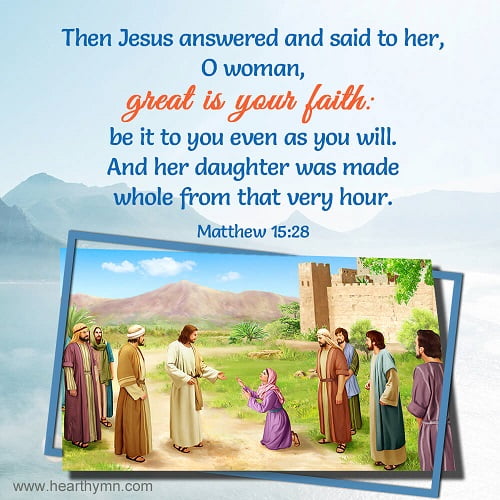 All Is Vanity and Vexation of Spirit. A Commentary on Ecclesiastes 1:14

All Things Are Possible If You Believe - Mark 9:23

Walk With the Wise. A Commentary on Proverbs 13:20

Today’s Verse I called on the LORD in distress: the LORD answered me, and set me in a large place. The LORD is on my side; I will not fear: what can man do to me? - Psalm 118:5-6 Thoughts on Today’s Verse… God created the heavens and earth and all things, and all things […]

Today’s Verse Yes, though I walk through the valley of the shadow of death, I will fear no evil: for you are with me; your rod and your staff they comfort me. - Psalm 23:4 Although David was weak in tribulations and adversity, he didn’t dread anything because he understood that Jehovah God would be […]

Leave Parents and Join to Your Spouse. A Commentary on Matthew 19:5

Today’s Verse And said, For this cause shall a man leave father and mother, and shall join to his wife: and they two shall be one flesh? - Matthew 19:5 Thoughts on Today's Verse: Marriage is a key event in the life of every one of us. We harbor many illusions about marriage before we […]