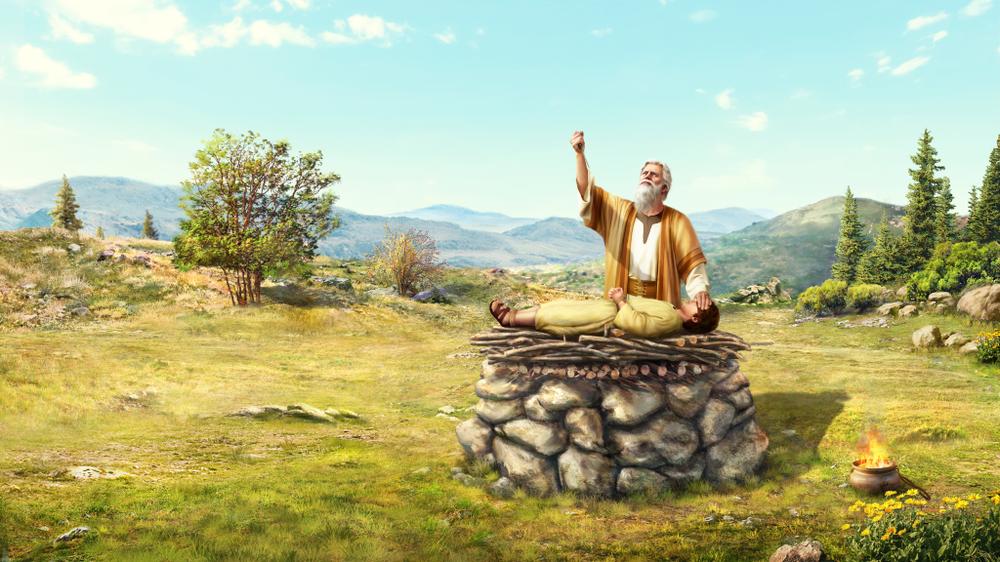 1. God’s might is unfathomable to man. No one can hinder the work that God intends to accomplish.

As it is recorded in the Scripture, when Abraham was 100 years old, and his wife Sarah 90 years old, God promised them a son. At that time, Abraham fell on his face laughing, and said to himself, “Shall a child be born to him that is an hundred years old? and shall Sarah, that is ninety years old, bear?” (Genesis 17:17). To Abraham, it was impossible, as if God created man, yet He doesn’t know when someone is capable of bearing children. In Abraham’s imagination, he believed that he couldn’t have a son at the age of 100, because both Sarah and himself had passed the age of bearing children. From our perspective, we also believe this is something impossible for mankind. However, the fact countered Abraham’s notions, as well as ours: Isaac was born at the time God promised. For humans, it is impossible, but it can be accomplished by God.

A book says, “God does not interfere in whatever man thinks or knows, yet neither does He forgo His plan, or abandon His work, because man does not believe or understand. The facts are thus accomplished according to the plan and thoughts of God. This is precisely what we see in the Bible: God caused Isaac to be born at the time He had set. Do the facts prove that the behavior and conduct of man hindered the work of God? They did not hinder the work of God! Did man’s little faith in God, and his conceptions and imagination about God affect God’s work? No, they did not! Not in the least! God’s management plan is unaffected by any man, matter, or environment. All that He resolves to do will be completed and accomplished on time and according to His plan, and His work cannot be interfered with by any man. God ignores certain aspects of man’s foolishness and ignorance, and even certain aspects of man’s resistance and conceptions toward Him, doing the work that He must do regardless. This is God’s disposition, and is a reflection of His omnipotence” (“God’s Work, God’s Disposition, and God Himself II”).

From these words we can see that God’s work was not hindered by Abraham’s little faith. No matter what Abraham thought, God would still accomplish what He had promised according to His plan. Like the word “shall” in “But My covenant will I establish with Isaac, which Sarah shall bear to you at this set time in the next year” (Genesis 17:21); it reveals God’s authority and power; no one can hinder the things God intends to accomplish, they will be accomplished one after the other according to God’s plan. This story allowed me to see that God’s might is unfathomable to man. God’s words accomplish everything. Once God speaks, whatever He says is then accomplished. Just like in the beginning, when God created the heavens and earth and all things, God said “Let there be light,” and there was light. All things come into being in accordance with God’s words. God’s words have authority and power. This is God’s disposition, authority, and is a reflection of His omnipotence.

After having an understanding of God’s almightiness and sovereignty, authority and power, we will develop true faith in God. When God’s work does not fit our notions, we should not measure, analyze, or scrutinize it based on our thinking and imagination. Instead, we should obey God’s work and leadership, act according to God’s words. This is the sense we should have, and also what we as creations should do, just like Abraham. Through his experience, he gained true knowledge and understanding of God’s almightiness and wisdom. And when God required him to offer Isaac, he could obey unconditionally. In the end, because of his sincerity and obedience, he received God’s great blessing—God promised that his offspring would be as numerous as the stars in the sky, and the grains of sand on a beach.

When Abraham was 100 years old, God gave him a son, Isaac. When Isaac was in his teens, God asked Abraham to offer Isaac as an offering. Abraham did not reason with God or have any complaints, much less did he resist God. He did what God commanded him to do. As it is recorded in the Scripture, “And Abraham rose up early in the morning, and saddled his ass, and took two of his young men with him, and Isaac his son, and split the wood for the burnt offering, and rose up, and went to the place of which God had told him” (Genesis 22:3). “And they came to the place which God had told him of; and Abraham built an altar there, and laid the wood in order, and bound Isaac his son, and laid him on the altar on the wood. And Abraham stretched forth his hand, and took the knife to slay his son” (Genesis 22:9-10). “By Myself have I sworn, said Jehovah, for because you have done this thing, and have not withheld your son, your only son: That in blessing I will bless you, and in multiplying I will multiply your seed as the stars of the heaven, and as the sand which is on the sea shore; and your seed shall possess the gate of his enemies; And in your seed shall all the nations of the earth be blessed; because you have obeyed My voice” (Genesis 22:16-18).

The book says, “What do you see in God’s promise to Abraham? God bestowed great blessings upon Abraham simply because he listened to God’s words. Although, on the surface, this seems normal, and a matter of course, in it we see God’s heart: God especially treasures man’s obedience to Him, and cherishes man’s understanding of Him and sincerity toward Him” (“God’s Work, God’s Disposition, and God Himself II”). “To God, no matter whether a person is great or insignificant, as long as they can listen to Him, obey His instructions and what He entrusts, and can cooperate with His work, His will, and His plan, so that His will and His plan can be accomplished smoothly, then that conduct is worthy of His commemoration and worthy of receiving His blessing. God treasures such people, and He cherishes their actions and their love and affection for Him. This is God’s attitude” (“God’s Work, God’s Disposition, and God Himself I”).

And there is also Job, who was blessed by God because of standing witness for God. When God took away all his wealth and children, he didn’t sin with his mouth but praised God’s name. Later, when his body was covered with sores, he could still obey God, fear God and shun evil. When Job had those testimonies of obeying God, God doubled His blessings upon Job, and extend Job’s life expectancy.

After knowing the principles of God blessing people, we also have some understanding of God’s righteous disposition. We will not believe in God, thinking that we will be blessed by God by going with the flow. Instead, we will hope that we can believe in and obey God like Abraham and Job did, because only then can we receive God’s blessings.

After understanding all this, I saw that God’s love is boundless. God is full of mercy and love for us. God will not reprimand or condemn us because of a small mistake or a small transgression, or our speculations, doubts, and misconceptions regarding Him. What God values are our sincerity and obedience. Often, we cannot fully understand God’s work, but we know God’s essence is love, His thoughts are always good. Therefore, if we obey the work God is going to do upon us, we will surely receive God’s blessing like Abraham did.

Besides Abraham’s faith, what else can we learn from the story of Abraham? I got the following 3 aspects of inspiration.

The Bible recorded that Abraham bore witness for God and received His blessings. Abraham’s three merits are worthy of our imitation.

Why Did God Command Abraham to Sacrifice Isaac?

It is recorded in the Bible, “And he said, Take now your son, your only son Isaac, whom you love, and get you into the land of Moriah; and offer him t…