As we all know, when God intended to destroy Nineveh and Sodom, God commanded Jonah and two angels respectively to convey His will—the warnings before destruction. The Ninevites believed God’s warning, truly repented to God, and thus were able to survive. But the people of Sodom not only didn’t ask the angels’ purpose, but even tried to harm them; they stood against God and hurled invective at God, thereby ending up being destroyed by God. 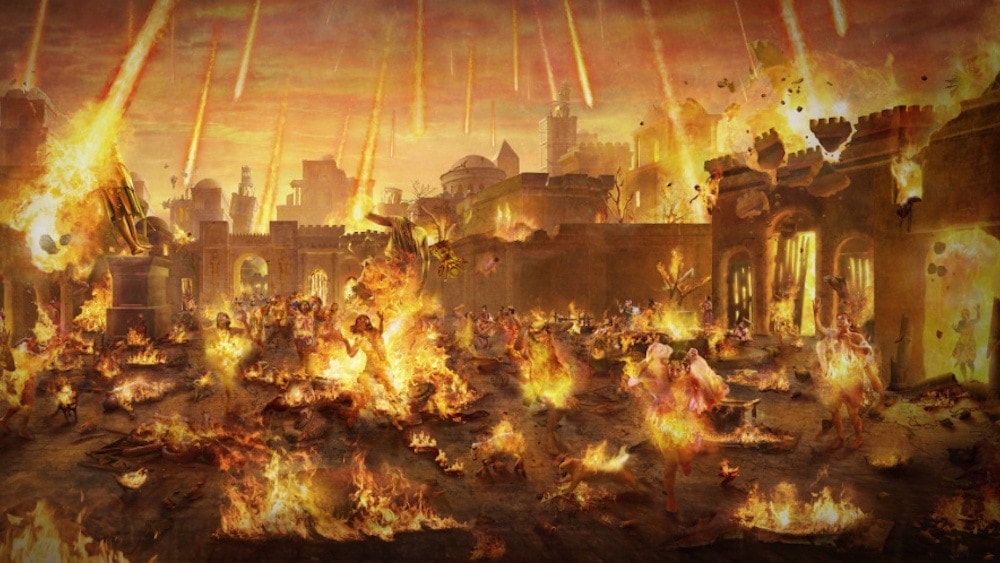 In Genesis 19:4–9, it is recorded, “But before they lay down, the men of the city, even the men of Sodom, compassed the house round, both old and young, all the people from every quarter: And they called to Lot, and said to him, Where are the men which came in to you this night? bring them out to us, that we may know them. And Lot went out at the door to them, and shut the door after him, And said, I pray you, brothers, do not so wickedly. Behold now, I have two daughters which have not known man; let me, I pray you, bring them out to you, and do you to them as is good in your eyes: only to these men do nothing; for therefore came they under the shadow of my roof. And they said, Stand back. And they said again, This one fellow came in to sojourn, and he will needs be a judge: now will we deal worse with you, than with them. And they pressed sore on the man, even Lot, and came near to break the door.”

From these verses, we can see that when the two angels came to Sodom, the people there sought to wantonly harm them and Lot who received them. The men of Sodom knew nothing about who the two angels were, where they had come from, and why they were there, much less did they ask about these things, yet they tried their utmost to break the door to harm the two angels. When Lot offered to exchange his two daughters for the angels, the people of Sodom diabolically jumped at Lot and wanted to harm him too. This sufficiently shows that the people there were corrupted to the utmost.

God’s words say: “This humanity had become corrupt in the extreme. These people did not know who God was or where they themselves had come from. If you mentioned God to them, they would attack, slander, and blaspheme. Even when God’s servants had come to spread His warning, these corrupt people not only showed no signs of repentance and did not abandon their wicked conduct, but on the contrary, they brazenly harmed God’s servants. What they expressed and revealed was their nature essence of extreme hostility toward God. We can see that these corrupt people’s resistance against God was more than a revelation of their corrupt disposition, just as it was more than an instance of slandering or mocking which simply stemmed from a lack of understanding of the truth. Neither stupidity nor ignorance caused their wicked conduct; they acted in this way not because they had been deceived, and it was certainly not because they had been misled. Their conduct had reached the level of flagrantly brazen antagonism, opposition and clamoring against God. Without a doubt, this kind of human behavior would enrage God, and it would enrage His disposition—a disposition that must not be offended. Therefore, God directly and openly unleashed His wrath and His majesty; this was a true revelation of His righteous disposition. Faced with a city overflowing with sin, God desired to destroy it in the swiftest manner possible, to eradicate the people within it and the entirety of their sins in the most complete way, to make this city’s people cease to exist and to stop the sin within this place from multiplying. The swiftest and most complete way of doing so was to burn it down with fire” (“God Himself, the Unique II”).

The people of Sodom had ample opportunities to repent to God, but not only did they not repent, but instead they went even further to harm the two messengers who came to save Lot and his family according to God’s will, and they also wanted to harm Lot, the only person in this city who worshiped God. The essence of their actions was resisting God and stubbornly opposing Him. Their evil deeds of hating God, loathing the truth, and driving away justice once again incited God’s wrath and offended God’s righteous disposition, and thus they were eventually destroyed by God. Contrarily, Lot worshiped God—in such a fortress of demons, he didn’t follow other people in doing evil, but could receive God’s messengers and protect them at all costs. God remembered Lot’s righteous deed and so enabled him and his two daughters to survive the destruction.

Let’s look at China. It is as alluring and bewitching as Sodom and full of evil. There are star-ranked hotels and nightclubs everywhere. Most people here worship evil and don’t love justice and the light. They live lives of eating, drinking and merry-making, enjoy living in luxurious ease and comfort and seek status and power. Worse still, since the foundation of the People’s Republic of China, the CCP government’s persecution of Christianity has grown increasingly savage. It has burned and dumped into the ocean countless copies of the Bible, has closed and demolished thousands of churches and has forcibly taken down innumerable crosses. Countless Christians have been arrested and imprisoned and some have even been persecuted to death. … The CCP’s actions are in opposition to God and no different from the people of Sodom’s resistance to God in substance. Just think: Apart from China, how many countries or cities are becoming the modern-day Sodom? How can people in these places avoid treading the path of destruction like Sodom?

At this point, let’s think about the Ninevites. Though they were as extremely corrupted as the people of Sodom and also suffered God’s loathing, when Jonah communicated God’s warning to them, they believed it is from God, and that since God said He would destroy their city in forty days, God would surely do it according to His will if they didn’t repent. Therefore, everyone from the king to the common people confessed and repented in sackcloth and ashes—they gave up their violent behavior and left their evil ways behind. Because of their true repentance before God, God took mercy on them and allowed them to survive instead of destroying them. From this, we can see that the Ninevites were fortunate enough to survive because they believed God’s words and truly repented.

From the stories of God destroying Sodom and saving Nineveh, we can know that those who resist, oppose and are hostile to God will eventually fall into disasters and that only those who believe God, repent to Him and accept His salvation will be able to earn His mercy and have the opportunity to survive. Especially in the last days—an evil and licentious age—when the world is engulfed in constant disasters and plagues, we’ll perish in disasters at any time if we still don’t truly repent like the people of Sodom. So how can we gain God’s mercy during these last days?

The Bible records: “Who are kept by the power of God through faith to salvation ready to be revealed in the last time” (1 Peter 1:5). “So Christ was once offered to bear the sins of many; and to them that look for Him shall He appear the second time without sin to salvation” (Hebrews 9:28). “And I saw another angel fly in the middle of heaven, having the everlasting gospel to preach to them that dwell on the earth, and to every nation, and kindred, and tongue, and people” (Revelation 14:6). These verses show us that in the last days, the Lord will return, that is, He will appear among men the second time. So when someone spreads to us the Lord’s salvation of the last days, we absolutely must not wantonly condemn and attack them like the people of Sodom did, even if we don’t understand. If it really is the Lord appearing to us the second time and we oppose and resist it, we’ll have offended God’s disposition.

Nowadays, various disasters continue to happen everywhere, such as plagues, fires, floods and earthquakes. The prophecies of the Lord’s return have basically been fulfilled, and now is precisely the most crucial time when we will welcome the Lord. So how can we greet Him? The Lord Jesus said: “And at midnight there was a cry made, Behold, the bridegroom comes; go you out to meet him” (Matthew 25:6). “Behold, I stand at the door, and knock: if any man hear My voice, and open the door, I will come in to him, and will sup with him, and he with Me” (Revelation 3:20). “My sheep hear My voice, and I know them, and they follow Me” (John 10:27). Clearly, when the Lord returns in the last days, He shall speak words to seek His flock. If we hear someone testify that the Lord has returned, we have to listen to God’s voice and welcome the Lord. By doing so, we will have the opportunity to gain the Lord’s salvation of the last days, and will have His protection through the great disasters and remain. Obviously, our attitudes toward the gospel of the Lord’s return determine our attitudes in how we treat God and our outcomes.

Read more on ourSecond Coming of Jesus page, or click on the related articles below.

• Now Is as in the Days of Noah: Signs of the Lord’s Return Have Appeared

• In What Way Will the Lord’s Return Happen in the Last Days?

Tags: Signs of the End Times Study on Sodom and Gomorrah
Previous

How Should We Watch and Wait to Welcome the Lord’s coming?

Watch Out! Two Ways of the Second Coming of Jesus

Two supermoons will appear successively on 19th February and 21st March 2019. What warnings does this give to us?

Now the days of Noah have come and the signs of the Lord’s return have already appeared. So how will the Lord return in the last days? Read to learn more.