Jesus said to him, Thomas, because you have seen me, you have believed: blessed are they that have not seen, and yet have believed.

In the past, when I saw this verse, I only thought these were the Lord’s words to Thomas. But several days ago, I saw a passage on the Internet, which made me realize that Thomas represents a type of person and the words spoken by the Lord are also a caution and a warning for us. Share this passage with you: “Thomas represents a type of person who believes in God yet doubts God. They are of a suspicious nature, have sinister hearts, are treacherous, and do not believe in the things that God can complete. They do not believe in God’s omnipotence and His rule, and they don’t believe in God incarnate. However, the Lord Jesus’ resurrection was a slap in the face to them, and it also provided them with an opportunity to discover their own doubt, to recognize their own doubt, and to acknowledge their own treachery, thus truly believing in the existence and resurrection of the Lord Jesus. What happened with Thomas was a warning and a caution for later generations so that more people could warn themselves not to be doubting like Thomas, and if they were, they would sink into the darkness. If you follow God, but just like Thomas, you always want to touch the Lord’s rib and feel His nail marks to confirm, to verify, to speculate on whether or not God exists, God will forsake you. So, the Lord Jesus requires people to not be like Thomas, only believing what they can see with their own eyes, but to be a pure, honest person, to not harbor doubts toward God, but only believe in and follow Him. This type of person is blessed. This is a very small requirement the Lord Jesus has for people, and a warning for His followers.”

After reading these words, I understand the reason why the people such as Thomas have failed. It is because that their hearts are too deceitful. They always assess the authenticity and reason of things with their own eyes, clinging to the view “seeing is believing,” and do not have the eagerness to seek the truth, this kind of people finally are ruined by their deceitfulness. Now we all yearn for the second coming of Jesus, but many people believe that the Jesus who does not ride upon a white cloud is a false Christ. No matter who testify that the Lord has returned, they do not believe and cling to their own conceptions and only believe when they see the Lord come openly on clouds with their own eyes. Don’t they have the same viewpoint as Thomas? If we hear someone preaches the Lord has come, we don’t put aside our imaginations and conceptions, or follow the masses, waiting and seeing, or hesitate to seek and investigate the true way, we are surely unable to see the Lord’s appearance, thus we’ll lose the opportunity to gain salvation and enter the kingdom of heaven. The Lord said, “Because you have seen me, you have believed: blessed are they that have not seen, and yet have believed.” These words are just the Lord’s reminders of us so that we won’t follow in the footsteps of those who had failed.

• Lessons on Doubting Thomas: Those Who Believe When They Have Not Seen Are True Believers

• Believe in God by Faith, Not by Sight—A Commentary on 2 Corinthians 5:7

• Significance of the Lord Jesus’ Appearance to Thomas

• Are You Thomas or Peter? 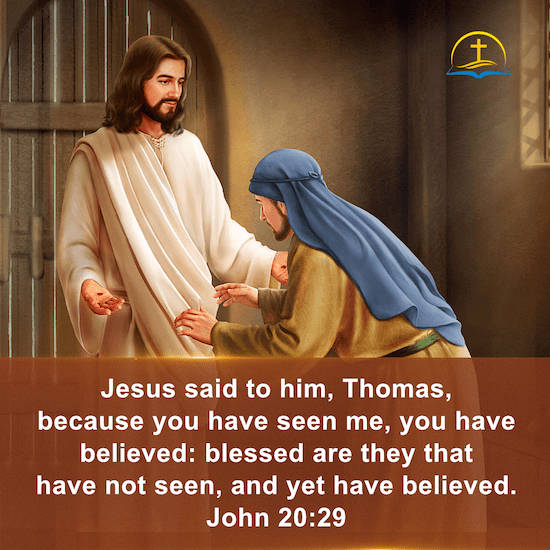 Meaning of Matthew 5:6 “Blessed Are They Which Do Hunger and Thirst After Righteousness”

The Meaning of Matthew 4:17 “Repent: for the Kingdom of Heaven Is at Hand”

Read these 15 Bible verses about faith, which will strengthen your faith in God and help you build a normal relationship with God.

Bible Verses about Trust: Once I read one sentence about trust, “Trust is a kind of character trait which is most valued and deficient in today's world.”

After I welcomed the Lord’s return, misfortunes befell me for several times. It was God’s words that guided me to overcome Satan’s temptations.