I believe that like me, all the brothers and sisters in the Lord have received a lot of peace and blessings from the Lord, and that we all have been resolved to follow the Lord all our life. I remember, at that time I was fervent within. In order to repay the Lord’s great love, I actively spread the gospel for Him and supported the church, and I had confidence about holding on to His way. Moreover, I constantly contemplated His grace, and I was frequently moved to tears when I prayed, feeling so close to the Lord. I prided myself on being a follower of the Lord.

But unknowingly, that feeling was gone. I grew cold in love as well as in faith, and I had no enjoyment in praying, for I received no response from the Lord, feeling like I was talking to thin air. I no longer prided myself on being a follower of the Lord; instead, I frequently distressed myself about failing to keep the Lord’s teachings. I committed sins and confessed sins every day, totally shackled without release by sins. As a result, I lost my motivation for preaching the gospel, and I even dreaded to have it known that I’m a Christian, for fear that my behaviors couldn’t glorify the Lord, but rather bring shame upon His name. I sometimes felt my belief in the Lord consisted only in paying empty tribute to the name of the Lord Jesus.

At times, I would ask myself, “Can I, who vainly grasp to the name of the Lord Jesus, count as a follower of the Lord? Can it be that the Lord has forsaken me? If not, why can’t I feel His presence? And why do I feel that I have lost the lamp to my feet and the light to my path, and have sunk into the darkness?” 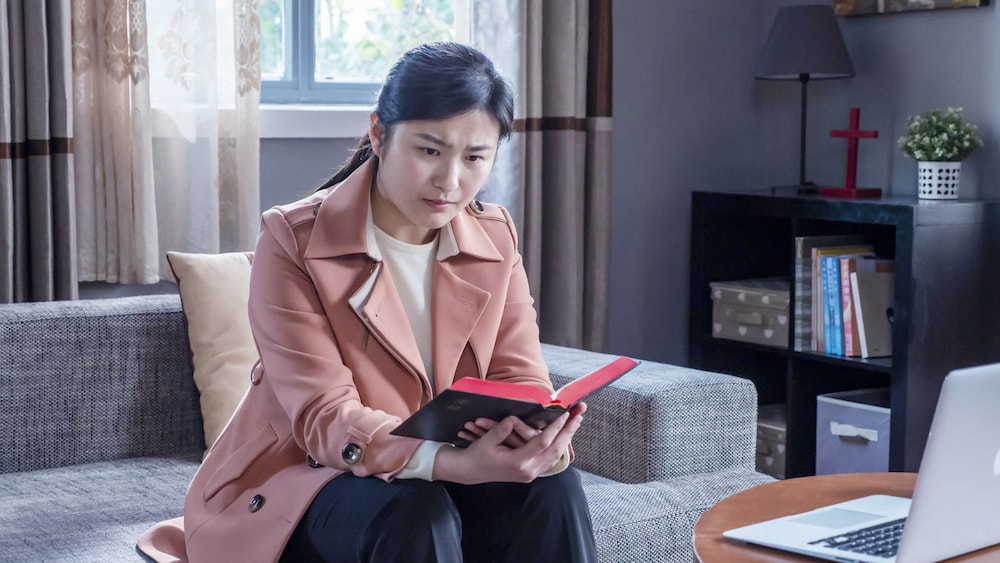 I often studied the Bible, hoping to get the answer in the Scriptures. Later, from the accounts of the Bible, I found that not all the believers in God could be considered as God’s followers. The standard by which God judges whether a person is His follower differs across periods of time. Here, I’d like to share my gains with brothers and sisters, and discuss with you about what kind of people are approved by God and what kind of people are His followers.

In Exodus 6, Jehovah God spoke to Moses, “Why say to the children of Israel, I am Jehovah, and I will bring you out from under the burdens of the Egyptians, and I will rid you out of their bondage, and I will redeem you with a stretched out arm, and with great judgments: And I will take you to Me for a people, and I will be to you a God: and you shall know that I am Jehovah your God, which brings you out from under the burdens of the Egyptians” (Exodus 6:6–7). The scriptures show us that in the Old Testament Age of Law, God chose the Israelites as His people and became their God. He raised up Moses to lead the Israelites out of Egypt, used him to issue the laws to the Israelites, and guided their life on earth. The early Israelites accepted Jehovah God’s leadership, and acted strictly according to the laws. If anyone violated the law, those who committed slight sins would have to offer sacrifices as Jehovah God required, while those who sinned grievously would be put to death. All of them were restricted by the laws. And as they had seen the majesty and wrath of Jehovah’s disposition, they were loyal to Him. Thus they received great grace and protection from God, and were allowed to serve Him in the temple for generations. So, they were followers of God in that age.

However, as mankind had been so corrupted by Satan and that they became even more evil and degenerate, the Jews later were not able to observe the law. They often committed sins and violated the law, which put them in danger of being executed by the law at any time. But, as God cared for mankind, He carried out a new stage of work outside the temple in steps and according to His plan. So, the incarnate Lord Jesus came and brought the gospel of the kingdom of heaven to mankind. He hoped that everyone could come to the light and depart from the temple so as to follow the footsteps of God. The Bible records that, when the Lord Jesus spread the gospel of the kingdom of heaven, He said, “Repent you: for the kingdom of heaven is at hand” (Matthew 3:2). Besides, He healed the sick and cast out demons, and performed many signs and wonders. Then which people are followers of the Lord Jesus?

At that time, the Lord Jesus called to Peter and his brother Andrew on the shores of the Sea of Galilee. The Bible records, “And he said to them, Follow me, and I will make you fishers of men” (Matthew 4:19). Likewise, James the son of Zebedee, and John his brother too were called by the Lord. And He also called upon the other disciples in this way. For example, He said to Philip, “Follow me” (John 1:43). The Lord said so because He looked deep into man’s hearts, and knew that Peter and the rest of them longed for and sought the truth. And indeed, through His words, Peter and the others recognized that the Lord Jesus had come from God. So, when the Lord Jesus called upon them, they all followed Him without hesitation. Eventually, they obtained the supply of the living water of life from the words of the Lord, took His words as a guideline in all things, and enjoyed the work of the Holy Spirit at that time. Thus, they became genuine followers of God in that age.

But during that time, most of the religious leaders headed by the chief priests, scribes, and Pharisees slavishly abided by the law, refused to come out of the temple to seek the truth that the Lord Jesus spoke, and even blasphemed and condemned Him. They said that the Lord Jesus spoke words of blasphemy, blasphemed that He cast out devils by the prince of the devils, and condemned Him for His not keeping the Sabbath. In the end, these religious leaders joined hands with the Roman government and crucified the Lord Jesus. They were stubborn and arrogant and kept to old ways, and in substance they hated the truth and God. They not only did not at all have a heart of seeking the Lord Jesus’ work, but did their utmost in condemning and blaspheming it. Although they acknowledged Jehovah God’s name as holy, they never accepted the Lord Jesus’ work. They could not be considered as God’s followers anymore. This can be obviously seen from the Lord Jesus’ attitude toward them. Just as it is recorded in the Bible, the Lord Jesus said, “But woe to you, scribes and Pharisees, hypocrites!” (Matthew 23:13), and “Many will say to me in that day, Lord, Lord, have we not prophesied in your name? and in your name have cast out devils? and in your name done many wonderful works? And then will I profess to them, I never knew you: depart from me, you that work iniquity” (Matthew 7:22-23). Here, the Lord Jesus condemned them, saying that they would have misfortune, and branding them as evil-doers. So it is clear that when God begins His new work, if we don’t have a seeking heart but rather condemn and blaspheme it and refuse to follow His footsteps, then we will become ones who resist God.

From this we can see that the work of God does not remain unchanging but is always moving forward. He will perform new work according to the needs of us mankind. Therefore, the measure of whether we are God’s followers is based on whether we keep pace with His work. When God does a new work and releases a new light, only those who can put aside their old conceptions, listen and obey, and closely follow the work of the Holy Spirit are God’s followers and approved by Him. This exactly fulfills what the Bible says, “These are they which follow the Lamb wherever he goes. These were redeemed from among men, being the first fruits to God and to the Lamb” (Revelation 14:4). On the contrary, those who hold onto their old means of belief and fail to follow God’s actual work cannot obtain the work of the Holy Spirit, neither can they be regarded as ones who follow God’s work.

Looking at myself, I have fallen into darkness now, at a loss what to do. I feel like I have been forsaken by the Lord, like I’m no longer His follower, and this causes me to have a sudden pang of sadness. Nevertheless, I’m still yearning for the return of the Lord Jesus day and night, hoping to follow His footsteps. Well, brothers and sisters in the Lord, do you have such desperate hope as I do? Let us pray to the Lord fervently and ask Him to lead us on the path ahead. Many verses in Revelation say, “He that has an ear, let him hear what the Spirit says to the churches” (Revelation 2:17). The prophecies covered in Revelation all concern the future work of God. These words indicate that the Lord will once again speak to the churches and His believers when He comes back. So, we should be careful at all times, pay attention to where there is the preaching about the word of the returned Lord Jesus. Like Peter and the other disciples, who recognized God’s voice from the Lord’s words, we should seek so as to recognize God’s voice and keep pace with the Lamb’s footsteps and become God’s followers.

What Is the “Hidden Manna”?

How Can Christians Gain the Eternal Blessings?

What Kind of People Can Really Obtain God’s Approval?

I See God’s Wonderful Deeds When I Rely on Him

Can a Sinner Go to Heaven?

Can we Christians who are still sinners go to heaven? How does God approach our sins? Read to learn God’s attitude to sinners and find the way to the heavenly kingdom.

Spiritual Q&A: Can We See the Lord in a Sin-and-confess State?

Although we are forgiven our sins through faith in God, we still live in the cycle of sinning, confessing, and sinning again. Can we see the Lord’s face? Spiritual Q&A will give you the answer.

Why does God still need to do His work of judgment in the last days?

God redeemed mankind in the Age of Grace, so why does He still need to do His work of judgment in the last days? Bible Verse(s) for Reference: “… you …

How to Stop Sinning and Confessing: I Found the Solution

Though he believes in the Lord, he lives in a state of often sinning and confessing. Later, how does he find the way to stop sinning? Read now.