And when Jesus was come into Peter's house, he saw his wife's mother laid, and sick of a fever. And he touched her hand, and the fever left her: and she arose, and ministered to them. When the even was come, they brought to him many that were possessed with devils: and he cast out the spirits with his word, and healed all that were sick: That it might be fulfilled which was spoken by Esaias the prophet, saying, Himself took our infirmities, and bore our sicknesses. 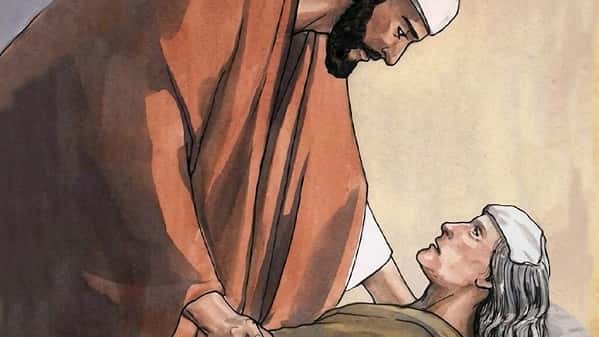 And when he was come to the other side into the country of the Gergesenes, there met him two possessed with devils, coming out of the tombs, exceeding fierce, so that no man might pass by that way. And, behold, they cried out, saying, What have we to do with you, Jesus, you Son of God? are you come here to torment us before the time? And there was a good way off from them an herd of many swine feeding. So the devils sought him, saying, If you cast us out, suffer us to go away into the herd of swine. And he said to them, Go. And when they were come out, they went into the herd of swine: and, behold, the whole herd of swine ran violently down a steep place into the sea, and perished in the waters. And they that kept them fled, and went their ways into the city, and told every thing, and what was befallen to the possessed of the devils. And, behold, the whole city came out to meet Jesus: and when they saw him, they sought him that he would depart out of their coasts.

And he entered into a ship, and passed over, and came into his own city. 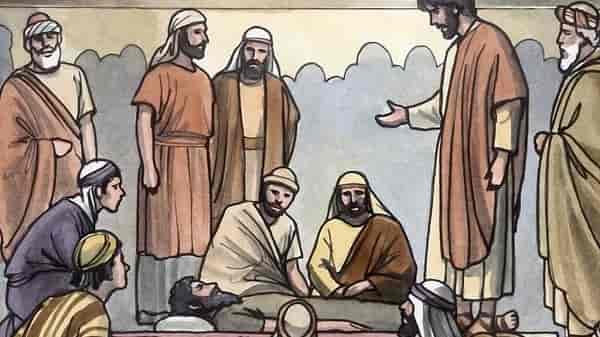 And, behold, they brought to him a man sick of the palsy, lying on a bed: and Jesus seeing their faith said to the sick of the palsy; Son, be of good cheer; your sins be forgiven you. And, behold, certain of the scribes said within themselves, This man blasphemes. And Jesus knowing their thoughts said, Why think you evil in your hearts? For whether is easier, to say, Your sins be forgiven you; or to say, Arise, and walk? But that you may know that the Son of man has power on earth to forgive sins, (then said he to the sick of the palsy,) Arise, take up your bed, and go to your house. And he arose, and departed to his house. But when the multitudes saw it, they marveled, and glorified God, which had given such power to men.

The Healing Touch of Jesus

While he spoke these things to them, behold, there came a certain ruler, and worshipped him, saying, My daughter is even now dead: but come and lay your hand on her, and she shall live. And Jesus arose, and followed him, and so did his disciples.

And, behold, a woman, which was diseased with an issue of blood twelve years, came behind him, and touched the hem of his garment: For she said within herself, If I may but touch his garment, I shall be whole. But Jesus turned him about, and when he saw her, he said, Daughter, be of good comfort; your faith has made you whole. And the woman was made whole from that hour.

And when Jesus came into the ruler's house, and saw the minstrels and the people making a noise, He said to them, Give place: for the maid is not dead, but sleeps. And they laughed him to scorn. But when the people were put forth, he went in, and took her by the hand, and the maid arose. And the fame hereof went abroad into all that land.

And when Jesus departed there, two blind men followed him, crying, and saying, You son of David, have mercy on us. And when he was come into the house, the blind men came to him: and Jesus said to them, Believe you that I am able to do this? They said to him, Yes, Lord. Then touched he their eyes, saying, According to your faith be it to you. And their eyes were opened; and Jesus straightly charged them, saying, See that no man know it. But they, when they were departed, spread abroad his fame in all that country.

As they went out, behold, they brought to him a dumb man possessed with a devil. And when the devil was cast out, the dumb spoke: and the multitudes marveled, saying, It was never so seen in Israel. But the Pharisees said, He casts out devils through the prince of the devils.

The Jesus' life story about the Lord of the Sabbath. "For the Son of man is Lord even of the sabbath day."

It is recorded in the Bible story of The Chief Priests Bribing the Soldiers to Fabricate Rumors that after the priests knew the Lord Jesus was resurrected, they bribed the soldiers to cover up the truth of the Lord’s resurrection.