The Warning of Sodom

Reviewing the History and Seeking God’s Will

The Bible records: “Then the LORD rained on Sodom and on Gomorrah brimstone and fire from the LORD out of heaven; And he overthrew those cities, and all the plain, and all the inhabitants of the cities, and that which grew on the ground” (Genesis 19:24–25). After reading these verses, we feel God’s majestic, wrathful and unoffendable disposition, and that the evil and sins of Sodom are ignoble. Such a gang of desperate people who dared to flagrantly oppose God and shout wildly, and such a city inhabited by filth and wanton crowds of demons, they of course deserve to suffer God’s just retribution? They have only themselves to blame. However, behind God’s wrath, which is, behind the fact that Sodom this prosperous city was instantly burnt to ashes, is there still any truth that we can seek and explore? Is there God’s will and demands for us that we should understand and know? Let us review that history recorded in the Bible.

God Despises the Wicked and Cares About the Righteous.

From the above conversations between God and Abraham, we can see: Not only did these conversations reveal God’s righteous disposition, but moreover they revealed His great mercy and tolerance for mankind. Although God destroyed Sodom because its people’s evil deeds had gone up before God, yet God would not destroy it for the sake of fifty righteous people or even for the sake of ten. Hereby, God’s utmost tolerance and mercy were amply demonstrated to us. However, the heart-breaking thing was that there were not even ten righteous people in such a big city. The sins of the city ran so rampant that God had to destroy it.

What kind of city on earth was Sodom? I saw some words on a book: “From a human perspective, Sodom was a city that could fully satisfy man’s desire and man’s evil. Alluring and bewitching, with music and dancing night after night, its prosperity drove men to fascination and madness. Its evil corroded the hearts of people and bewitched them into degeneration. This was a city where unclean spirits and evil spirits ran amok; it brimmed with sin and murder and was filled with a bloody, putrid scent. It was a city that chilled people to the bone, a city that one would shrink back from” (“God Himself, the Unique II”). From these words, we can see: Sodom is an extremely evil city. The people there were fascinated by its prosperity. Man and woman, old and young, all lived in sin, without reason and humanity. And the whole city presented a scene of feasting and revelry, with singing and dancing night after night. The people in Sodom, driven by evil lusts, lived an extravagant life and couldn’t extricate themselves from it. None of them sought the truth or longed for the light, much less was willing to walk out of the evil mire. This city was full of blood and murder, with unclean and evil spirits running amuck. The destruction of such a city was a better manifestation of God’s righteousness and holiness.

Of course, we all know that there was a righteous person, Lot, in the city. God didn’t forsake him, but arranged for messengers to save him. From this, we can see that when God does a thing He has a principle, and He never does it randomly. When God is profoundly angry and loathes the wicked, He still doesn’t forget to care about these righteous people who listen to His words and obey Him. Even if there is only one righteous person, God will still give mercy to him. This is enough to show that God’s righteousness and mercy are inextricable: God punishes the wicked while doing His best to save each and every person who can be saved.

The Enemy of God Will Eventually Be Destroyed.

It is recorded in the Bible, “But before they lay down, the men of the city, even the men of Sodom, compassed the house round, both old and young, all the people from every quarter: And they called to Lot, and said to him, Where are the men which came in to you this night? bring them out to us, that we may know them. And Lot went out at the door to them, and shut the door after him, And said, I pray you, brothers, do not so wickedly. Behold now, I have two daughters which have not known man; let me, I pray you, bring them out to you, and do you to them as is good in your eyes: only to these men do nothing; for therefore came they under the shadow of my roof. And they said, Stand back. And they said again, This one fellow came in to sojourn, and he will needs be a judge: now will we deal worse with you, than with them. And they pressed sore on the man, even Lot, and came near to break the door” (Gen 19:4–9). 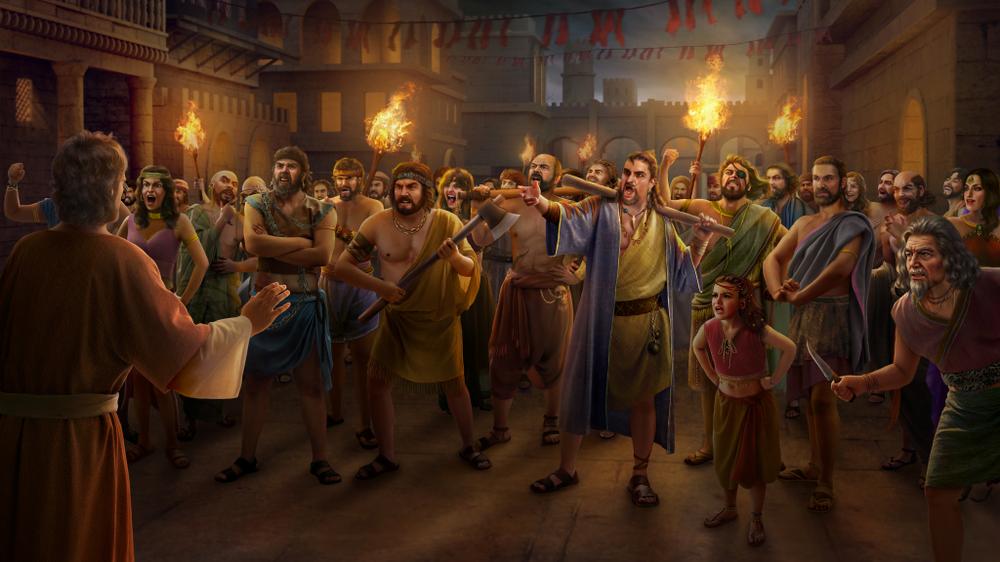 From these verses, we can see: The people from every part of Sodom, both the old and the young, gathered around the house. Seeing the two messengers, the people in Sodom neither asked why they went there nor asked whether they came to convey God’s will. Instead, they besieged the two messengers without any explanation and intended to brazenly harm them. Even though they didn’t know the two messengers, and even though Lot begged them piteously and tried to give his two daughters in exchange, yet they still didn’t leave the two messengers alone. The Bible only recorded one case as such, but it fully exposed the true vicious nature of the people in Sodom. They considered everybody and everything beneath their notice, ran amuck; they took pleasure in devouring and harming people, even they were God’s servants. It can be seen that what their essential nature was: Weren’t they a gang of devils who specialized in being the enemy of God?

God’s word says: “A humanity had become corrupt to the extreme. They did not know who God was or where they had come from. If you mentioned God, these people would attack, slander and blaspheme. Even when God’s servants had come to spread His warning, these corrupt people not only showed no signs of repentance; they did not abandon their wicked conduct. To the contrary, they brazenly harmed God’s servants. What they expressed and revealed was their nature and substance of extreme enmity toward God. We can see that these corrupt people’s resistance against God was more than a revelation of their corrupt disposition, just as it was more than an instance of slandering or mocking stemming from a lack of understanding of the truth. Neither stupidity nor ignorance caused their wicked conduct; it was not because these people had been deceived, and it was certainly not because they had been misled. Their conduct had reached the level of flagrantly brazen antagonism, opposition and uproar against God. Without a doubt, this kind of human behavior would enrage God, and it would enrage His disposition—a disposition that must not be offended. Therefore, God directly and openly released His wrath and His majesty; this is a true revelation of His righteous disposition.”

It was precisely because the people of Sodom were supremely corrupted that in God’s eyes, the whole city of Sodom deserved to be cursed, detested, and even more be destroyed by God. They ignored God’s existence, looked down on God’s anger; they didn’t fear God’s punishment, and further, didn’t accept God’s warnings; they only blindly resisted God. So how could their evil deeds not provoke God’s wrath? God’s words told us: “the fire sent from heaven did not only destroy the entire city of Sodom and the iniquity-filled people inside it, nor did it only destroy all things inside the city that had been stained by sin; even more so, this fire destroyed the memories of humanity’s evil and resistance against God. This was God’s purpose in burning the city down.”

Compared with Sodom, this dazzling world we live in today really gives us the creeps. The degree of its evil, we can even say, is no lower than that of Sodom. However, how many just persons are there like Lot who could deny himself to protect the angels? Should we watch our steps and pay attention to God’s will?

Now, the last days has arrived, and how does God save us from this filthy world and make us live in God’s blessings? Revelation 3:20 said: “Behold, I stand at the door, and knock: if any man hear my voice, and open the door, I will come in to him, and will sup with him, and he with me.” And Revelation 22:6–7 said: “And he said to me, These sayings are faithful and true: and the Lord God of the holy prophets sent his angel to show to his servants the things which must shortly be done. Behold, I come quickly: blessed is he that keeps the sayings of the prophecy of this book.” From these verses, we can see: When God comes in the last days, He will speak, and seek those who can listen to His voice, accept His utterance and attend the feast of the kingdom of heaven with Him. So, when we hear God’s messengers convey God’s will, what attitude should we take? The Lord Jesus said: “Blessed are the poor in spirit: for theirs is the kingdom of heaven. … Blessed are the pure in heart: for they shall see God” (Matthew 5:3, 8). Whether we are wise virgins or foolish virgins, it depends on our own choice.

• Now Is as in the Days of Noah: Signs of the Lord’s Return Have Appeared

• In What Way Will the Lord’s Return Happen in the Last Days?

• Will the Lord Jesus Come as a Thief or Come Upon a Cloud?

Why Did the Pharisees Serve God but Resist God?

Are Pastors and Elders Really All Established by the Lord?

In the accounts of the Bible, were there ten servants of God in Sodom? No, there were not! Was the city worthy of being spared by God? Only one person…

It is recorded in the Bible that God once destroyed Sodom with brimstone and fire. As we can imagine, the scene must have been startling.